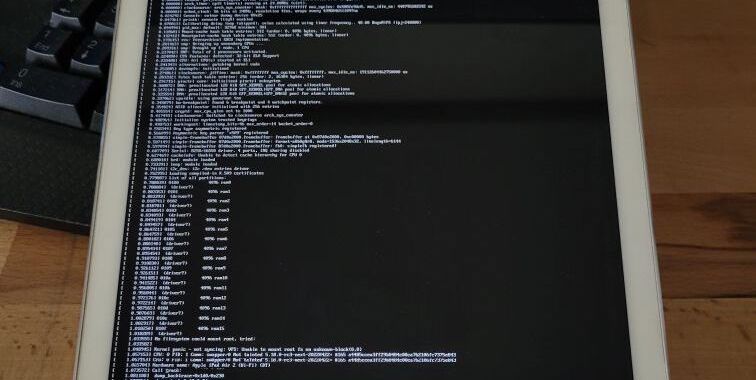 Have an old iPad lying around? You might be able to make it run Linux soon

If you have a 2013- or 2014-era iPad sitting around unused because it’s not getting updates from Apple anymore and has stopped running the apps you need, some developers are working on an alternative software solution for you. Developer Konrad Dybcio and a Linux enthusiast going by “quaack723” have collaborated to get Linux kernel version 5.18 booting on an old iPad Air 2, a major feat for a device that was designed to never run any operating system other than Apple’s.

The project appears to use an Alpine Linux-based distribution called “postmarketOS,” a relatively small but actively developed distribution made primarily for Android devices. Dybcio used a “checkm8” hashtag in his initial Tweet about the project, strongly implying that they used the “Checkm8” bootrom exploit published back in 2019 to access the hardware. For now, the developers only have Linux running on some older iPad hardware using A7 and A8-based chips—this includes the iPad Air, iPad Air 2, and a few generations of iPad mini. But subsequent Tweets imply that it will be possible to get Linux up and running on any device with an A7 or A8 in it, including the iPhone 5S and the original HomePod.

This isn’t the only project devoted to running Linux on Apple’s hardware. One project, Asahi Linux, has been dedicated to reverse-engineering support for the M1 chips in Apple’s Macs and sending the patches upstream so that they can be integrated into the Linux kernel. Another, Project Sandcastle, has a build of Android up and running on an iPhone 7. Apps like iSH will give you a Linux shell running on top of iOS or iPadOS—not the same as running Linux on the hardware directly, but useful in some circumstances.

Development work on this latest Linux-on-iDevices effort is still in early days. The photos that the developers shared both show a basic boot process that fails because it can’t mount a filesystem, and Dybcio notes that basic things like USB and Bluetooth support aren’t working. Getting networking, audio, and graphics acceleration all working properly will also be a tall order. But being able to boot Linux at all could draw attention from other developers who want to help the project along.

Compared to modern hardware with an Apple M1 chip, A7 and A8-powered devices wouldn’t be great as general-purpose Linux machines. While impressive at the time, their CPUs and GPUs are considerably slower than modern Apple devices, and they all shipped with either 1GB or 2GB of RAM. But their performance still stacks up well next to the slow processors in devices like the Raspberry Pi 4, and most (though not all) A7 and A8 hardware has stopped getting new iOS and iPadOS updates from Apple at this point; Linux support could give some of these devices a second life as retro game consoles, simple home servers, or other things that low-power Arm hardware is good for.