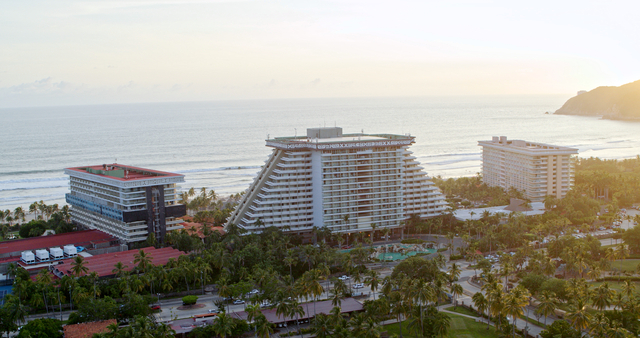 Anarchy has a bad reputation. But if you’ve taken a look at the state of the world recently—from the rise of authoritarianism and the acceleration of climate change to the devolution of the Supreme Court and this past week’s roller-coaster ride with Boris Johnson in the UK—then you might well have found yourself wondering whether anyone, anywhere, is really fit to lead their fellow human beings. In doing so, you opened your mind, maybe just a crack, to anarchism.

In that sense, the spirit that animates Anarchapulco, the annual conference of self-identified anarchists that is the subject of HBO’s messily made but often fascinating documentary series The Anarchists, is as mainstream as it’s ever been. For American individualists, the macho strain of anarcho-capitalism (ancap to its adherents) that galvanized a community of expats in the glamorous and dangerous Mexican city might seem especially appealing. Unlike its socialist forerunner, this Randian vision for smashing the state requires no interdependence, mutual aid, or renunciation of private wealth; in fact, one common ancap goal is to amass enough cash to keep the government off your back. This convergence of individual liberty and unchecked greed raises the show’s most compelling, if not its most rigorously investigated, questions: Can a group of people unbound by shared legal or financial obligations ever really function as a community? Is you can’t tell me what to do, in practice, a viable political philosophy?
[time-brightcove not-tgx=”true”]

Premiering July 10, The Anarchists—another title to add to the long list of intriguing docuseries that probably would’ve made better focused, feature-length docs—circles loosely around these dilemmas throughout six episodes that alternate between origin story, character study, true crime, and trend report. Filmmaker Todd Schramke spent six years documenting the ancap scene in Acapulco, beginning with the first-ever Anarchapulco, a scrappy gathering of some 150 people eager to liberate themselves from such “statist” institutions as taxes, the military, and central banks. In chronological fashion, with early episodes structured around each year’s conference rather than any larger argument or theme, the series traces Anarchapulco’s meteoric, crypto-fueled rise and the equally rapid dissolution of the community that grew up around it.

The characters are captivating—so much so that their personalities often overpower Schramke’s own perspective. Anarchapulco founder Jeff Berwick rode the dot-com wave of the late ’90s, partied his way around the world, fell hard for conspiracy theorist G. Edward Griffin’s Federal Reserve takedown The Creature from Jekyll Island, and settled in Acapulco to live his freest life. (Schramke barely touches the question of whether Mexico is a more laid-back country than the U.S. for everyone or just for well-off white Americans.) “Governments are the cause of almost every major problem on Earth,” Berwick opines. It’s hard to argue against, but as The Anarchists suggests, an ancap Earth would probably have a whole different set of major problems.

Nathan and Lisa Freeman, an Acapulco-curious couple who are unschooling their kids, join the cast of characters when they show up to the 2015 event and realize that the constantly inebriated Berwick could use some organizational help. Although Nathan’s devotion to the conference strains the marriage, forcing Lisa to do the bulk of the child-rearing, they come across, in early episodes, as the most stable members of a volatile circle. At the other end of the spectrum are a young, dreadlocked, pseudonymous couple, Lily Forester and John Galton. (He isn’t the only person in The Anarchists to borrow a nom de guerre from the hero of Atlas Shrugged. There’s also a Juan Galt.) Genuine fugitives who fled to Acapulco after a marijuana-related arrest, only to find its community excessively commercialized and insufficiently radical, they eke out a living in the underground economy while expats with deeper pockets, like Berwick and the Freemans, strike gold in the mid-2010s crypto boom.

As you might expect, people who’ve arranged their lives around the conviction that they should get to do whatever they want don’t turn out to be so great at communication, cooperation, or compromise. (Nathan’s official title is Chief Cat Herder.) Factions form. Alienated from the crypto-juiced spectacle of a thriving Anarchapulco, which eventually attracts speakers as high-profile as Ron Paul, John and Lily found a grassroots alternative, Anarchaforko. Tensions among Anarchapulco’s own leaders, which might’ve been foreseen considering the definitional anarchist disdain for leaders, escalate. At the same time, the community expands. Along with idealists like Erika Harris, a Black woman who starts to feel othered in this milieu, there are clearly unhinged folks like Paul Propert, a veteran with a violent, obsessive temper.

Then there’s a murder, and The Anarchists becomes a true-crime doc for a few episodes. Tragically, it isn’t the only unnatural death Schramke captures among the anarcho-capitalists of Acapulco. Between this internal turmoil and the 2018 crypto crash, the community falters. A supposedly leaderless society built on a foundation of privilege, over top of a Mexican vacation destination whose native population lives under constant threat from organized crime, ends up a failed experiment. And everyone seems to come away with a different lesson. In the final episode, Berwick is countering conference attendees’ fear of traveling to a place where one of their comrades was killed by insisting that “men need to become much stronger men again.”

Although he incorporates his experience and provides exposition through sporadic voiceovers, Schramke shies away from offering his own analysis of the conflicts he witnesses. That leaves a lot of loose ends. He digs into several characters’ pasts and finds broken families, childhood trauma, substance abuse, and more, without ever synthesizing how such histories might lead a person to ancap ideology. He dabbles in exploring the community’s foundational beliefs but relies on its current and former adherents to point out their blind spots; as a result, the series’ analyses of elements like class, identity, expatriation, and whether it’s even possible to build a revolutionary movement around the sovereignty of the individual remain extremely limited.

Still, Schramke reaps remarkable candor from relationships with subjects that evidently deepened over the course of years’ worth of filming. And despite its overstuffed structure, The Anarchists lands in an illuminating place. “What is community?” wonders Harris, one of the doc’s most insightful participants and someone from whom I’d have liked to hear more. “If you can’t rally around someone when they’re down, what is the frickin’ point?” As geopolitical chaos drives more and more people to increasingly extreme ideologies, it’s worth raising the question lest we be left to live with the answer.