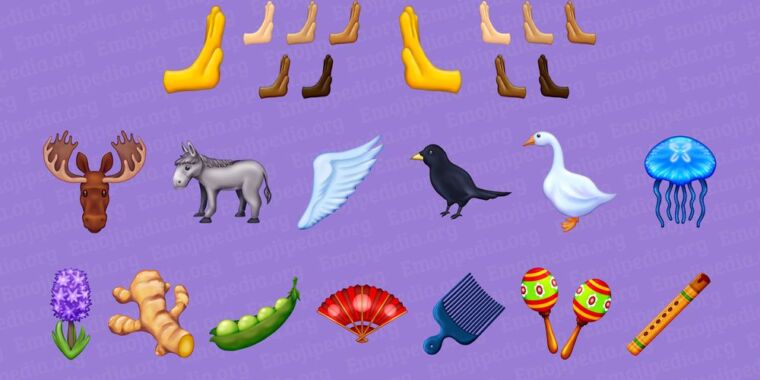 Ahead of World Emoji Day, the emoji experts at Emojipedia have compiled and published sample images of the 31 new emoji characters slated for inclusion in version 15.0 of the Unicode standard. Among the new emoji we can expect to see on our phones and other devices later this year: a plain pink heart (along with gray and light blue versions), high-fives, a vibrating face, a moose head, a ginger root, maracas, a Wi-Fi symbol, a jellyfish, and a horrible goose.

There are a few more hurdles for these emoji to jump before we can actually start sending them to each other. First, they’ll need to make it into the final version of Unicode 15.0, currently slated for release in September 2022. Then, software developers will need to create their own designs for these characters and release them via software updates, something that usually happens several months after the Unicode spec is finalized.

As Emojipedia notes, the proposed list of new emoji is notable for its small size—"in fact, it is the smallest number of new emojis that Unicode has ever recommended at any one time." It’s also the first draft emoji list with no new people emoji, though it does include new hand gestures, and the last few versions of the Unicode spec have collectively added hundreds of new people emoji. The Emoji Subcommittee has been pushing in recent years to rein in the number of new emoji included in any given release, citing how infrequently most emoji characters are used and how much work it is for companies like Apple, Microsoft, Google, and Samsung to maintain ever-growing lists of emoji in their software.