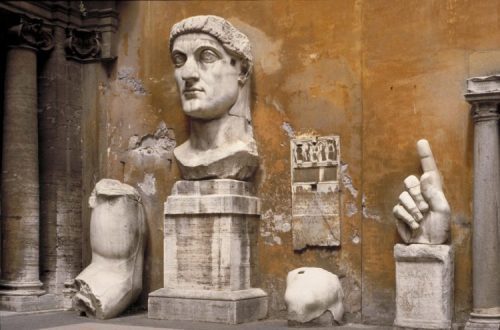 History as Fragment: The Unworking of System – JHI Blog

The perennial discussion which announces an ‘end of history’ has, once again, been reignited. Francis Fukuyama is back on the scene with another rendition. With a dash of romantic irony, he wants to convince us that this time we are at the end of the end of history. However, the intellectual historian will perhaps be disappointed to find out that he has been beaten to the punch. In fact, at the same time that Fukuyama was writing his original version thirty years ago, Jean Baudrillard was already describing “a paradoxical process of reversal,” where history, having reached its limit, escapes its own end (11). For Baudrillard, the leap required to reach the end is likened to jumping over one’s shadow.

That is to say, “the whole problem of speaking about the end (particularly the end of history) is that you have to speak of what lies beyond the end and also, at the same time, of the impossibility of ending” (110).  Strategically, in his Illusions of the End, Baudrillard refrains from mentioning the name of the author his own thesis means to refute. If we are unable to even speak of the end of history, then much like Foucault, he seems to think that we are better off forgetting Russian-French philosopher Alexandre Kojève.

In his 1930s seminars which gave rise to his Introduction to the Reading of Hegel, Kojève famously argued that we had already reached the end of history. His interpretation is based on the assumption that, as Pierre Macherey argues, “in the history of both the world and thought, Hegel represents the terminal moment in which the circle of human reality closes” (61). Indeed, countless statements can be found in Kojève’s seminars to support this. Most well-known is a footnote added to his Introduction—the same one that inspired Fukuyama’s “disconcerting and tardy by-product,” as Derrida put it—which argues that the end of history is concomitant with the disappearance of human discourse. The result of the latter is not only the endpoint of philosophy as the search for wisdom but, paradoxically, the dissolution of wisdom itself. But does this not immediately beg the question? If the end of history is, indeed, the end of discourse, philosophy and wisdom, then how exactly did Kojève think he could articulate this end?

What most accounts of Kojève tend to skip over is that in another, much less read, footnote we find an implicit acknowledgment of this paradox. Appended to his second lecture of the 1938 academic year entitled “Philosophy and Wisdom,” Kojève argues that the thesis that history has run its course depends upon being able to verify “the circularity of the [Hegelian] system in its entirety.” But it is precisely here that he says something unexpected. Instead of affirming its absolute closure, Kojève asserts that “the non-circularity of Hegel’s system is perfectly obvious,” while adding that he is only able to say so “in passing and without proof” (98). It is a startling declaration given his many other statements regarding the closure of the Hegelian circle as the definitive cessation of history.

Indeed, it is not surprising that this other footnote has been passed over in silence since it presents us with a fundamental challenge to the way we usually read Kojève. Far from offering a theory of systematic completion, the fact that he can only gesture towards the lack of circularity in the Hegelian system—without providing any demonstration—is indicative of an alternative approach to his eschatology: neither within nor beyond philosophy, the end requires a paradoxical expression of the inexpressible.

This tension inherent in his account of system is something which extends beyond his idiosyncratic interpretation of Hegel. Despite all of his talk of satisfaction and perfection, Kojève himself managed to publish only two books in his life. Various reasons have been put forth which attempt to account for this hesitation. However, it is the explanation provided by Kojève himself which is most compelling. In the second of his two published texts, Essai d’une histoire raisonnée de la philosophie païenne, a book said to contain a ‘complete exposition’ of his Hegelian system, Kojève argues that “serious philosophers have generally refrained from publishing (themselves) their drafts [brouillons], i.e., the still too imperfect versions of the [systematic] exposition which is supposed to be perfect” (183).

Of course, it is necessary for the philosopher to constantly work and rework the details of their system as they gradually perfect it. Yet, this necessity presents the philosopher with a methodological difficulty. If a system qua system demands completion, then how can it be presented as a gradual and fragmentary process without contradicting its basic premise? Faced with this dilemma, Kojève points toward the method of German idealist philosopher, F.W.J. Schelling, who “was the first to have done an ‘apprenticeship in public,’ showing that it is good form to ‘evolve’ even in philosophy” (183).

In in his 1809 investigation on the problem of human freedom, Schelling described his own philosophy “as fragments of a whole” (5). This fragmentary presentation of Schelling’s work has lead some to read his corpus as a series of unconnected stages which, because of their incomplete state, were superseded by the system of Hegel. At the same time, it can be argued that if Schelling never produced a complete system it was not owing to any specific philosophical shortcomings but, rather, because of the way he understood the idea of system itself.  Thought within an irresolvable tension, he maintained that it was precisely because his system “was not completed that its genuine intent has been understood by no one or by very few.”

It seems to me that something comparable can be said in regards to Kojève’s philosophy. Similar to Schelling, all of his posthumously published texts are incomplete stages of a larger development. This is acknowledged by Kojève repeatedly throughout his Nachlass. To take one example, in his 1931 text, Atheism, he writes that “what I am writing here, strictly speaking, is only a draft of my philosophy and, thus, not final.” Some scholars have taken these warnings to mean that there is no system present in Kojève. However, what I argue is that, far from failing to articulate a complete system, the fragmentary character of Kojève’s work—a series of brouillons— represents his understanding of system itself. The brouillon is the kernel around which his thought orbits: a fragmentary expression of system.

At first glance, system and fragment appear antithetical. Yet, German Romanticism—a crucial part of the post-Kantian landscape which Kojève knew exceptionally well—assumed the task of philosophical completion in conjunction with the fragment. The Frühromantiker, a group of Jena ‘Romantics’ founded by the Schlegel brothers, initiated and employed the fragment as a genre of writing that problematizes the idea of system. Philippe Lacoue-Labarthe and Jean-Luc Nancy in The Literary Absolute, explain that “the co-presence of the fragmentary and the systematic has a double and decisive significance: it implies that both the one and the other are established in Jena within the same horizon, and that this horizon is the very horizon of the System” (42).

In order for the fragment (das Fragment) to constitute the properly ‘romantic’ vision of system it must be be distinguished from the broken segment (das Bruchstück), a separate part of a larger whole. At the same time, as a literary device the fragment is also different from the epigram or classical maxim, or, at least, is not reducible to them. Whereas these forms strive, despite their formal brevity, to be complete in themselves, the fragment is conceived as a continual striving toward systematic completeness while internalizing the impossibility of ever reaching this goal.

The fragment, as it was conceived in Jena, is better understood as a practice which operates in opposition to the the rationalism of Kant and the immediate post-Kantians such as F.H. Jacobi or J.G. Fichte. It is a philosophical form of expression which aims to challenge the idea of systematic completion. For thinkers like Friedrich Schlegel, Novalis, and Schelling, there is a necessary tension between the graspability of the Absolute and the impossibility of a philosophy based on an absolute principle.

The ‘romantic’ conception of fragment seeks to express the paradoxical position of what Stella Sandford calls “both a philosophical limit and its surpassing.” In Athenaeum fragment 53, Schlegel argues that “both having and not having a system are fatal to the spirit. Thus, the spirit must resolve to unify the two.” Within this tension, the fragment is mobilized as a literary device that alludes to, but never captures, systematic closure. Comparing the fragment to a kind of architectonic wit (Witz) in Athenaeum fragment 383, Schlegel writes that “in spite of its perfection, it must seem as though it lacks something.” Similar to what Schelling calls the Ungrund of the Absolute, the fragment thus is a form of completion that designates its own incompletion.

It is within this context that Maurice Blanchot claims that one of German Romanticism’s tasks was “to introduce a totally new mode of completion” (518). What interests Blanchot is the idea of an inherent form of incompletion indicating a movement beyond itself. While linking the fragment to a particular practice of writing, he understands the fragment as deriving out of a lack in an otherwise perfect system. It is that which “breaks the seal of unity by, precisely, not breaking it” (61).  According to Blanchot, the fragment must therefore aspire to form a completed work while, at the same time, performing a kind of ‘unworking’ (désoeuvrement).

If the fragment represents a form of incompletion that denotes its own movement beyond itself toward completion, then désoeuvrement must be understood as the interruption that situates incompleteness in its proclivity towards closure. More than simple idleness, unworking aims to present work insofar as it contains its own lack. Yet, as Agamben correctly points out, the concept of désoeuvrement first appears in twentieth-century philosophy, not in Blanchot, but in Kojeve.

Agamben argues that Kojève employs the term as a description for the ‘being without work’ of the philosopher situated on the precipice of the end of history. It is within this same topos that I argue Kojève’s entire corpus should be read: a philosophy which occupies the impossible place between the completion of the (Hegelian) system of philosophy and the articulation of this end. Rather than proceeding as if Kojève’s incomplete drafts were accidental and involuntary, we should approach the brouillon as a determinate and deliberate statement describing his philosophical method. Far from demonstrating the end of history, politics or even philosophy as such, the fragmentary character of his writing invites us to consider the paradoxical ineffability that accompanies any discourse that strives for closure.

As a completion which acknowledges its incompletion, Kojève’s end of history thesis must itself be read as a brouillon which expresses its inability to grasp its own aim. In situating Kojève’s thought, not at the definitive end of history, but within a ‘romantic’ moratorium—or désoeuvrement—we might also be wise to keep in mind another warning he pegged to his work: “people content with themselves and especially with their philosophy are not only bad philosophers and people but they are also not very interesting.”

Kyle Moore holds a doctorate in economics from the Erasmus University Rotterdam and a MA in sociology from the London School of Economics. His previous work included a postdoctoral fellowship at the LSE where he studied economic systems. Currently, he is pursuing a a second PhD in philosophy at the Centre for Research in Modern European Philosophy at Kingston University London where his research focuses more broadly on the philosophical, political, and economic idea of system, especially in the work of Alexandre Kojève.