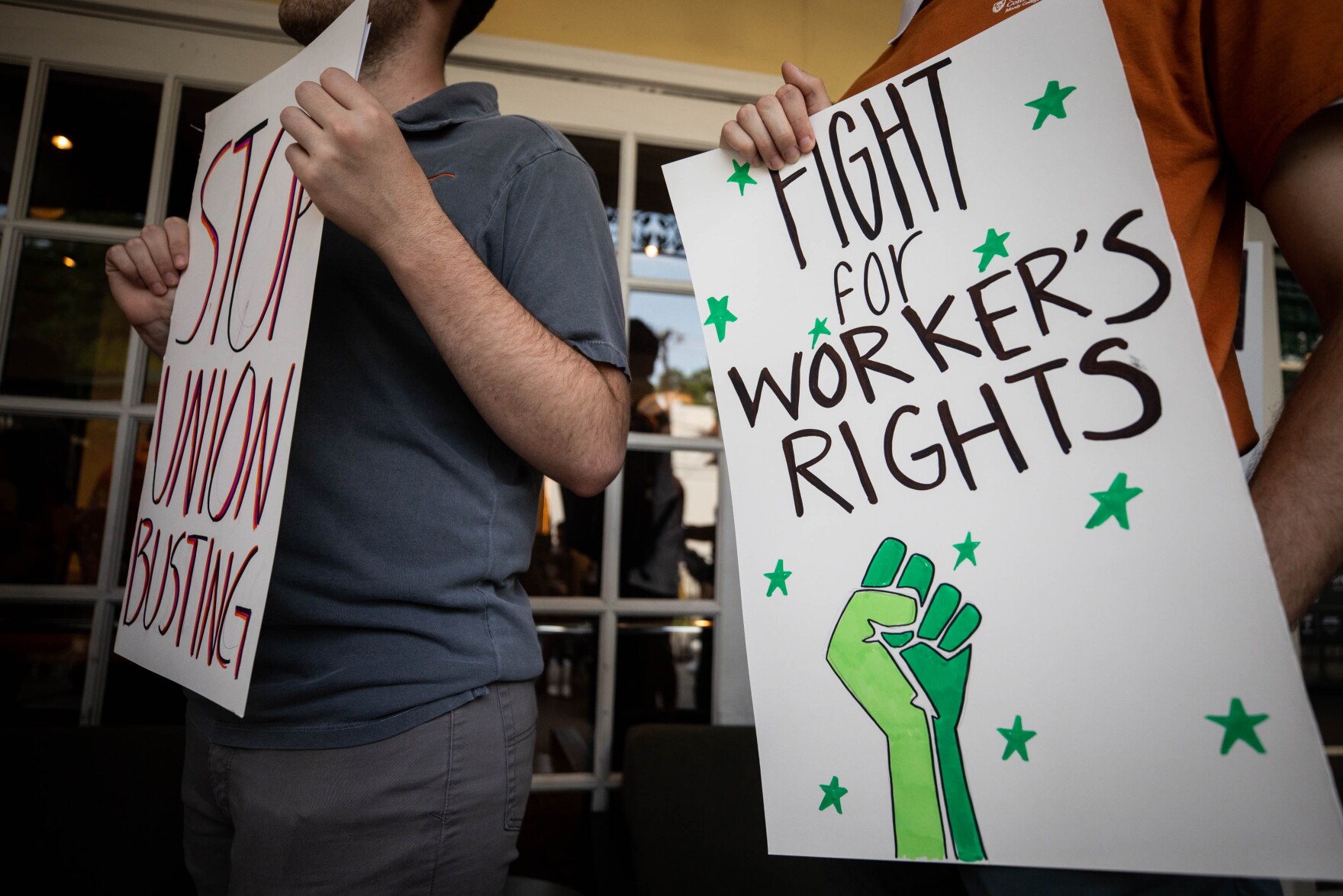 How do employees unionize in a right-to-work state like Texas?

From Amazon workers on Staten Island, N.Y., to Starbucks staff on UT’s West Campus, organized labor movements have been gaining steam across the country. A Gallup poll last year found 68% of Americans support unions, once on the decline in the U.S.

Many factors have contributed to workers’ recent desires to unionize, including unsafe working conditions during the pandemic; pay that doesn’t keep up with soaring inflation rates; and an increased focus on social justice and civil rights issues.

“There are things that we, in our daily work lives, take for granted that have arisen because of unions,” said Michael Z. Green, a labor law professor at Texas A&M University School of Law. “Like a five-day workweek instead of a seven-day workweek and payment for health care benefits by employers. Those kinds of things have arisen in the workplace because of the efforts of unions to provide better working conditions for employees.”

And yet, Texas ranked among the 10 states with the lowest rates of union membership in 2020. In fact, since 1989, when state data became available, union membership rates in Texas have consistently been below the U.S. average.

As you sift through the news about labor unions popping up all around, we’re here to clear up a few questions about how they work in Texas.

What is a union?

At the most basic level, a union can be defined as an organized group of workers formed to protect and further employee rights and interests. Unions represent employees’ interests to management and negotiate terms regarding wages, hours, conditions of employment and more.

If an employee has a position that falls under the “bargaining unit,” that means they are part of the group that will negotiate with the employer over job conditions.

“Unions give an opportunity to collectively support employees and give voice to them without having to be subjected to the individual nature and whims of an employer,” Green said.

Are unions legal in Texas?

Yes. Employees’ right to form or join unions is federally protected under the National Labor Relations Act, passed in 1935. However, Texas is one of 27 states deemed a “right-to-work” state. This means that under the Texas Labor Code, you cannot be denied employment because of your union status. Legally, whether or not you belong to a union is your choice.

Once a union is certified, it has a legal duty to represent every employee in a position covered by the union — regardless of whether an employee is a member and pays union dues. This is thought to weaken a union’s power because it doesn’t always receive every employee’s full support. Green said policies like these might contribute to the notion that Texas is not a “union-friendly” state.

“If there is an issue, maybe a disciplinary action or something of that nature, the union has a duty to represent the interests of that employee and that can be costly,” Green said. “Being able to have union members pay union dues is an important factor.”

How is a union formed?

It depends on the union. Generally, a group of employees interested in organizing make contact with a labor organization. (The Texas AFL-CIO, Texas American Federation of Teachers, and the Texas State Employees Union are just a few.) An organizing committee is formed to help lead the movement by identifying the demands a union would bargain for. It would also determine which employees are covered by the union. Typically, some sort of campaign would take place to educate and encourage employees to support the union.

Then there are two ways to certify the union. If at least 30% of workers sign cards or a petition saying they want a union, the National Labor Relations Board (NLRB) will conduct an election. If a majority of voters support a union, the NLRB will certify the union as the representative for “collective bargaining.” That is when the organized employees negotiate with their employer over work hours or pay, for example.

Alternatively, an employer could voluntarily recognize a union based on signed cards indicating a majority of employees want the union to represent them.

“Then a union begins to represent those employees and the bargaining process begins,” Green said. “There is this duty now established for the employer to bargain with the union. The employer generally cannot make unilateral changes to wages and hours just for the conditions of employment. They have a duty to bargain, and they must bargain in good faith with the union about it.”

Can you be punished for unionizing?

Technically, no. The NLRB protects the rights of employees to engage in “concerted activity,” which is when two or more employees take action to advocate for themselves regarding terms and conditions of employment — or, a single employee acts on behalf of the group.

However, Texas, and most every state in the U.S., has an “employment-at-will” policy. This means that an employer can fire an employee at any time for no reason unless it violates state or federal protections based on race, gender, age or other factors. Green said there is evidence to suggest employers that don’t support a union often fire employees who engage in unionizing, though they cite a different reason or even no reason at all.

Union organizers at Starbucks in Austin, for example, plan to file a complaint with the NLRB because a shift supervisor who supported the union was fired for being late. The organizers say the employee’s tardiness was not the real reason for the termination—union activities were.