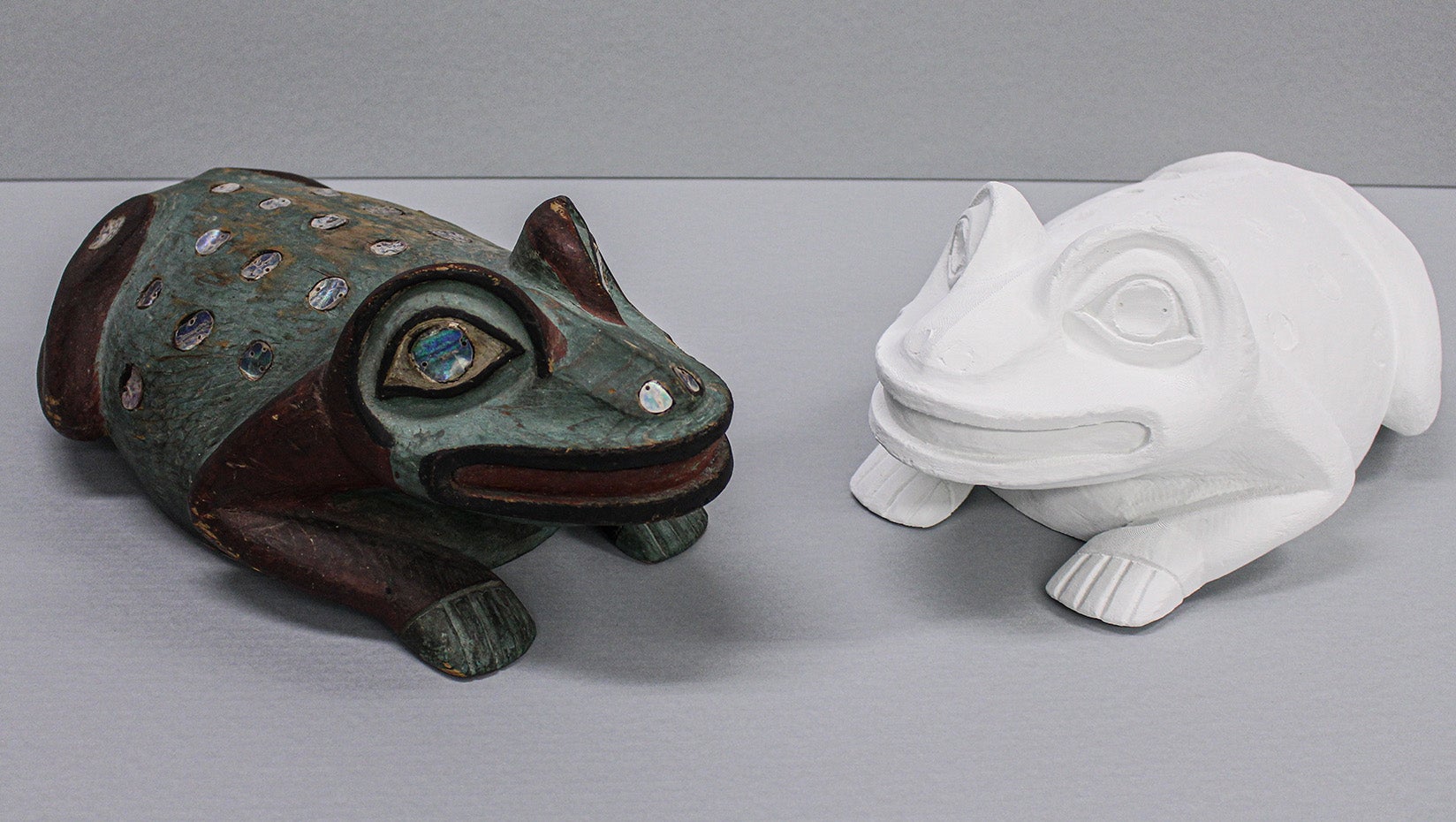 In a cavernous Smithsonian Institution workshop, a team of imaging experts laser scans a small, hand-carved cedar hat. It was crafted more than 140 years ago from a solid piece of wood and depicts a bear with large copper eyes. In a few hours, the experts will have a videoconference with members of the Haida Nation in British Columbia to go over the progress they’ve made on their collaborative goal: creating a digital three-dimensional model of this clan crest hat, an object of significant cultural importance for the Haida.

The project is the latest in a series of similar partnerships between the Smithsonian’s National Museum of Natural History (NMNH) and Indigenous North American groups. Eric Hollinger, tribal liaison at NMNH’s repatriation office, says such groups are increasingly turning to 3-D technology to document and even replicate their cultural objects. “We want to be clear this is not in lieu of repatriation,” the legally mandated return of eligible original objects and Indigenous human remains from museums, Hollinger says. Instead the goal of this work is to help safeguard the legacy of fragile items by creating digital models for preservation and education, as well as physical replicas that can be displayed or even used in ceremonies when originals cannot.

These collaborations started in 2007, when the Stockbridge-Munsee Band of Mohican Indians, the Delaware Nation and the Delaware Tribe of Indians asked NMNH to 3-D print copies of a 17th-century pewter tobacco pipe that the museum was preparing to repatriate. Because cultural strictures required the reburial of the original pipe—a funerary object—tribal officials requested three replicas that could be used to educate people about the pipe’s history and the repatriation. Hollinger worked with the Smithsonian’s Digitization Program Office (DPO) to 3-D print the pipe replicas with silica. Although NMNH had been using 3-D technology to reproduce other objects (such as animal fossils) for years, Hollinger says this was the first time he realized that tribal authorities would be open to replicating culturally sensitive objects.

Back at the workshop in the Smithsonian’s Museum Support Center in Maryland, staff have spent dozens of hours capturing and processing information to create the 3-D model of the Haida bear hat. Using a technique called photogrammetry, E. Keats Webb, an imaging scientist at the Smithsonian’s Museum Conservation Institute, took 1,415 overlapping pictures of the object from every possible angle. The images were fed into software that matched tens of thousands of pixels across the photographs to establish common points among the pictures. The software then used these points to create a map of the hat’s surface, visualized as a mesh of 7.7 million connecting polygons.

Photogrammetry is ideal for capturing high-resolution detail and color with matte materials such as wood. But to create portions of the model that represent shiny surfaces, such as the bear’s outsize copper eyes, the team used a laser line scanner. Once the 3-D model is complete, the Haida Nation will hold on to the files for safekeeping and to teach younger carvers. “The study of this piece provides invaluable insights into the innovation and thought process of our ancestors,” says Guujaaw, a Haida hereditary chief and carver. The fact that Haida members can do this without having to travel extensively “is the magic of technology.”

Although the Haida only worked with NMNH on a digital model of the hat, other groups have also tasked Smithsonian staff with producing physical reproductions, such as that of the pewter pipe. The NMNH crew has created physical copies of rattles, musical instruments, ceremonial staffs and spear throwers with a variety of materials, including nylon and glass powder, silica, gypsum powder and, in one prominent case, wood with other natural materials attached.

In 2012 a cultural specialist from the Central Council of the Tlingit and Haida Indian Tribes of Alaska recognized a severely damaged clan crest hat in the form of a sculpin fish on NMNH’s shelves. The sculpin hat, or Wéix’ s’áaxw in Tlingit, had been at the museum since the 1880s. It was badly broken and could no longer be used in ceremonies. The Kiks.ádi, the Tlingit clan to which the hat belongs, asked NMNH to re-create the item so it could have a version for ceremonial use. Over the next seven years Hollinger coordinated multiple Smithsonian departments to painstakingly replicate the intricately hand-carved piece, in accordance with Tlingit tradition to the extent possible.

Tlingit clans are joined in pair relationships, and custom dictates that when a clan crest object is made, the work should be done by members of its opposite clan. To maintain this tradition, a delegation from the opposite clan traveled to Washington, D.C., to initiate the laser and CT scanning and photogrammetry of the sculpin hat. Once 3-D modeling was complete, the files were programmed into a computer-controlled milling machine that resembles a cross between a band saw and a lathe. Through a series of passes, smaller and smaller milling bits carved away layers of wood from a single piece of alder brought from Alaska. Slowly and delicately, the new sculpin hat emerged. In accordance with custom, the Smithsonian specialist who operated the machine needed to be a member of the appropriate clan—so that group formally adopted the mill operator, Chris Hollshwander. “We found a way to work together to come to some kind of solution,” says Ray Wilson, Sr., a Tlingit elder and leader of the Kiks.ádi. Even in a replicated form, “I believe that the hat wanted to come back home.”

Smithsonian staff took the finished replica to Alaska in 2019. In an emotional ceremony at a conference of several Alaska Native nations, the replica sculpin hat was dedicated by both of its linked clans and ceremonially imbued with spirit. This is when an object like this “comes alive,” says Edwell John, Jr., clan leader of the Tlingit Dakl’aweidí , who was involved in a separate replication project with the museum. He explains that a replica does not usually embody spirits. But Hollinger says that because the Kiks.ádi clan intended the hat to completely replace the original, its circumstance was unique. It was, to Hollinger’s knowledge, the first time a Native American item replicated using digital technology was officially transformed into a sacred object.

The Tlingit allowed the damaged original sculpin hat to remain at NMNH, though the group had the right to request its return under federal legislation. Repatriation of Native American items from Smithsonian collections is governed by the National Museum of the American Indian Act of 1989. The law was the first at the federal level to mandate the return of eligible Indigenous American objects and human remains. A similar law, the Native American Graves Protection and Repatriation Act, which covers other federal entities and any organization receiving federal funding, was enacted the following year.

“These projects have been some of the most rewarding that I’ve ever worked on,” says Vince Rossi, who heads the 3-D program at the Smithsonian’s DPO and worked on the sculpin hat. “And I’ve had the opportunity to 3-D scan Barack Obama and to document the Apollo 11 command module.”

But creating a 3-D model of a spacecraft for digital publication is significantly different from digitizing culturally sensitive and sometimes secret objects. As with most nascent and quickly evolving technologies, digitization of Indigenous cultural resources raises intense moral and ethical questions. Museums hold millions of Indigenous peoples’ artifacts and human remains, many acquired unethically, if not illegally. Hollinger and John are part of a National Science Foundation–funded working group dedicated to examining ethical issues in 3-D documentation of Indigenous heritage. Hollinger says that tribal officials have initiated all of NMNH’s 3-D replication projects and that the museum is able to honor restrictions that Indigenous groups set on the final products—such as controlling who has access to model files or physical replicas. John previously asked NMNH to scan and replicate a Tlingit killer whale clan hat and allowed the Smithsonian to publish the 3-D model online. But he also asked that the digital files be protected, “because we certainly don’t want anybody taking the [plans] and downloading and making their own clan hat—and selling it on the market, on eBay or whatever,” John says.

With such risks taken into account, Hollinger says, the possibility of future partnerships is encouraging. The Comanche National Museum and Cultural Center has created several 3-D models of items for its Web site independently of NMNH. The center has not worked with Hollinger’s team, but its director Candy Taylor says she sees vast potential for documenting Comanche beading works that are currently in other Smithsonian museums. A digital 3-D catalog of those items, she says, would help artists and elders preserve the art.

Other tribes are using 3-D tech for a broad variety of applications. The Caddo Nation, which is based in what is now Oklahoma but has an ancestral range spanning East Texas, Louisiana and Arkansas, has scanned its own pottery samples so they can be used to help identify future archaeological discoveries. This year a group of Alaska Native organizations partnered to form the Naaxein Teaching Partnership, an institution that has trained high school students to use 3-D imaging for textile documentation. And in the Northeast U.S., the University of Maine’s Hudson Museum is working with students and researchers to replicate another Tlingit clan crest hat before repatriation from the museum’s collection.

“This has all taught me to stop making assumptions about what [Indigenous] communities are and are not open to,” Hollinger says, referring to NMNH’s past hesitance to suggest the replication of cultural items, “and to make sure that the most important thing is we have those conversations to explore what it is that they would like to see done.”

Wilson, the Tlingit elder, says that even though there were a number of setbacks in the seven-year effort to complete the sculpin hat project, “what I liked about [the collaboration] is that it was two entities working together to accomplish something that was good for both sides. That could be a lesson for a lot of people to learn: that you can work things out if you work together.”