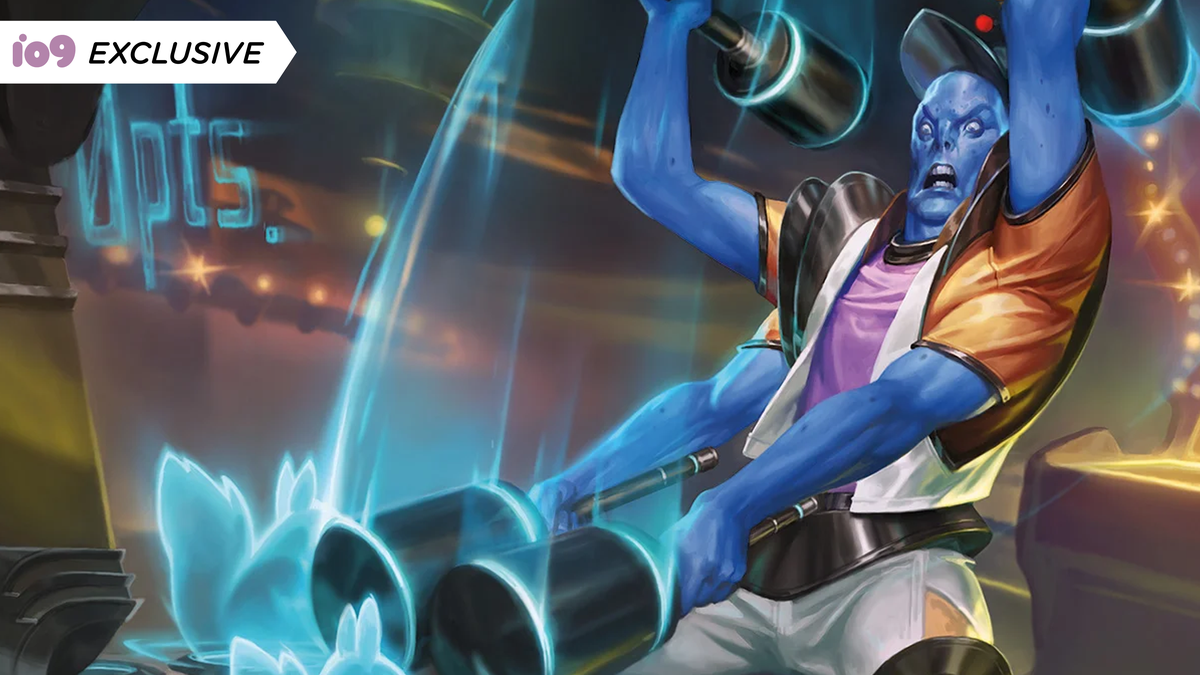 How Magic: The Gathering Crafts Its Zaniest Sets

Magic: The Gathering is arguably weirder than it ever has been, whether it’s in its epic tales of spell-slinging Planeswakers in its primary card sets or its crossovers with everything from Street Fighter and Fortnite to Warhammer 40K and Lord of the Rings. But the series is often at its weirdest not when playing with someone else’s universe, but taking Magic as is and having fun with it.

This is never more clear than in what is known among players and Wizards of the Coast as the “Un-sets.” First starting with Unglued in 1998, there have been five of these casual sets across the card game’s history, cards that take a break from both the competitive and narrative seriousness of Magic and amp up the goofiness, mechanically and in flavor, to game-breaking levels of fun. Now the latest, Unfinity, is about to release, giving players a mystical carnival-themed round of cards to play with that are packed with fun art, goofy flavor text, and some extremely silly rules.

io9 has got your first look at five of the new cards in Unfinity, and their alternative art, but to learn more about the history of designing “Un-sets” and what to expect in the new release, we chatted with Magic: The Gathering head designer Mark Rosewater and Wizards of the Coast senior copywriter Ari Zirulnik over email. Check out our interviews with both below, and then click through to see the new cards, and some of their variant art!

James Whitbrook, io9: Tell me a little bit about how the core idea behind Unfinity first came about.

Mark Rosewater: When making an Un-set, I like to take some technique we use on normal sets and apply it to Un-sets. The idea behind Unfinity was let’s make a top-down set, that is a set where we make the mechanics match the flavor of some big idea. Innistrad was gothic horror, Throne of Eldraine was fairy tales. Theros was Greek mythology. What was a fun top-down idea that we might not do in a normal set? I went to my art director, Dawn Murin, and asked her to think of ideas. When we got back together, she said she wanted to do retro science fiction. I wanted to do a circus/carnival/amusement park. We looked at each other and said, “Let’s do both.”

io9: The theme this time around gives the set a carnival flair. How did you approach bringing some of that flavor to Unfinity mechanically?

Rosewater: We started by making a list of every element of a circus, carnival, and/or amusement park we could. The two main mechanics of the set are attractions and stickers. Attractions ended up being all the things you can do at the space carnival, and the stickers ended up being all the stuff you could get while you’re there. We then made a lot of individual cards that represented all the aspect from who would work or visit there to objects you would see to things that would happen.

io9: What were the game ideas you were most excited to explore in the set?

Rosewater: Minigames are when you stop the main game to play a very short, usually less than a minute, game that will then impact the larger game. The theme of games at a carnival played really well with this idea.

io9: Were there any mechanical ideas you had for the set that didn’t make it in, or were too far even for the Un-set’s noted bending of Magic’s design?

Rosewater: There’s always ideas left on the table, but I was really happy how much of the list we made when we started about things we wanted to be in the set ended up in the set. I did get a bunch of ideas though for future areas of design space to explore in other Un-sets.

io9: What do you think it is about these non-legal sets that have seen Magic players embrace them?

Rosewater: Un-sets are all about embracing the fun, casual side of the game. Yes, it’s great that you can compete in serious tournament competition, but it’s also great you can hang around with your friends and laugh and create game moments that will be stories for the rest of your life.

io9: Where do you see Magic’s un-sets going from here? Do you already have ideas for what you’d want to do next?

Rosewater: I already have the idea for the next Un-set figured out. Un-sets are just a way for us to explore the future of Magic, and the game is so robust, there’s lots of places to look to find the next cool thing.

James Whitbrook, io9: Tell me a bit about the process of writing copy at Wizards. How does your team handle the arrival of new sets like this?

Zirulnik: The typical creative text process starts after art and rules text are finished. We round up a team of talented contract writers and aim to tackle about 30-40 cards a week. Each writer submits multiple names and flavor text options for each card, and the best of the best make it to print.

io9: Do you approach a set like Unfinity differently as you would story on regular Magic sets?

Ari Zirulnik: Unfinity kept the same structure as a typical set, but we had some fun with the process. The first big difference was, uh, me. I’m not typically a creative text lead. While I do write the creative text for Secret Lair, Unfinity was my first time leading a team of writers. And what a team! I asked my boss if I could hire some “names” and I got permission to bring in some very funny folks from all corners of the internet.

The first writer on my list was pretty personal—the extremely funny/good at karate Seanbaby. His articles in EGM were highly formative to my own awful sense of humor, so working with him was kind of a dream come true. We poured some more comedy gas on this hilarious fire by hiring three heavy-hitters from Loading Ready Run: Kathleen De Vere, Cameron Lauder, and Graham Stark. This triumvirate of tee-hees were responsible for some of the most memorable lines in the set. We rounded out the team with Austin Bridges, one of our funniest go-to creative text writers (since hired full-time), Mark Rosewater (the man who puts the “un” in “pun”), and myself. I’d be remiss to leave out the World’s Tallest Editor, Matt Tabak, who was instrumental in searing all of the comedy fat into the delicious steak that is Unfinity. Metaphor!

The rest was mostly business as usual. There was a lot of collaborative back-and-forth between all these hilarious hires, and I could not be happier with how the set turned out.

io9: What’s the biggest challenges in crafting story and copy for an Un-set?

Zirulnik: As I previously mentioned, creative text starts after art and rules text are done. Sometimes this makes coming up with the right joke super hard—it’s sort of like trying super-duper hard to win 250 New Yorker caption contests. On the other hand, our writing team was so unfairly hilarious that picking a winner was sometimes very difficult. The duality of Un-set, ya know?

io9: Magic has always had a wry sense of humor, but the Un-sets are opportunities for it to get really zany. What’s it like stretching the comedy Magic can play with in your work on Unfinity?

Zirulnik: It was really important to me to include a wide variety of humor in Unfinity, especially the kinds of jokes you just can’t do on a normal Magic card. The flavor text on the card “Hat Trick,” for example, is a type of internet anti-humor that we could never do in a typical set. Being able to iterate a bunch of jokes across the different attraction printings was a real treat. I’d also say the ppc (puns per card) is higher than average.

io9: Worldbuilding and story has become steadily more important to Magic in recent years. Are there any lessons you take from writing for a set like Unfinity that you think apply to where Magic’s story progression is going in its regular set releases?

Zirulnik: Not really, unfortunately. Unfinity has a world but it doesn’t really have a story. I can say I’ve been personally inspired to take more risks on Secret Lair flavor text (see: Vengevine). I’d certainly run the next Un-set to learn some more lessons, though!

It Came From Planet Glurg

It Came From Planet Glurg Art

Want more io9 news? Check out when to expect the latest Marvel and Star Wars releases, what’s next for the DC Universe on film and TV, and everything you need to know about House of the Dragon and Lord of the Rings: The Rings of Power.