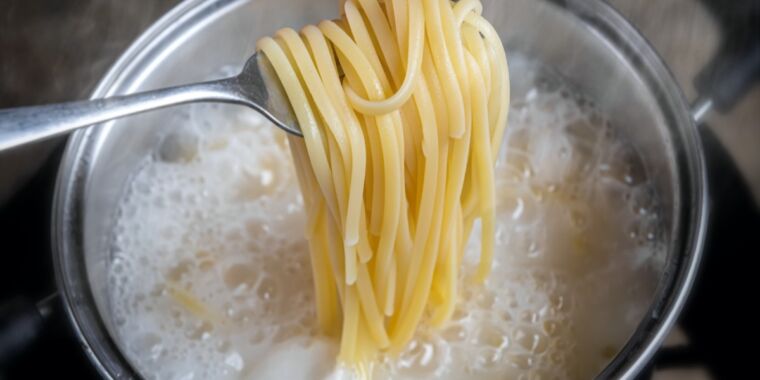 Scientists found themselves working from home along with most everyone else when universities shut down in the face of the COVID-19 pandemic—including laboratories, posing a unique challenge for experimentalists in particular. That’s how physicists from the University of Illinois at Urbana-Champaign (UIUC) found themselves casting about for experiments that could be done at home in the kitchen. The physicists ended up investigating the physics of cooking pasta—first conducting home experiments, then repeating those in the lab once the university reopened.

Cooking instructions on most packaged dried pastas typically recommend an 8 to 10 minute cooking time, but it’s an imprecise method that can result in a great deal of variation in the resulting consistency of the cooked pasta. Among other findings, the UIUC physicists came up with a simple technique, using just a ruler, to determine when one’s spaghetti is perfectly al dente, with no need for the time-honored tradition of throwing a cooked strand against the wall. A paper on their findings has just been accepted for publication in the journal Physics of Fluids, and two of the authors presented the work at this week’s meeting of the American Physical Society in Chicago.

There have been a surprisingly large number of scientific papers seeking to understand the various properties of spaghetti, both cooking and eating it—the mechanics of slurping the pasta into one’s mouth, for instance, or spitting it out (aka, the “reverse spaghetti problem”). The most well-known is the question of how to get dry spaghetti strands to break neatly in two, rather than three or more scattered pieces.

French physicists successfully explained the dynamics in an Ig Nobel Prize-winning 2006 paper. They found that, counterintuitively, a dry spaghetti strand produces a “kick back” traveling wave as it breaks. This wave temporarily increases the curvature in other sections, leading to many more breaks.

In 2018, Ars reported on work by two MIT mathematicians who figured out a useful trick: twist the spaghetti at 270 degrees before slowly bringing the two ends together to snap the spaghetti in two. The twist weakens the snap-back effect, and as the strand twists back and unwinds to its original straightness, it will release pent-up energy in the strand so there aren’t any additional breaks.

Back in 2020, physicists at the University of California, Berkeley, provided a thorough explanation for why a strand of spaghetti in a pot of boiling water will start to sag as it softens. Then it sinks slowly to the bottom of the pot, where it will curl back on itself to form a U shape.

As we reported at the time, spaghetti, like most pasta, is made of semolina flour, which is mixed with water to form a paste and then extruded to create a desired shape (in this case, a thin, straight rod). The commercial products are then dried—another active area of research, since it’s easy for the strands to crack during the process.

So what happens to the dried spaghetti when it is submerged in boiling water? Only a few seconds are needed for the strands to reach the same temperature as the water, but it takes a bit longer for water to work its way through the starch matrix of the pasta. As this happens, the spaghetti swells, and small amounts of a starch called amylose leach into the water. Finally, starch gelatinization occurs, a chemical process that governs textural changes, so one’s well-prepared spaghetti is al dente.

UIUC’s Sameh Tawfick, the senior researcher on this latest work, naturally read the 2020 paper with great interest, given how closely it relates to his own lab’s study. However, he pointed out that his team focused more on the surface adhesion and coalescence of pasta strands, in addition to coming up with a simple ruler measurement to determine when one’s pasta is perfectly cooked.

Pasta proved a perfect fit for at-home experiments during the time of COVID, since Tawfick’s lab investigates soft materials, especially long fibers. Think yarns, monofilaments, muscles, artificial muscles, and the like. “Pasta is a long fiber, from our perspective,” Tawfick said during a press conference at the meeting. “We study deformation, entanglement, adhesion, and all these things are present in pasta.”

Adhesion was the primary focus for the at-home experiments—specifically, how strands of spaghetti move laterally and stick together when one pulls cooked pasta up off the plate. Tawfick likens the phenomenon to the so-called “Cheerio effect,” in which those last few tasty little “O”s clump together in the bowl: either drifting to the center, or to the outer edges.

The culprit is a combination of buoyancy, surface tension, and the so-called “meniscus effect,” which adds up to a type of capillary action. The mass of the Cheerios is insufficient to break the milk’s surface tension. But it’s enough to put a tiny dent in the surface of the milk in the bowl, such that if two Cheerios are sufficiently close, they will naturally drift toward each other. The “dents” merge and the “O”s clump together.

“If you have any particles floating on the surface of a liquid that are partially submerged, so part of the structure is in the liquid and part of the structure is outside the liquid, you’ll always have attraction if the particles are of the same kind,” said Tawfick. Similarly, “If you have pasta of the same kind, it will always coalesce.” This would not occur if some of the pasta noodles were hydrophilic and some were hydrophobic; then there would be repulsion between them. “Instead of the surface tension bringing the pasta noodles together, the surface tension will cause the two different kinds of pasta to repel one another,” he said.

For their lab experiments, Tawfick and his team 3D-printed a small device to vertically hold individual strands of dry spaghetti, with very precise, reproducible spacing. A glass beaker was filled with water and heated over a hotplate. A stirrer with a thermal probe tracked the temperature. The beaker was mounted on a platform with a linear motor allowing it to move up and down, dipping the pasta in and out of the water as a fixed camera recorded the experiments. They used a ruler to measure both the lengths of the individual strands and the distances between them. They also measured the swelling (strain) and stiffening (modulus) of the noodles as they were cooked in both distilled and salted water, at both 80° C and 100° C.

One of the most surprising findings was that the pasta noodles increased in length the longer they were cooked. The team found that, as the pasta is cooked and it becomes more swollen and softened, the noodles are more easily deformed by the capillary action. After 30 minutes, a noodle would swell up to 70 percent of its original size, and would soften by as much as 100,000 times. (And yes, Tawfick acknowledged that nobody would actually want to cook pasta that long.)

The stiction distance (stick length)—”the distance after which two noodles stick together if you dip them in the liquid, in and out,” per Tawfick—was inversely proportional, decreasing in length with a longer cooking time. That turned out to be the most useful measure for inferring how well the pasta had been cooked. ”If you hang the strands of pasta and measure the stick length with a ruler, you can adjust the pasta’s texture to exactly what you want every time,” said Tawfick. “If you like your al dente pasta to be on the harder side, you want a 30 millimeter stick length. If you like it to be on the softer side, this corresponds to approximately 18 millimeters.”

Adding salt to the water does indeed improve pasta texture, as many cookbooks advise. But what about adding oil to the boiling water prior to cooking, as some chefs recommend? The team tried adding oil in their experiments, and that did affect the strands of pasta, but according to Tawfick, the results were too complex to really determine what was happening.

“We don’t know whether this is a chemical or a physical effect,” he said. “Is the oil somehow diffusing into the pasta and changing its intrinsic properties, or is it just a physical effect where the oil sticks on the external surface and hence changes the adhesion between two strands of pasta? More experiments are needed to understand this complex phenomenon.”

Other future experiments might involve applying their method to different pasta shapes like rigatoni, which involves both bending and twisting rather than merely bending. This makes it a more mathematically intricate problem, according to Tawfick.

There’s also the question of reversibility: can we one day engineer pasta that can be cooked, dried out, and then re-cooked while maintaining the same taste and texture? In fact, co-author Jonghyun Hwang, a UIUC undergraduate, actually tested this possibility at home, with disastrous results. The resulting spaghetti “was even weaker than when I cooked pasta just once,” Hwang said.

Tawfick chalks this up to the chemical reaction that takes place during cooking, even though the aspects of the cooking process they studied are purely physical, involving the interactions between the polymers inside the pasta with the water. “One thing that we learned is that the molecular structure—the morphology or topology of the networks of polymers—changes irreversibly using the swelling process,” he said.