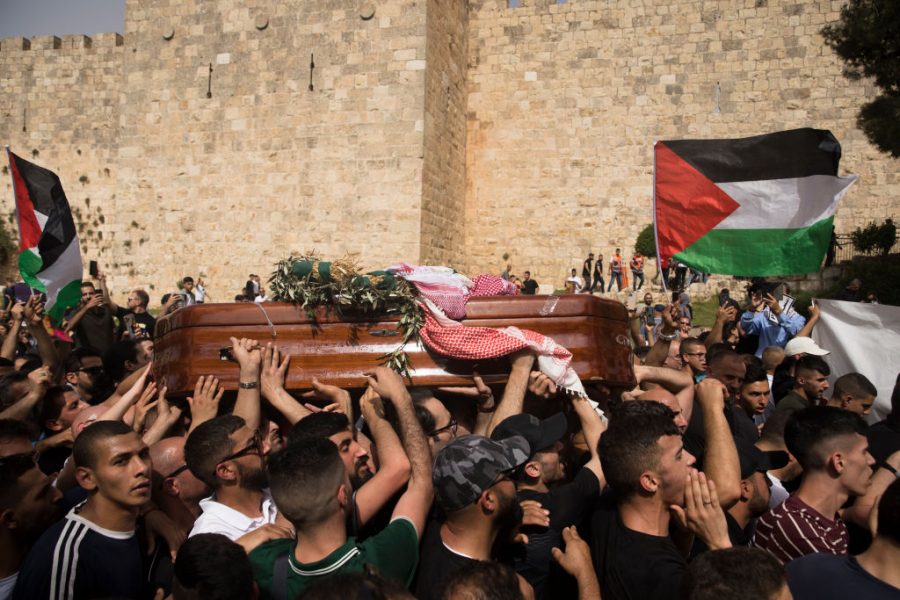 The Israeli military’s killing of journalist Shireen Abu Akleh is simply a more flagrant display of commonplace Israeli assaults on Palestinians. The only way to truly end the impunity is to cut off US funding.

The world, including the United States, has rightfully been in an uproar over the callous killing of the Palestinian American fifty-one-year-old veteran journalist Shireen Abu Akleh by the Israeli military. The Al Jazeera journalist was shot while covering an Israeli military raid in the Jenin refugee camp in the West Bank. As her death hit the media, the Biden administration, as well as members of Congress all the way up to House Speaker Nancy Pelosi, expressed condolences, called for a swift and thorough investigation, and said, “Those responsible must be held accountable.”

Does this mean that Abu Akleh’s killing won’t be pushed under the rug like so many other killings of Palestinians, even Palestinian Americans? Don’t get your hopes up.

Upon Abu Akleh’s death, Israel’s propaganda machine quickly kicked into overdrive. First they claimed it was Palestinian gunfire that had killed Abu Akleh and wounded her colleague Ali al-Samoudi. But by the end of the day, Israeli defense minister Benny Gantz conceded that the bullets could have been from Israeli soldiers. “We are not certain how she was killed, but we want to get to the bottom of this incident and to uncover the truth as much as we can,” Gantz told reporters.

By Friday, two days after Abu Akleh’s death, and despite video evidence showing that there were no Palestinian shooters in the vicinity, the Israeli military offered two scenerios for how she might have been killed: either she was hit by armed Palestinians firing “dozens of bullets indiscriminately” toward Israeli military vehicles or she was mistakenly killed by an Israeli soldier using a gun with telescopic sight through a slit in an the armored vehicle, intending to hit a Palestinian gunman.

Israel then offered to conduct a joint Israeli–Palestinian Authority investigation, which was rejected by the Palestinians because of their deep distrust of Israeli authorities, the enormous power imbalance, and the abysmal Israeli record when it comes to investigating itself. Instead, they are calling for an international investigation.

According to the Israeli human rights organization Yesh Din, about 80 percent of complaints filed against soldiers for harming Palestinians are closed without a criminal investigation. Of the few investigations that are undertaken, only 3.2 percent result in the indictment and prosecution. Palestinian and Israeli civil society organizations have documented the deaths of 155 Palestinian children from live ammunition or crowd-control weapons since 2013, but only three indictments on criminal charges have been issued against Israeli soldiers for those killings.

There is more of an outcry when journalists are attacked, but even then, Israel acts with impunity. According to the Palestinian Journalists Syndicate, there are hundreds of Israeli attacks on journalists every year.

Some have said that Abu Akleh’s case is different. She wasn’t only a journalist for a well-respected news outlet; she was also an American citizen. But Abu Akleh is far from the only Palestinian American to be killed by Israeli soldiers.

Sixteen-year-old Palestinian American Mahmoud Shaalan was shot and killed in October 2016 at a checkpoint near the Beit El settlement. Responding to an Israeli soldier’s instructions to stop and turn back, he had attempted to lift up his shirt and hands to show he was not a danger when he was gunned down. Upon requests by his family for an investigation, the Israeli military informed the US State Department that there had been no criminal wrongdoing by the soldiers involved.

On January 12 of this year, seventy-eight-year-old Palestinian American and Milwaukee grocery store owner Omar Assad died from a fatal heart attack while being detained, bound, gagged, and left of the ground, his face blue from lack of oxygen. Following a call for investigation by Assad’s family and some members of Congress, and the Biden administration asking for “clarification,” Israel responded that the incident had resulted from “Assad refusing to cooperate with troops operating in the area” and that it was “a grave and unfortunate event” due to “poor decision-making on the part of the soldiers.” Two officers were dismissed and a battalion commander was reprimanded, but no one went to jail.

After US peace activist Rachel Corrie was crushed to death by an Israeli bulldozer in Gaza in 2003, the Israeli military’s investigation, done at the request of the Bush administration, concluded that her death was a “tragic accident.” In a civil suit brought by Corrie’s parents, the court found no fault in the military’s investigation and ruled that the state of Israel was not responsible for Corrie’s death.

The Israeli military’s knowledge of its impunity has been on full display since the killing of Shireen Abu Akleh. The day after the journalist was killed, they raided her family’s home and forcibly removed the Palestinian flag flying outside. While the family was accepting condolences, Abu Akleh’s brother, Anton Abu Akleh, was summoned to the police station and warned that the funeral proceedings would be dispersed if there was an “escalation.” In perhaps the grossest display of impunity, the day that Abu Akleh was laid to rest, Israeli forces attacked the funeral march, firing stun grenades and hitting pallbearers with batons, almost causing them to drop her coffin.

With all the media attention, it’s possible that this time Israel will feel obligated to charge Abu Akleh’s killer, and the individual soldier might even receive a sentence. But even if that does occur, it won’t affect the essence of Israel’s systematic, daily violence against Palestinians unless more substantial measures are taken by the international community, particularly the United States.

After Abu Akleh’s murder, US congresswoman Ilhan Omar tweeted, “We provide Israel with $3.8 billion in military aid annually with no restrictions. What will it take for accountability for these human rights violations?” Palestinian American congresswoman Rashida Tlaib tweeted, “Shireen Abu Akleh was murdered by a government that receives unconditional funding from our country with zero accountability.” The only way to really influence Israeli behavior is to cut the funding. Only when the United States decides to end its complicity in Israel’s crimes will there be a real possibility of justice for Abu Akleh and the rest of the Palestinian people.