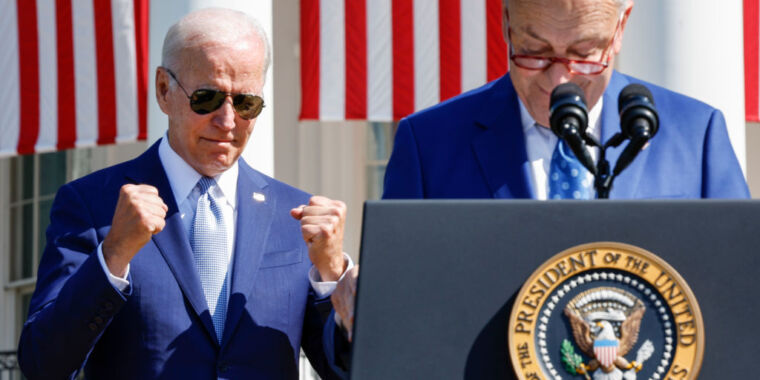 It’s official: US chipmakers will receive billions in grants and tax breaks

Chipmakers eager to receive huge subsidies stood with President Joe Biden as he signed a bill injecting $52.7 billion into their industry today. Executives from companies like Micron, Intel, HP, and Lockheed Martin witnessed the flick of Biden’s pen, alongside auto industry leaders and other stakeholders. They are hopeful that these new subsidies will end “a persistent shortage” in memory chips that Reuters reports has affected “everything from cars, weapons, washing machines, and video games.”

In total, the CHIPS and Science Act—also known as the Creating Helpful Incentives to Produce Semiconductors for America Act—authorizes up to $200 billion in subsidies over 10 years, should the US decide to continue investing. The long-term vision is to shove the US ahead of China and other invested countries in a global race to become a chip industry leader.

Once the law is enacted, the Department of Commerce will decide on rules for how grants will be disbursed, dictating who gets how much money and for how long. Because advanced semiconductor production that’s necessary for chipmaking requires a significant investment of time and money, venture capitalists have been less likely to fund long-term projects. This law positions the federal government to fill that funding gap while advancing highly coveted technology domestically.

Some chipmakers have already announced long-term investments ahead of Biden signing the bill into law, including a commitment from Qualcomm to purchase $7.4 billion worth of semiconductor chips over the next six years from a New York factory. Micron committed even more, setting aside $40 billion to fund memory chip manufacturing. Micron’s investment alone would “boost US market share from 2 percent to 10 percent”—an ample recovery that’s still relatively modest when compared to the 38 percent market share that the US used to enjoy in 1990.

In addition to federal grants, chip manufacturers are eligible for a 25 percent investment tax credit through the bill. For the entire industry, that’s another estimated $24 billion boon, on top of the $50 billion in grants.

Historically, US lawmakers consider corporate subsidies of such proportion to be counterintuitive to ensuring a fair, free market. But lawmakers seem to think it’s necessary to ward off national security risks and address global supply chain concerns by investing billions into America’s chip production—much like how the European Union and China have invested in their own production.

This could help put the US ahead as a top global chip manufacturer, but there are some signs that the US will need to monitor progress closely to ensure maximum profitability on its investment. Biden’s move today comes just after China’s chipmaking industry has “descended into chaos,” with top Chinese chip industry officials arrested on corruption charges for misusing government money. After investing $30 billion, China is still on the hook for another $20 billion as investigations begin, and their technology still lags behind Taiwan’s.

Experts have said there’s nothing surprising about discovering corruption in an industry with so much money “sloshing around.” In the US, corruption from increasing corporate welfare has been heavily criticized since the 1980s, when watchdogs first attempted to “drain the swamp” of politically motivated and financially controlling corporations working against consumer interests for profits. China is one example of how government investment in the chip industry can go wrong—wasted money on low-quality technology that can’t compete in global trade—but it also illustrates why cutting ties with foreign suppliers is considered crucial, even by more frugal lawmakers who otherwise would hesitate to approve large corporate subsidies.