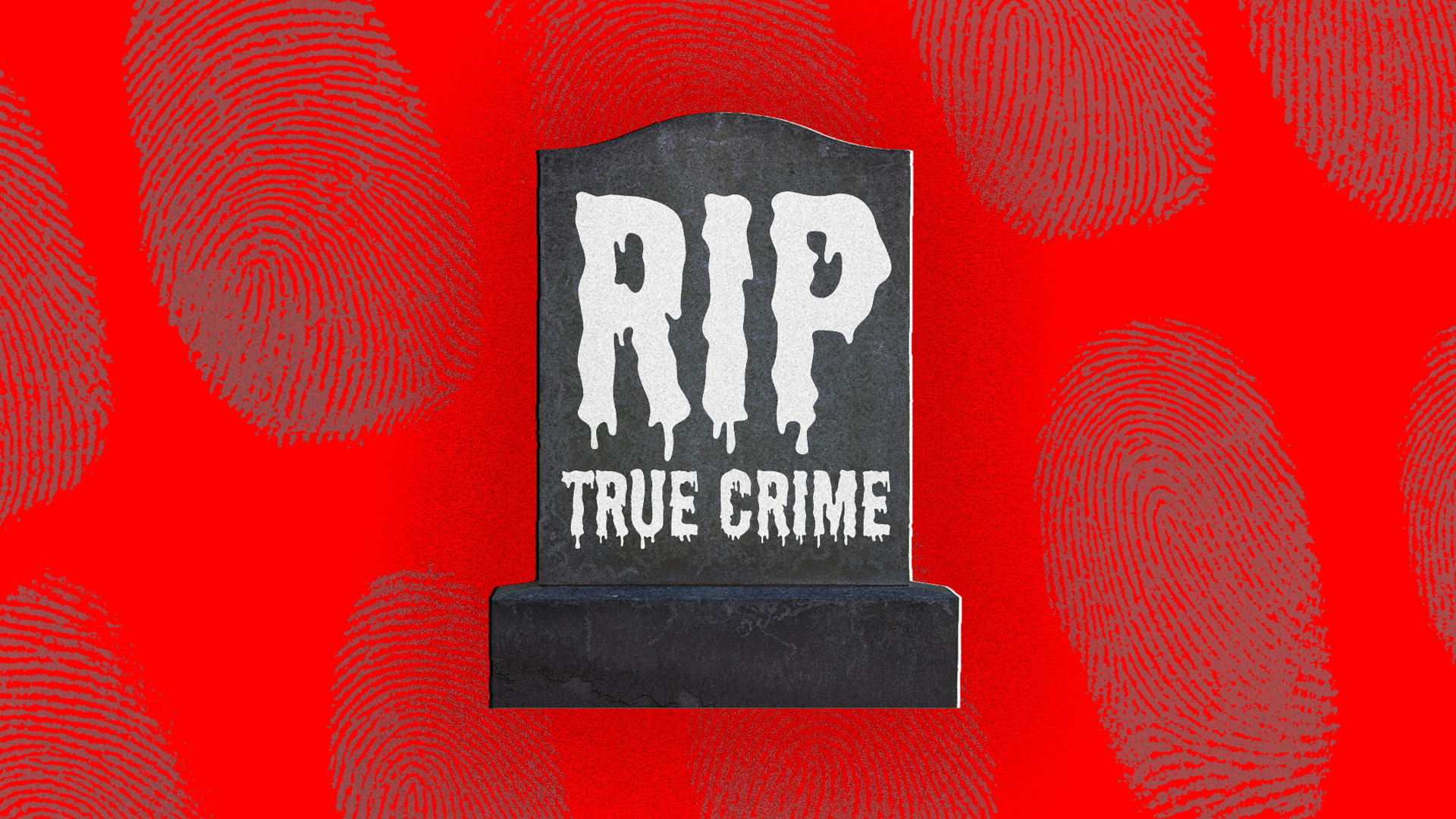 It’s kind of embarrassing, but I’m a true crime fan. I don’t like violence, I don’t think it’s cool, and I don’t want it to happen more often so I have more TV to watch—but I do think it’s interesting to unpack and try to understand. True crime, at its best, documents real atrocities through first-person accounts and archival footage, ideally backed up by deep research. Fictionalized depictions are borderline. They might technically fall under the umbrella of true crime, but I find them much less interesting.

Publicly loving true crime feels a little bit like eating McDonald’s at work or putting on Tame Impala at a party—nobody’s going to say anything, but I know what they’re thinking. That’s because, lately, the stewards of true crime have been humiliating me by doing too much, overstepping, and not holding themselves to the standard other people in other genres that take a stab at “real life” do. That became crystal clear recently when two different pop culture moments collided to pull true crime back into the national spotlight, where the genre squirmed under scrutiny.

In late September, Adnan Syed—who was convicted in 1999 of first-degree murder, robbery, kidnapping, and false imprisonment in the killing of his ex-girlfriend Hae Min Lee—was released from prison after a judge vacated his sentence. This week, his charges were dropped, and he was exonerated as a result of DNA evidence. Syed, who maintained his innocence throughout his 23 years of incarceration, was the subject of the mega-hit true crime podcast Serial’s first season in 2014—which is why his release made national news.

Publicly loving true crime feels a little bit like eating McDonald’s at work or putting on Tame Impala at a party—nobody’s going to say anything, but I know what they’re thinking.

Reporter and host Sarah Koenig had spoken with him extensively, interviewed people familiar with him and Lee, and unpacked the shaky evidence used to convict him, raising public concerns as to whether or not he received a fair trial and whether he was wrongfully convicted. The season’s episodes were reportedly downloaded around 68 million times, and it was critically lauded as a feat of investigative journalism. Still, Serial’s existence seems to needle Lee’s family, years later. “This is not a podcast for me,” Young Lee, Hae Min’s brother, said in a Zoom court hearing in September, according to the New York Times. “This is real life—a never-ending nightmare for 20-plus years.”

Just two days after Syed was released from prison, Netflix released a new mini-series about real-life serial killer Jeffrey Dahmer. It shot to the top of Netflix’s most-watched TV shows (where it remains as of this writing) and is reportedly second only to Stranger Things 4 in all-time popularity for English-language programming. Still, critics have panned it as unnecessary and one victim’s family members called the show “retraumatizing,” “harsh,” and “careless.”

These events coupled feel like the end of an era in “highbrow” true crime—one that started with Serial and morphed into a media environment where you could pop a microphone in front of any two ModCloth-wearing white women who “love murder” and create a hit podcast. In the wake of this transformation, the same questions that have long plagued the genre remain: Is true crime inherently immoral and exploitative? Is it a vehicle for justice in a broken legal system? As an ardent, if sheepish, fan, I propose a third question: Can true crime auteurs pick a lane between advocacy and exploitation?

True crime wasn’t invented in the 2010s. The genre—and, by extension, audiences’ appetite for reading about gruesome crimes in lurid detail—has existed for almost as long as the printing press. In her 2019 piece titled “True Crime and the Trash Balance,” Soraya Roberts wrote about the shifting perception of the genre in mainstream pop culture. In the 16th and 17th centuries, crime reports with an explicit Christian tilt were written to connect the dots between sin and punishment for household crimes: child or servant abuse, spousal murder, etcetera. By the 1800s, true crime “penny dreadfuls” detailing the exploits of murderers run amok became a source of easily digestible amusement that picked up a reputation as “insensitive to and financially exploiting both criminals and their victims,” as Roberts put it.

In the mid-1900s, though, a facelift from Truman Capote’s In Cold Blood, hailed as the first-ever work of literary non-fiction, finally made the genre viable terrain for high-minded writers and filmmakers—who produced other standouts like Errol Morris’s 1988 documentary The Thin Blue Line, which generated publicity that led to its subject Randall Dale Adams’ release from a Texas state prison. (Later, Adams would successfully sue Morris over the rights to his life’s story.)

That highbrow style only lasted so long. From the late 80s onward, true crime once again slipped into the realm of “low culture,” thanks to the advent of daytime television. Talk shows pumped out obsessive, tabloid coverage of big-ticket crimes, like the O.J. Simpson trial, the BTK Killer’s unmasking, and the murder of JonBenét Ramsey. The explosion of made-for-TV movies sensationalized crimes like teen Amy Fisher’s shooting of her statutory rapist’s wife or the Menendez brothers murdering their allegedly abusive parents. The introduction of COPS and America’s Most Wanted stoked white America’s fears about Black crime and fed the desire to see “criminals” get punished. Once again, true crime was trash.

Serial stood out because it marked such a dramatic tonal shift: The podcast’s blockbuster first season was a measured work of investigative journalism, aimed at righting Syed’s potentially wrongful conviction. The murder of Hae Min Lee wasn’t luridly described, and it wasn’t the show’s point—the systemic failure that landed Syed in prison was. People who listened in learned about the unreliability of eyewitness testimony, the malleability of memory, and the importance of competent legal representation—one of the podcast’s big reveals was that Syed’s lawyer was disbarred a year after she represented him.

In “True Crime and the Trash Balance,” Roberts noted that the belief Serial had serious educational value was shared by the podcast’s creator: “Koenig bristled at the suggestion that this was entertainment,” she wrote, referencing an interview with the host published in the New York Times Magazine. “‘I don’t think that’s fair,’ [Koenig] said. ‘I’m still reporting.’ As though the two were mutually exclusive. As though true crime could only be trash if it were entertainment, and could only be entertainment if it weren’t journalism.”

Serial paved the way for advocacy-oriented true crime. The TV series Making a Murderer, about an ostracized family and the questionable conviction of two of its members, and podcast In the Dark, whose second season focused on a man named Curtis Flowers who was tried for the same crime an astonishing six times, were both successes in the investigative, advocacy mode. These were shows you didn’t have to be embarrassed about consuming, thanks to their high production value and incisive, warranted critiques of our broken criminal justice system. In a country where studies predict that between 4 to 6 percent of America’s prison population—that’s almost 100,000 people—have been wrongfully convicted, this kind of attention is undeniably a good thing.

On the heels of that production value came prestige true crime, less overtly schlocky than its forebears. I wouldn’t argue limited series HBO’s I Love You, Now Die, about charges that teenager Michelle Carter drove her boyfriend to commit suicide, or The Jinx, about murderous millionaire Robert Durst, produced a lot of societal good. They did, however, include buy-in from the actual people impacted by these crimes—and they were entertaining as fuck.

At the same time, though, the genre’s advocacy tilt spawned yet another offshoot that harkens back to the fearmongering of the 80s and 90s. Practiced by popular podcasts like Crime Junkie and My Favorite Murder, wherein the act of creating crime-centric content became morally righteous on its own merit. Accurately portraying violent crimes becomes an act of memorializing victims, as does warning potential new victims—aka, listeners and viewers—about life’s myriad dangers. Writer Emma Berquist called out this “true crime brain rot” mentality in an essay for Gawker, pointing to the sex trafficking panic and last year’s TikTok frenzy around Gabby Petito’s murder as natural consequences. True crime as victims’ rights work and precautionary tale rolled into one makes the world seem much more dangerous than it actually is, just like COPS, and tabloids, and Fox News do. Fear is the point.

DAHMER – Monster: The Jeffrey Dahmer Story (in case you didn’t get it the first time), isn’t quite this kind of cautionary story, but it positions itself as sharing the same victim-oriented focus. The show is granularly accurate in its portrayal of Dahmer’s world-famous crimes—particularly the fact that most of Dahmer’s victims were non-white queer men at the height of the AIDS crisis, whom he targeted because he correctly assumed this victim profile would attract minimal police attention.

True crime as victims’ rights work and precautionary tale rolled into one makes the world seem much more dangerous than it actually is, just like COPS, and tabloids, and Fox News do. Fear is the point.

But in a turning point for the genre itself, some of the people who actually knew and loved Dahmer’s victims refuse to accept the premise that depicting their deceased loved ones is equivalent to honoring them. Rita Isbell, the sister of Dahmer victim Errol Lindsey, and whose victim impact statement was depicted in Dahmer beat by beat, expressed bitter disappointment that co-creators Ryan Murphy and Ian Brennan did not reach out to her before reproducing her pain and fury on screen. “If I didn’t know any better, I would’ve thought it was me,” Rita Isbell told Insider. “Her hair was like mine, she had on the same clothes. That’s why it felt like reliving it all over again. It brought back all the emotions I was feeling back then.” The lack of effort to involve her or seemingly any other victims’ family members reveals a vacuousness to the attempt at “finally” telling the Jeffrey Dahmer story through the lens of the community his crimes impacted—a fundamental confusion of accuracy for advocacy. In fact, that painstaking accuracy makes the creators’ snub of Isbell even harsher. I, for one, don’t want to consume anything that so overtly magnifies someone’s pain.

As long as production companies labor under the delusion that there’s real social utility to a mass-market retelling of sensationalized crimes, done the “right way,” we’ll continue to get these stories that are, at best, offensive and, at worst, encourage distrust and stoke fears about the monolith of “crime.” It’s time for a return to form: True crime with a solid base of research that still scratches an itch—something like I’ll Be Gone in the Dark, where late author Michelle McNamara’s all-consuming search for the Golden State Killer adds another lurid layer to an already horrifying true story. Solid gold entertainment. Making the genre bear a greater burden than that doesn’t do anyone any favors.