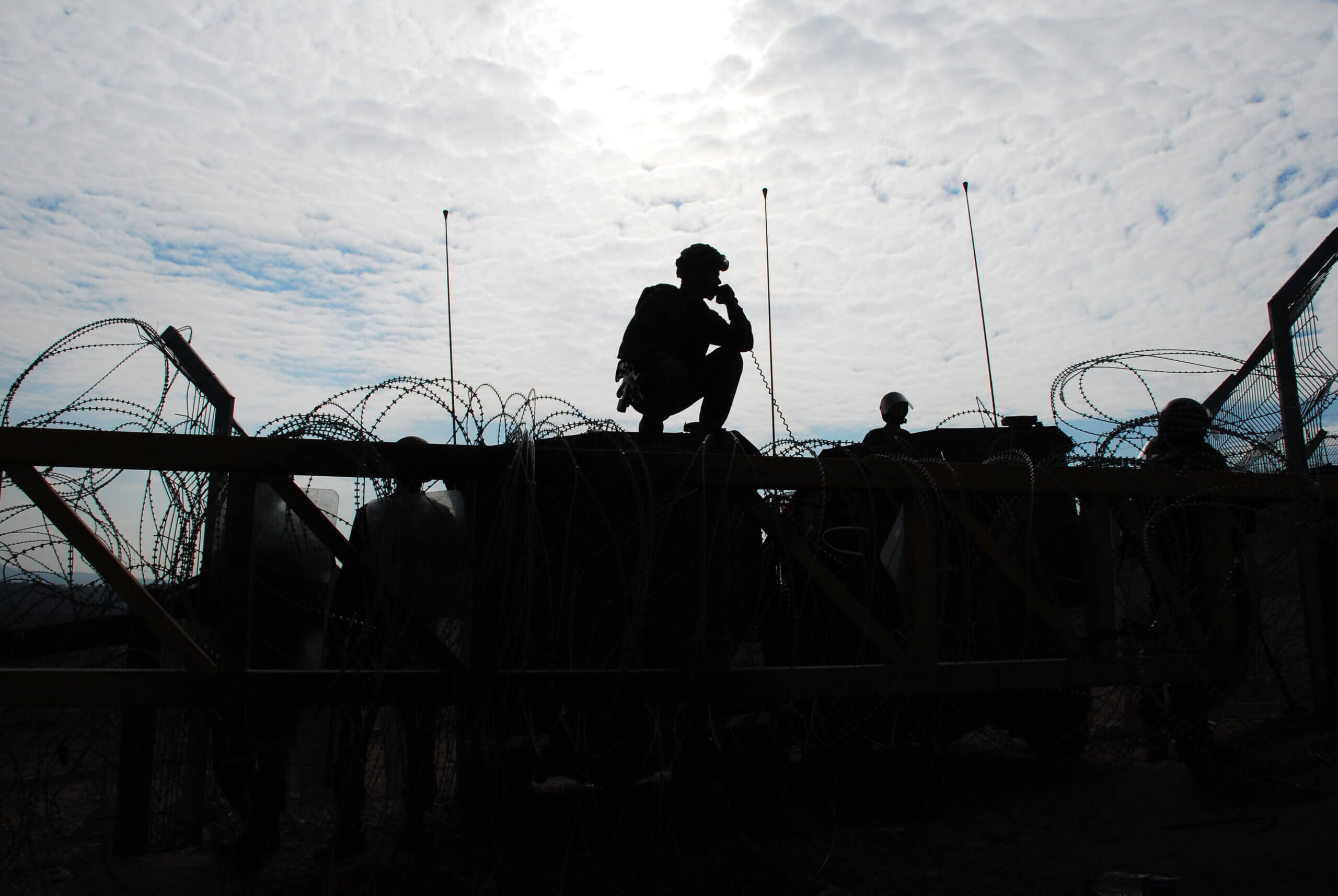 This is an adaptation of Looking Forward, a weekly email from our editor-in-chief sent on Friday afternoons. Sign up here to get the Forward’s free newsletters delivered to your inbox. Download and print our free magazine of stories to savor over Shabbat and Sunday.

It’s hard not to feel hopeless about the prospects for peace in the holy land. It has been that way for a long time. But last week I heard a proposal that was both optimistic and pragmatic — more of both those welcome qualities than anything I’ve encountered since I started covering the region a decade ago.

It’s time we start talking seriously about a Confederation of Israel and Palestine.

Dahlia Scheindlin, who presented the idea in the backyard of an Upper West Side brownstone to a couple dozen leftist Jews desperate to end the occupation, is a respected American-Israeli pollster and political analyst. She acknowledged that confederation — a new way of thinking about sovereign Israeli and Palestinian states akin to the European Union —  “is not going to happen tomorrow” but walked through the many ways it is both more realistic and probably better for all parties than any other option.

“I often hear the feedback that this is a great idea but it’s fantasy, it’s a la la land, it’s wishful thinking; people say, ‘Oh, unicorns and rainbows are nice, too,’” she said. “I think it is an approach that responds to a stark and sometimes harsh reality.”

Let’s start with that reality. Most people who think seriously about the Israeli-Palestinian conflict see the two-state solution as in dire straits or already dead. But the “one-state solution” is no solution at all. A single entity between the Jordan River and the Mediterranean Sea might address the urgent human rights crises but fails to fulfill the national aspirations of Palestinians or Jews. I know virtually no Israeli Jews who would want to live in such a place.

If you, like me, want Israel to remain a secure Jewish and democratic state with international legitimacy, the status quo is not sustainable. If you, like me, care about Palestinians’ fundamental rights to also live safely and freely in a democracy, we cannot throw up our hands even in the face of intransigence and leadership vacuums.

If you, like me, do not want this era to become just another chapter in our 5,000-year story when Jewish sovereignty in the land turns out to be temporary, we need to break the political stalemates and the horrific cycles of violence.

Could confederation be the path forward? And what the heck is it, anyhow?

Scheindlin spent an hour outlining her answer to the second question on a Tuesday evening in the backyard of Sally Gottesman, a longtime Jewish philanthropist and lay leader who is currently chair of Encounter, the group that takes Jews to meet Palestinians in the occupied West Bank. The event was co-hosted by Rabbi Roly Matalon of Congregation B’nai Jeshurun nearby.

Under confederation, Israel and Palestine would be independent, sovereign states with a border roughly along the Green Line. The biggest difference between this idea and the two-state paradigm that has dominated discussion since the 1990s is that the border would be an open border, like the borders within the European Union, and would not cut through Jerusalem, which would be a wholly shared city and, likely, a dual capital.

The two sovereign states would have to negotiate the specifics of how they would operate independently and interdependently. But the fundamental concept of the open border means that Palestinians and Israelis could travel, work, study and live in the other’s territory so long as they were law-abiding and accepted the other’s sovereignty. Like Germans who live in Paris — as legal residents, not citizens.

This would go a long way toward addressing two of the thorniest obstacles to two states: what to do about the millions of Palestinian refugees and their descendants yearning to return to the land of their ancestors, and about the 650,000 Israeli Jews now living in settlements in East Jerusalem and the rest of the West Bank.

Refugees who chose to live in Israel — and Scheindlin imagines some negotiated limit on the number — would vote in Palestinian national elections, not Israeli ones, so their presence would not directly change the power dynamics in Israeli government. Settlers, too, could largely decide to stay where they are — Scheindlin envisions some negotiated land-swaps — so long as they accepted Palestinian authority over things like zoning.

(Arab-Israelis, also known now as Palestinian citizens of Israel, could be dual citizens and vote in both places, not unlike the thousands of Israelis, like Scheindlin herself, who are also citizens of the U.S.)

The two confederated states would have separate parliaments and militaries, though would coordinate on security and international policy — again, think about the European Union. They would create shared authorities for management of resources like water, for addressing challenges that know no borders, like the climate crisis and public health. “We are one epidemiological zone, we learned that during corona,” Scheindlin noted. “We already have one economic zone in practice. There’s only one currency, and the labor forces are completely intertwined.”

You can see a lot more detail in this 20-page booklet from a group called A Land for All — Eretz L’Kulam in Hebrew, Aire Liljamie in Arabic — that was created in 2012 by an Israeli journalist, Meron Rapoport, and Palestinian activist, Awni Al-Mashni. You’ll undoubtedly have a lot of questions, as did the group Scheindlin spoke to in that backyard.

The biggest one is: How could we possibly even get the parties to consider confederation, given Palestinian political chaos (there has not been a national election since 2006), Israeli political instability (four elections in two years), and international disengagement with this conflict (the last U.S.-brokered peace talks broke down in 2014)?

During the briefest glimmer of progress in that last round of Israeli-Palestinian negotiations, led by then-Secretary of State John Kerry, I re-read the clips from when the Oslo Accords were signed in 1993. Tom Friedman had the main byline, and it truly sounded like the beginning of the end of this conflict, a five-year plan toward two sovereign states.

It made me realize that it had never occurred to me, when I became Jerusalem bureau chief of The New York Times in 2012, that a peace agreement might happen on my watch. I also thought I might have been the first person in that job to not consider there was even the slightest possibility that such a historic breakthrough might end up under their byline. That’s how intractable The Situation, as Israelis and Palestinians call it, had become.

And it’s only gotten worse since. Polls show that support for a two-state solution has dropped since 2010 from 71% of Israeli Jews and 57% of Palestinians to around 43-44% for both, with growing majorities on both sides seeing no actual prospects for it coming to fruition. At the same time, about 30% of both Israeli Jews and Palestinians, and 44% of Israeli Arabs, back the concept of confederation, Scheindlin said, though polling on that issue has been much less detailed.

I am, fundamentally, a skeptic, but I was impressed with Scheindlin’s thoughtful and realistic presentation. She grew up in New York — her mother is former federal Judge Shira Scheindlin, who famously ruled in 2014 that the city’s “stop and frisk” police policy was unconstitutional; her father is Raymond Scheindlin, professor emeritus at the Jewish Theological Seminary — and made aliyah in 1997. She has a PhD from Tel Aviv University, worked for former Prime Minister Ehud Barak during the Camp David negotiations in 2000, and has connections to a litany of respected think tanks and publications.

Scheindlin started her presentation by reading a 10-point peace proposal that sounded an awful lot like confederation — and was published by the late Israeli writer Uri Avnery on June 14, 1967, four days after the war ended and the occupation began.

She said she herself started considering confederation a decade ago but spent the first five years researching and thinking about it “until I became an advocate.” In the last five, she’s written numerous articles and had what she called “micro-conversations” with Washington policy wonks, Israeli politicians, college students — and, now, in an Upper West Side backyard, a little group of American Jews who love Israel but hate the occupation.

She acknowledged that even getting confederation into mainstream conversations about the Israeli-Palestinian conflict is, as she put it, “a Sisyphean task.” But that doesn’t mean we should not try.

Today is the 100th day of the war in Ukraine. The fighting has many young American Jews who descend from the region reconsidering their identity — some who thought of themselves as “Russian-speaking Jews” now feel Ukrainian, and are even learning the language. Gabe Klapholz, who just graduated from Yale, explores the phenomenon in our cover story. Inside: Johnny Depp, baseball players who converted to Judaism, a family’s fight to reclaim their son’s remains from Gaza, a nurse fighting for Ukraine and 10 Jewish things you probably didn’t know about Superman.

The post It’s time to talk seriously about a Confederation of Israel and Palestine appeared first on The Forward.