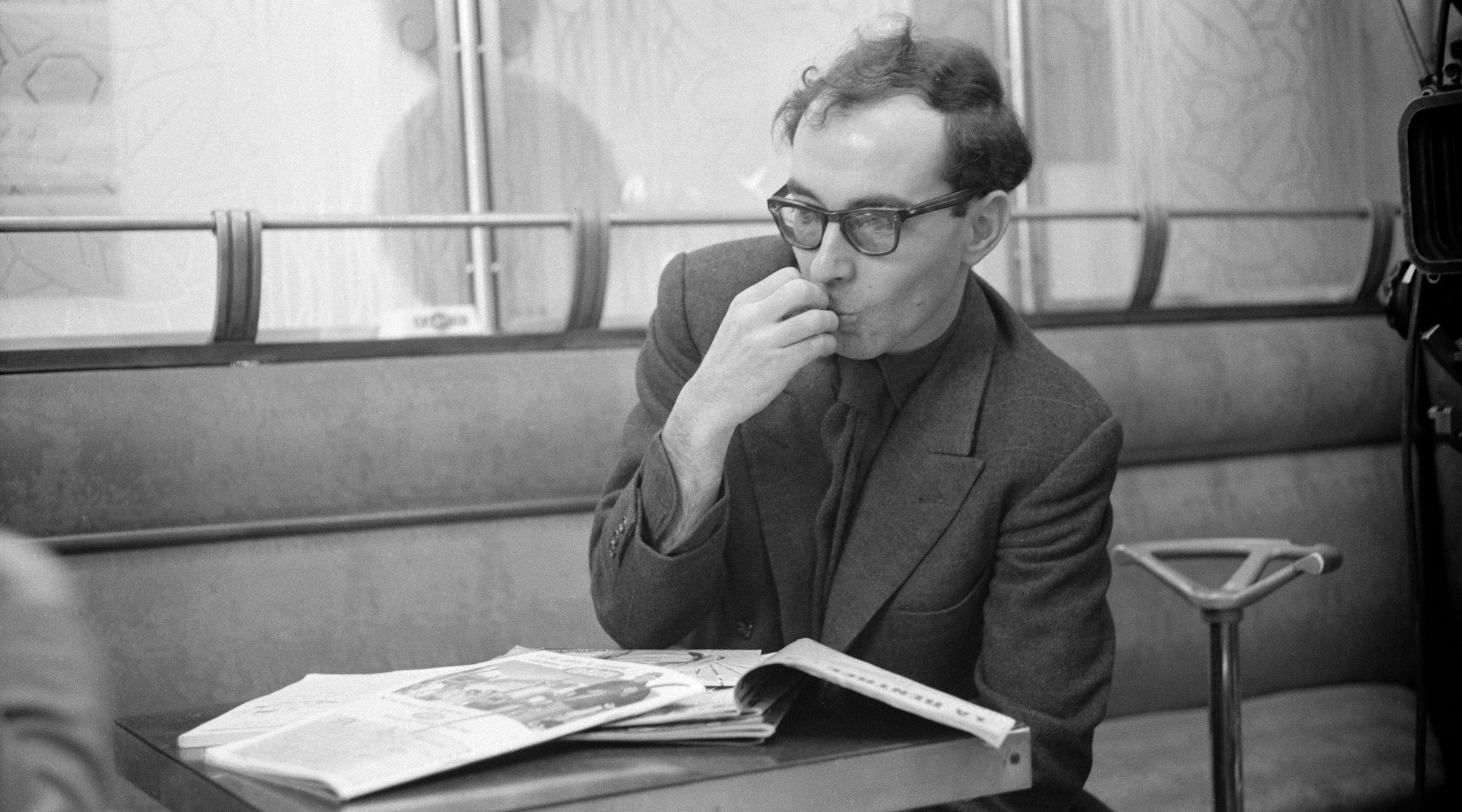 Jean-Luc Godard, revolutionary filmmaker who polarized Jews with his Israel and Holocaust commentary, dies at 91

(JTA) – In 2010, the Academy of Motion Picture Arts and Sciences announced plans to award French-Swiss filmmaker Jean-Luc Godard an honorary Oscar. Many in the Jewish community revolted.

Calling on the Academy to rescind the Oscar, the right-wing Zionist Organization of America called Godard a “virulent antisemite,” arguing that Godard had a record of making antisemitic comments and putting antisemitic language into his films. Jewish press outlets reported accusations that the filmmaker was an antisemite.

Such claims of antisemitism were a constant throughout the long and idiosyncratic career of the pioneering French New Wave filmmaker, who died Tuesday at age 91 from assisted suicide. But for Godard, life was just an extension of cinema — all a public performance, as his Jewish biographer Richard Brody chronicled in the book “Everything Is Cinema.” So while Godard the filmmaker continually made his movies into an expression of radical, sometimes contradictory politics, commentators and even close friends could never be certain if Godard the person truly held those views.

Even as his films included jokes about slaughtering Jews (in 1964’s “A Married Woman”) and a line about Jews inventing Hollywood (in 2010’s “Film Socialisme”), he also expressed sympathy for the Jewish people, befriended Europe’s leading Jewish intellectuals and engaged in rigorous, thoughtful debates about the ethics of how and when to depict the Holocaust on film.

All this came amid Godard’s outspoken pro-Palestinian activism. His 1976 essay film “Here and Elsewhere,” which he co-directed with his longtime partner Anne-Marie Miéville, includes positive depictions of Palestinian resistence fighters and juxtaposed former Israeli Prime Minister Golda Meir with Hitler. The film was born out of the remnants of the duo’s failed attempt to make a movie about Palestinian liberation, to be funded by the Arab League. According to reporting at the time by the Jewish Telegraphic Agency, a militant Zionist group calling itself “An Eye For An Eye” released stink bombs and mice into a Paris theater showing the film, much to the anger of the theater’s Jewish director, who called the attack “Nazi-like.”

Godard had once commented that his grandfather “was anti-Jew; whereas I am anti-Zionist, he was antisemitic.” And in 2018, he lent his name to a filmmakers’ boycott of a French event celebrating Israeli cinema.

When he wasn’t making abrasive public statements, Godard was making movies: over 100 of them during his career, including some with Woody Allen, whom he greatly admired (he cast Allen in his 1987 avant-garde rendition of “King Lear”). He first came to the world’s attention with his 1960 rule-breaker “Breathless,” about a disaffected criminal and his American girlfriend, which used frenetic editing and genre mash-ups to form a new kind of cinematic language. The movie brought the French New Wave and its accompanying stylistic innovations to the masses.

More acclaimed films followed, including “Contempt,” “Band Of Outsiders” and “Week End,” before the filmmaker dove headlong into Maoism and began incorporating radical political statements into his movies, embracing the outermost fringes of the art-house circuit. Decades later, he continued to push against the limits of what cinema could be with essayistic collages about a range of sociopolitical ideas, and even a 3-D film late in his career (2014’s “Goodbye To Language”).

Throughout, Godard was seen in the film world as a complex figure, a globally revered artist who enjoyed challenging conventional wisdom and getting a rise out of his contemporaries — including about the role cinema should play in Holocaust memory.

He (mostly) politely sparred with French Jewish contemporary Claude Lanzmann, director of the landmark documentary “Shoah,” over the ethics of Lanzmann’s approach to depicting the Holocaust without using any archival images. (Godard’s own work leaned heavily on archival images, which he saw as more ethical and authentic.) Yet Godard was also a huge admirer of “Shoah,” and he planned to undertake a series of debates about it in the late 1980s with Lanzmann and French Jewish intellectual Bernard Henri-Lévy, according to an account in Brody’s book.

By Henri-Lévy’s own account, which he published in 2010 when the Oscar-related antisemitism charges against Godard surfaced, the three men shared a “tone of friendship and relaxation.”

Plans to film such debates largely fell through. But in Godard’s eight-part video essay “Histoire(s) du Cinema,” released between 1988 and 1998, he returned to the subject of how to film the Holocaust, crafting montages of its various depictions as a way of critiquing them. Godard was interested in “the relationship between historical trauma and the capacity of the image to represent or depict that trauma,” as academic Miriam Heywood described it.

If Godard disagreed with but ultimately respected Lanzmann’s depiction of the Holocaust, the same couldn’t be said for his views on Steven Spielberg. Godard’s 2001 feature “In Praise Of Love” proved controversial because it served as a harsh takedown of “Schindler’s List.” In the director’s typically elliptical way, parts of “Praise” depict an elderly couple who fought in the French Resistance being approached by representatives of “Spielberg Associates” to sell the life rights to their story; elsewhere, the film openly accuses Spielberg of abandoning Oskar Schindler’s widow without proper compensation while profiting from her husband’s story. Spielberg was defended by most American critics at the time, with Roger Ebert calling Godard’s ire “painful and unfair.”

Yet filmmakers and cinema scholars alike were paying full tribute to Godard as a titan of the medium on Tuesday. “If you love movies and are interested in how they developed over the last century, you have to keep checking in with Jean-Luc Godard’s films periodically throughout your viewing life,” Jewish film critic and historian Mark Harris tweeted at news of his death. “There’s no way to grasp fully how movies got from there to here without him.”

As for the Oscars, they gave Godard their lifetime achievement award — over the objections of many Jewish groups at the time. But the filmmaker, combative to the end, didn’t bother traveling to the ceremony. He said the award “meant nothing to me.”

The post Jean-Luc Godard, revolutionary filmmaker who polarized Jews with his Israel and Holocaust commentary, dies at 91 appeared first on The Forward.