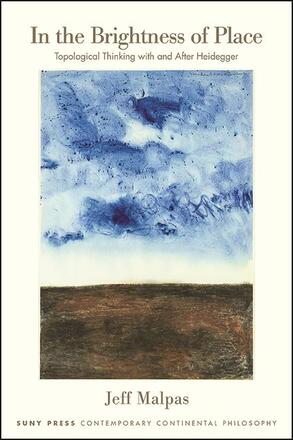 Jeff Malpas, In the Brightness of Place: Topological Thinking In and After Heidegger – SUNY Press, September 2022

Jeff Malpas, In the Brightness of Place: Topological Thinking In and After Heidegger – SUNY Press, September 2022

The work of Jeff Malpas is well-known for its contribution to contemporary thinking about place and space. In the Brightness of Place takes that contribution further, as Malpas develops it in new ways and in relation to new topics. At the same time, the volume also develops Malpas’ distinctively topological approach to the work of Martin Heidegger. Not limited simply to a reading of the topological in Heidegger, In the Brightness of Place also takes up the idea of topology after Heidegger, showing how topological thinking provides a way of rethinking Heidegger’s own work and of rethinking our own being in the world.

“Malpas has long been the leading figure in debates about Heidegger, philosophy and place. Building on that pioneering work, In the Brightness of Place represents an important contribution to several fields, most obviously around place, geography and landscape, but also to literature. The opening chapter on Heidegger’s notorious ‘Black Notebooks’ is particularly impressive. It treats them seriously—philosophically, politically, biographically—and shows how they can shed light on important issues in the reading and assessment of Heidegger.” — Stuart Elden, author of The Early Foucault

“In this magisterial book, Jeff Malpas lucidly sets forth the full span of Heidegger’s later thought. He draws the curtain on a broader vista than one might ever have imagined, ranging from meditations on the “other beginning” and the ‘turning’ to rethinking emotion and reason. He shows how what might otherwise appear to be a scattered multiplicity of topics gravitates around place understood as a deeply coherent core of Heidegger’s mature work. He demonstrates not just the plausibility of this core but just how unrefusable it is when taken seriously. The result is a triumph not only in Heidegger scholarship but in building a case for ‘the essentially placed character of being.’ The author’s luminous prose—which draws on many sources, not only philosophical (ranging from Hume and Kant to Arendt and Benjamin) but poetic and historical—conveys to us a profound truth of the human condition: to be is to be in place.” — Edward S. Casey, author of The World on Edge and Turning Emotion Inside Out