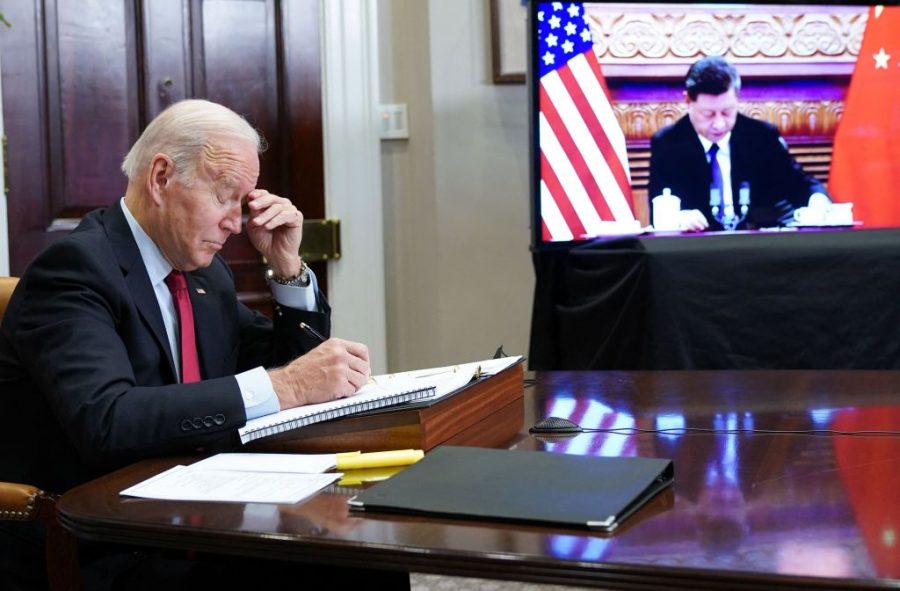 Don’t be fooled by the progressive rhetoric of the Biden administration’s new National Security Strategy (NSS), released earlier this week. With the document, the administration is recommitting to a basic principle of ruling-class foreign policy: US hegemony now, US hegemony forever.

At a moment of uncertainty in the global order, President Biden is cribbing from the same playbook that previous administrations have consulted in moments of geopolitical flux. And Biden is again prioritizing US dominance over cooperation and a more democratic global order.

In the past century, there have been two major shake-ups in the global order: the first following World War II and the second following the fall of the Soviet Union. In the wake of World War II, Washington fashioned an anti-communist, liberal internationalism to box out the Soviet Union in an attempt to shape the new world. It was an inherently colonial internationalism, with the United States holding a disproportionately powerful position in the United Nations. Throughout the Cold War, the United States flouted its ostensible guiding principles as it undercut the right to self-determination that colonized peoples were fighting for — often toppling democracies to achieve strategic ends.

Then, in the wake of the Soviet Union’s collapse, a new consensus emerged. With its archnemesis gone, Washington was free to export capitalist democracy across the world, with the twin goals of cementing the United States’ dominant role and fashioning a global order in its image. It was this vision that guided the country’s Forever Wars, “humanitarian interventions,” and evolution into a global police power.

Today, Biden sees the world as at a new “inflection point,” and his NSS reveals his own brand of American hegemony: one that says the right things about global collaboration, but neglects to challenge the fundamentals of the foreign policy status quo. Gone are previous visions of anti-communist internationalism or frictionless globalization. In their place, Biden’s NSS offers a vision of transnational cooperation — but one that the United States’ hegemonic instincts easily overwhelm.

To its credit, Biden’s new strategy does seek to rectify foreign-policy blunders of previous administrations. It recognizes transnational challenges like COVID-19 and climate change — a marked improvement, considering the Trump administration’s strategy document mentioned “disease” exactly three times and declined to mention climate change altogether. Biden’s document also pronounces a close to the “era of major military operations to remake other societies,” a welcome development to supporters of US military restraint.

Yet at the same time, Biden’s NSS is a flat-out refusal to risk the United States’ pole position for the sake of cooperation against transnational challenges. Nowhere is this clearer than in the strategy’s discussion of China, which dominates the document. Biden flatly asserts that China is the “only competitor with both the intent to reshape the international order and, increasingly, the economic, diplomatic, military, and technological power to do it,” and that the United States must do everything to outcompete it. He casts the United States–China rivalry as a broader contest between democracy and autocracy, from which democracies are naturally bound to emerge victorious. Yet however he frames US competition with China, it’s clear that Biden intends to preserve US hegemony first and carve out room for cooperation second.

Biden does allow for some room, if only in rhetoric. He insists his administration isn’t seeking a new Cold War with China, nor a world where great-power competition forces states to fall into rigid security blocs. He says that his administration will “avoid the temptation to see the world solely through the prism of strategic competition.”

But that’s hard to square with his position that China is a threat to the United States, and even harder to square with the way United States–China relations have played out recently. Biden has ramped up a technological war on China, dropped the United States’ long-standing policy of “strategic ambiguity” (which seeks to maintain the China-Taiwan status quo), and threatened to go to war if China attacked Taiwan.

Finally, Biden’s NSS floats the idea that the United States can compete with China vigorously while managing the competition “responsibly.” Whatever that means — and it’s hard to imagine “responsible” great-power competition with China — there’s a broader, simple truth at play here that the administration seems to ignore: competition and cooperation often pull in opposite directions, with one’s gain the other’s loss. If the United States isn’t willing to accept a more multipolar world, perilous conflicts will become the inevitable norm.

Halfway down page twenty-five, Biden’s NSS distinguishes the Chinese government from the Chinese people and inserts a boilerplate statement against racism. I’d normally hesitate to call it “boilerplate,” except the text — “Racism and hate have no place in a nation built by generations of immigrants to fulfill the promise of opportunity for all” — matches word-for-word a line from an Anthony Blinken speech on China this past May. (It doesn’t help that this sentence in the NSS document is a different color from the surrounding text, suggesting copied text.)

The line is a minor gaffe, but it’s emblematic of how we should understand this NSS. In the same way Biden’s document offers a token gesture toward racial justice, its attempts to invoke progressive foreign-policy values amount to little more than flowery rhetoric. Biden’s strategy is further evidence that if Washington elites keep getting their way, we should expect great-power competition to continue trumping cooperation.