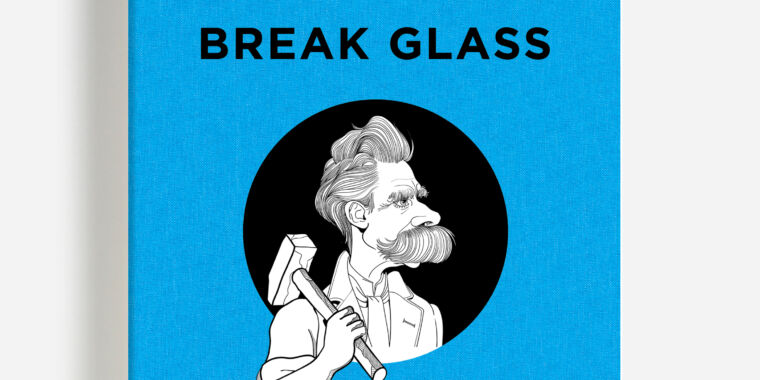 This is an excerpt from the new book In Emergency, Break Glass: What Nietzsche Can Teach Us About Joyful Living in a Tech-Saturated World, by Ars Technica’s Deputy Editor, Nate Anderson.

The book “adapts Friedrich Nietzsche’s passionate quest for meaning into a world overwhelmed by ‘content.’ Written long before the advent of smartphones, Nietzsche’s aphoristic philosophy advocated a fierce mastery of attention, a strict information diet, and a powerful connection to the natural world. Drawing on Nietzsche’s work, technology journalist Nate Anderson advocates for a life of goal-oriented, creative exertion as more meaningful than the ‘frictionless’ leisure often promised by our devices.” In a starred review, Publisher’s Weekly called it “a must-read for anyone overwhelmed by the Information Age.” Also, it has jokes.

No one ever accused Nietzsche of modesty. The man was convinced of his own world-shaking destiny, which must have been tough to sustain when only a few hundred people were reading his books. Still, Nietzsche offered his then-nonexistent readership tips for properly absorbing his works—especially his more “aphoristic” books. Nietzsche describes his ideal reader in the preface to Daybreak:

A book like this, a problem like this, is in no hurry; we both, I just as much of my book, are friends of lento [slowness]. It is not for nothing that I have been a philologist, perhaps I am a philologist still, that is to say, a teacher of slow reading:—in the end I also write slowly. Nowadays it is not only my habit, it is also to my taste—a malicious taste, perhaps?—no longer to write anything which does not reduce to despair every sort of man who is “in a hurry.”

Anyone who has tried to read Daybreak straight through, as though it were a novel, will run headlong into Nietzsche’s “malicious taste.” The goal was to craft a form that embodies the qualities encouraged by the content: pithy nuggets demanding careful thought, mental experimentation, and wide-ranging curiosity about morality and psychology. By forcing his readers to proceed slowly if they want to make sense of the book, Nietzsche puts a preemptive stop to bingeing.

This call to read more slowly, and with greater engagement, is not reserved for Nietzsche’s books. In the same preface, he speaks more widely about European culture, which he thought valued speed and productivity above all else. (Sound familiar?) But we must value the ability to “go aside, to take time, to become still, to become slow,” because careful thinking is “delicate, cautious work” that “achieves nothing if it does not achieve it lento.”

Do we want to process information this way? Nietzsche thinks we do—that we will be enchanted by the opportunity to go slow in an “age of ‘work’: that is to say, of haste, of unseemly and immoderate hurry-skurry.” We must learn instead to “read well: i.e. slowly, profoundly, attentively, prudently, with inner thoughts, with the mental doors ajar, with delicate fingers and eyes.”

To consume information slowly becomes, in this telling, an act of resistance against a dehumanizing technological order. Much like the Slow Food movement, Nietzsche’s Slow Content assumes a political and ethical dimension. When it comes to our information diet, it matters how we read, watch, and listen.

It’s not clear that many people today believe this, though. If “slow reading” is so liberating, why has every lit major with a Twitter feed written a thread about how they once loved big Russian novels such as Anna Karenina but now struggle to make it through lifestyle articles in the newspaper? In one sense, the reasons are obvious. We have too many tabs open! Someone texts me after each paragraph I read! I’m watching Netflix on my second monitor right now!

And yet, given the discomfort so many people express about binge-driven, skim-oriented, hyperlinked culture, one might expect more cultural support for slow reading. There is some— apps that store long articles for later reading, the whole genre of “longreads,” the continued existence of the New Yorker. But it’s hard to fight those dopamine hits of novelty that make sustained attention so difficult.

This can be true even in the centers of learning. English professor Mark Bauerlein complains, in the course of commenting on the Nietzsche passages above, that universities also struggle with slow reading.

Young people today process more words than ever before and in faster time—allegro, not lento. To meet them, more classrooms and more course assignments follow suit, for instance, assigning blogs instead of papers, short readings instead of long ones. The unfortunate truth is that fast reading and fast writing don’t make people more flexible, more capable of slow reading and writing when the situation demands them.

Nietzsche calls us to consciously resist speed and to guard our attention and deploy it in focused ways. Just as jamming food into one’s belly is liable to feel bad, information too should be consumed at a certain pace and with a certain care. As with food, there are always exceptions—the quick snack on the run, the rushed meal before the concert—but they are the exceptions that prove the rule.

Much as Slow Food demands good ingredients, Slow Content demands a certain quality of material. Amid climate change, global pandemics, and a rising wave of authoritarianism, we might desire nothing but a dumb comedy at the end of the week. Or we might seek cathartic release in online outrage. Or we might obsessively consume the news. We may want, that is, the information equivalent of fast food. No matter how good it may feel, though, we need to limit this kind of content consumption to keep ourselves healthy.

Nietzsche was convinced that human life is about transformation and transcendence, and that our best hope for achieving them is reflection in the presence of strong ideas. That is, much of our reading and listening and watching should focus on artists and thinkers and friends who have something meaningful to say.

Arthur Schopenhauer, to whose philosophy Nietzsche was devoted as a young man, once wrote, “The art of not reading is a very important one.” Schopenhauer assumed most popular books were rubbish on the grounds that “he who writes for fools always finds a large public.” And so, for him, “a precondition for reading good books is not reading bad ones: for life is short.”

Nietzsche embraces this idea of “not reading” and turns it into a radical principle of selection. He praises people who have an instinctive sense for the material that will matter to their lives. “What is it, fundamentally, that allows us to recognize who has turned out well?” Nietzsche asks.

What does not kill him makes him stronger. Instinctively, he collects from everything he sees, hears, lives through, his sum: he is a principle of selection, he discards much. He is always in his own company, whether he associates with books, human beings, or landscapes: he honors by choosing, by admitting, by trusting.

Such people do not indiscriminately welcome content into their world. They are “principles of selection,” thoughtful about what they choose to admit, because each admission is an act of trust. If we are going to put ourselves in the hands of a writer or a director or even a conversation partner, and if we are going to give that person our full attention over the course of many hours, we hope that the process will be worthwhile. We are shaped by what we consume, which makes our information inputs not just matters of aesthetic taste but also matters of morals and ethics.

Few are worthy of such trust. In his early career, Nietzsche names only eight: Epicurus, Montaigne, Goethe, Spinoza, Plato, Rousseau, Pascal, and Schopenhauer. Only from them, he says, “will I accept judgment.” He has judged them important enough that they will guide all his habits of mind. “In all that I say, conclude, or think out for myself and others, I fasten my eyes on those eight and see their eyes fastened on mine,” he writes.