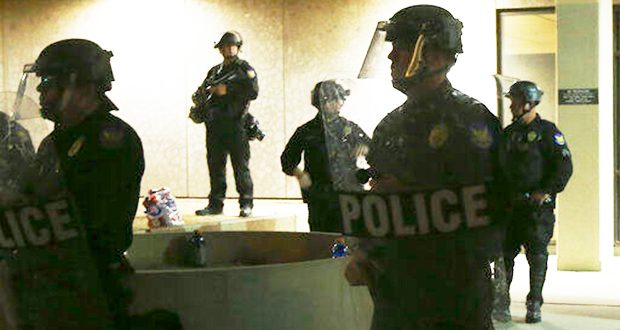 In this file photo, Phoenix Police stand in front of Phoenix Police Headquarters Saturday, May 30, in Phoenix, waiting for protesters marching to protest the death of George Floyd, a handcuffed back man who died in police custody with much of the arrest captured on video of a Minneapolis police officer kneeling on the neck of Floyd. (AP Photo/Ross D. Franklin)

When Apple launched the iPhone, it could not have imagined how profoundly the technology would change the world. From giving us a lifeline during the Covid pandemic to putting the news at our fingertips, smartphones have broken down barriers.

Take police encounters, for example. In 2014, we watched as Eric Garner gasped, “I can’t breathe.” Six years later, we watched again as an officer knelt on George Floyd’s neck until he, too, stopped breathing. There are countless more examples of videos that were only possible because of the little rectangles in our back pockets. Instead of lauding the increase in information, Arizona has used smartphones as an excuse to infringe on constitutional protections. On July 6, Gov. Doug Ducey executed a law that makes it illegal to record within 8 feet of police activity. Not only is this law practically unreasonable — most people don’t walk around with measuring tape — it is unconstitutional and contradicts the resounding guidance from the federal courts of appeals.

On July 11, the U.S. Court of Appeals for the 10th Circuit held that the First Amendment guarantees the right to record police activity. As the court explained, the First Amendment’s purpose is to protect news gathering and the free discussion of government affairs.

The court also explained that recording is “unambiguously” speech creation, and if the Constitution didn’t protect the creation of speech, “the government could bypass the Constitution by simply proceeding upstream and damning the source of speech.” Together, these principles eliminate any room for doubt: The right to record police activity, whether it is within 8 feet of a smartphone, is constitutionally protected. The 10th Circuit isn’t alone. It joins every federal court of appeals to address the issue. Over the last 25 years, the First, Third, Fifth, Seventh, Ninth and 11th Circuits — and now the 10th — have held that the First Amendment protects the right to record police.

Yet Arizona — which is part of the Ninth Circuit — now places extreme restraints on that right to record. To defend this infringement, the bill’s author, Rep. John Kavanagh, R-Fountain Hills, argues that the bill is fine because it only prohibits recording “potentially violent encounters.”

But this argument has three fatal errors: First, it’s wrong. The law simply states that it is illegal to record within eight feet of law enforcement activity. The term “violent” appears nowhere in the statute. Second, even if the law only limited the recording of “potentially violent encounters,” that law would be unconstitutionally vague. Kavanagh does not explain what makes an encounter “potentially violent,” but, presumably, any encounter where one of the individuals has a gun on one hip and a taser on the other has the potential for violence. Third, whether the law is limited to “potentially violent encounters” or not (and it’s not), it still does not pass constitutional muster.

No constitutional right is unlimited. But when it comes to content-based restrictions on speech, like Arizona’s law here, the government may only impose restraints that are the least restrictive way to satisfy a compelling government interest — commonly referred to as strict scrutiny. This new law does not come close.

As the 10th Circuit explained in its recent opinion, peacefully recording police in a public space, without interfering with law enforcement activity, is not reasonably subject to any restrictions. Yet, here, Arizona has imposed a blanket restriction against recording police within 8 feet of any encounter.

Kavanagh claims the law will protect people from dangerous situations and prevent interference with police activity. But the law is in no way narrowly tailored to serve these objectives. And, under Arizona law, it is already a crime to interfere with law enforcement.

Arizona has restricted the right of the people to record police in public, regardless of whether recordings are made peacefully or whether there is any actual interference with law enforcement. This is not the least restrictive means to serve a compelling government interest. It is, as the 10th Circuit warned, the government bypassing the Constitution.

Technology has given citizens the power to be informed and engaged. And it has also given states the opportunity to improve transparency and build trust. Arizona should seize that chance, not infringe on the Constitution.

Alexa L. Gervasi and Anya Bidwell are attorneys with the Institute for Justice in Arlington, Virginia.