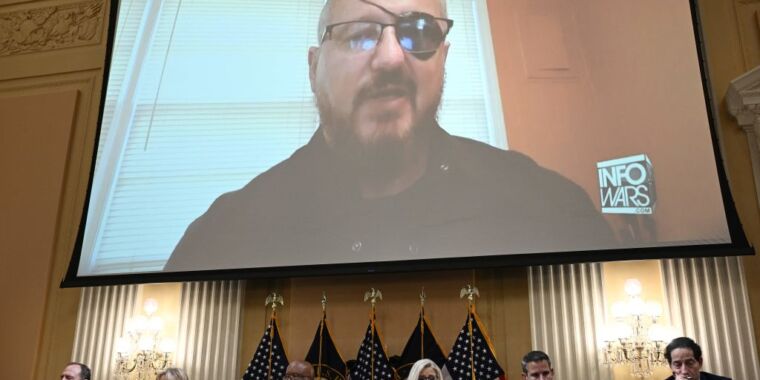 As reports tracked a string of violent events leading up to Oath Keepers’ involvement in the Capitol riots, it remained difficult for outsiders to discern just how effective the nonprofit group’s recruitment really was at targeting people with real power. Then in fall 2021, the Distributed Denial of Secrets published a massive data leak, revealing names and addresses of 38,000 Oath Keepers and donors. Sorting through the data, the Anti-Defamation League Center on Extremism (COE) saw an opportunity to cross-reference public data on listed members and map out approximately how far Oath Keepers has come in furthering its mission to establish a secure “foothold in mainstream seats of power” throughout the US.

In a report published this week, COE identified 373 people in the Oath Keepers database believed to be active law enforcement officers, 117 people who seem to be currently serving in the military, and 81 public officials who either currently hold or are running for public office in 2022.

COE’s report says that the hundreds of people identified as likely active law enforcement was “far higher than any previously identified number of extremists within law enforcement,” and, though much lower, the discovery of dozens of elected officials is “deeply concerning.”

In addition to identifying people who actively hold power, their report showed that Oath Keepers was affiliated with an even wider population of former law enforcement and military personnel. From the leaked list, COE identified 1,100 individuals who previously served in law enforcement and estimated that thousands—”one in ten of the individuals in the database”—had “served in the military in some prior capacity.”

COE also says it’s possible that the total number of Oath Keepers in the database affiliated with law enforcement, military, or public office could be higher, depending on how much an individual values privacy. “It is possible that these numbers do not fully account for individuals who may have moved a significant distance, those who do not have an online presence, and those who do not self-identify their profession on their social media pages,” the report reads.

COE stressed that just because an individual is identified as listed in the database, this “is not proof that they were or are still an Oath Keeper.” To confirm any suspected ongoing affiliations with Oath Keepers, COE recommended that “individualized assessment of the individual must take place.”

The Associated Press spoke to a limited range of people whom COE identified, some of whom confirmed they are no longer connected to the group. Reasons for quitting Oath Keepers included having no access to a local chapter, receiving too many emails, and rejecting the group’s increasing extremism. However, others whose comments are documented in the database leak did not seem to consider their membership passive. One individual whom COE believes to be a staff sergeant currently in the Army wrote, “I am still active and do not like the direction America has been going the last decade. I know it is up to men like me to make a brighter future for our nation.”

The bigger picture that the data paints alarmed COE, which told Ars that this is just the beginning of their inquiry into Oath Keepers’ seemingly increasing access to people in power. “We, of course, will continue to track the Oath Keepers and their infiltration into public life,” a COE spokesperson told Ars.

At the top of COE’s report, there’s a map that shows total Oath Keepers signups by state. By mapping out the group’s expanding access to power, COE makes it easier to see which states should be most concerned with security threats—including extreme scenarios like Oath Keepers accessing confidential documents or stealing police gear.

The state perhaps most in need of monitoring is Texas. It not only “has the most people who signed up for the Oath Keepers” (3,300), but it also signed up the most law enforcement officers, military members, first responders, and elected officials in total (58).

New York stood out for recruiting the most law enforcement officers (45), Virginia the most armed forces signups (15), and Illinois the most first responders (10).

COE reported that Oath Keepers targets these groups for recruitment because they have “unique skillsets to advance” Oath Keepers’ cause, and “the presence of group members in these institutions will obstruct any order, law, or action that the organization deems unconstitutional.” The report listed skills touted by people in the database, ranging from sharpshooting training to programming radio equipment and developing web applications.

The most extreme example of an Oath Keepers effort to obstruct an action that the group deems unconstitutional was reportedly the Capitol riots. Twelve members of Oath Keepers so far have been indicted for opposing, by force, the peaceful transfer of presidential power. Most recently, Oath Keepers’ founder, Stewart Rhodes, fired his lawyers and requested to delay his trial, while Oath Keepers’ acting president and general counsel, Texas attorney Kellye SoRelle, was last week arrested for her alleged role in the insurrection. Ars could not immediately reach Rhodes or SoRelle’s law office for comment.

While investigations into the Capitol riots continue, Oath Keepers’ expanding influence seems to be focused on recruiting for chapters locally. COE noted in its report that it identified no federal public officials listed in Oath Keepers’ database. “Most of the individuals in the database who hold public office do so at the local level, including through positions on town councils, in sheriff’s offices, on school boards, and in mayoral offices,” the report says.

That doesn’t mean that local chapters have limited reach, though. COE documented comments from military members listed in Oath Keepers database who claimed to have influence over as many as tens of thousands of soldiers and sailors, as well as one who swore his personal relationship with his foreign ambassador father meant that his “potential international connections” for the organization “are vast.”

“To know that members of this group have permeated key aspects of civil society should serve as a wake-up call to people of all political persuasions that extremists hell-bent on destroying our democratic norms are making in-roads across the country,” Greenblatt wrote.