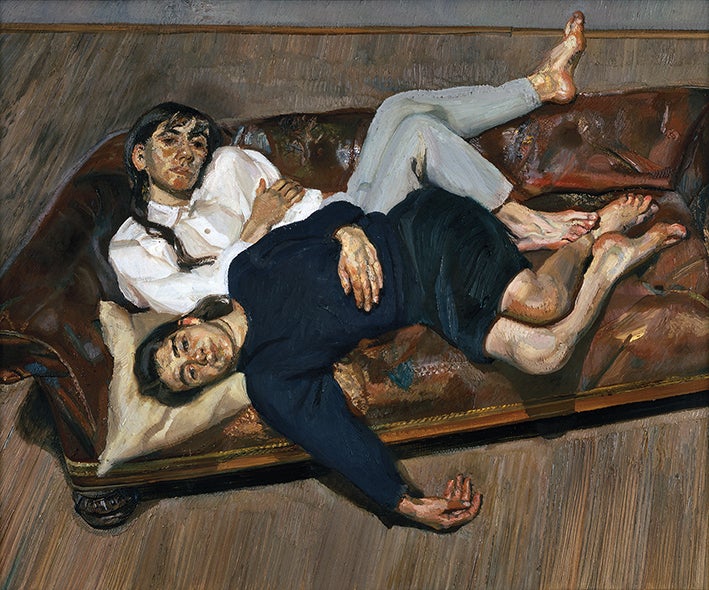 According to Lucian Freud, “Gossip is only interesting because it’s all there is about anyone.” If he was right, then there was an awful lot to Freud. Gossip and anecdotes about him are not just legion but usually true. He was determined not to be trammelled by conventional morality and acted accordingly; indeed, the psychologist who assessed him for wartime conscription exempted him on the grounds that he was “a destructive force in the community”. His behaviour, especially towards women, was frequently appalling, but he gave himself a get-out clause: “A painter,” he said, “must think of everything he sees as being there entirely for his own use and pleasure.” It was a convenient credo.

Freud, however, was also committed to painting and was steadfast in his adherence to the old genres of figure painting and portraiture in particular. Artistic styles were less interesting to him than the problem of representation. He wanted to “move the senses” not through colour, abstraction, the appropriation of pop culture or any of the other themes of the art of the second half of the 20th century, but through what he called “an intensification of reality”. His ambition was huge, and unrealisable: “I would wish my portraits to be of the people, not like them. Not having a look of the sitter, being them.”

He stuck to this conviction for 70 years, even if it cost him dearly. It is hard to imagine now, but in the late 1980s and early 1990s Freud was so out of favour that after a squabble with his dealer he sold nothing for two and a half years. He seemed then merely the descendent of a worn-out tradition and kept himself afloat by gambling until flashier newcomers lost their lustre, and the seriousness and particularity of his work – what his biographer William Feaver describes as the “sheen of hair, weight of eyelids, and individuality of wrist, fingernails and nipples” – was re-appreciated. If there was much ignoble about Freud, there was nobility in his refusal to change his course.

Freud was born in 1922 (he died in 2011) and this centenary year sees a major exhibition of some 65 works at the National Gallery, “Lucian Freud: New Perspectives” (1 October – 22 January 2023); a show at the Garden Museum next to Lambeth Palace recognising him as a scrupulous observer of flora, “Lucian Freud: Plant Portraits” (14 October – 5 March 2023), while “Horses & Freud”, a loan display at the Ordovas gallery on Savile Row in London (runs until 16 December) reveals his fascination with the equine world. “Lucian Freud: The Painter and His Family” presents a selection of his work and assorted memorabilia at the Freud Museum, the north London home of his grandfather Sigmund (runs until 29 January 2023). And there is also the publication of a collection of his early illustrated correspondence, Love Lucian: The Letters of Lucian Freud 1939-1954 (Thames & Hudson).

Of course, Freud’s own fame – or infamy – was inextricable from the paintings themselves. He arrived in England from Germany in 1933 when his parents escaped the Nazis, and his celebrated surname marked him out from other émigrés. Despite intermittent schooling – including expulsion from Bryanston for a bottom-bearing prank – and a stop-start artistic training, he was a person of interest from his teenage years onwards, quickly becoming part of a high artistic and literary circle where he was compared to Rimbaud and to Tadzio in Death in Venice. One of his sitters later said that to be with him was “like putting your fingers into an electric socket”, and among those who felt his charge was Stephen Spender, who confided to TS Eliot that he was in love with the 17-year-old Freud. “There’s nothing I understand more,” the elder poet wrote back.

One of the few artists whose influence the painter would acknowledge was Cedric Morris, who ran an unconventional art school, attended by Freud, at Dedham, in Constable country on the Essex-Suffolk border. Freud would later claim he burned the place down courtesy of a discarded cigarette. However, other influences were perhaps more apparent: his work of the 1940s is, for example, evidence of how closely he had examined the work of first the German expressionists and then Hans Holbein and 15th-century Flemish “primitives” such as Hans Memling, as well as the French neoclassicist Jean-Auguste-Dominique Ingres. Freud’s pictures such as Girl with Roses (1947-48) and Girl with a Kitten (1948) are thinly painted, small in scale, delicate and exemplify his desire that they “reveal some of the results of my concentration”.

The sitter for these two paintings was Kitty Garman, the daughter of the sculptor Jacob Epstein and niece of Freud’s former lover Lorna Wishart (herself a lover of Laurie Lee, with whom Freud had fisticuffs: Lee’s “blood, or sweat, smelt revolting”, recalled the painter). Freud and Garman married and she gave birth to the first of his innumerable children (another lover, the painter Anne Dunn, once said that if she had trouble sleeping, “instead of counting sheep, I count Lucian’s children”). After the marriage broke up, Epstein would refer to his former son-in-law as “the spiv Lucian Freud”.

The hallucinogenic force of Freud’s pictures of Garman, however, express the intensity of his feelings both towards her and the craft of painting. He turned her into a still life; as the painter Michael Ayrton pointed out, in his pictures, “content is utterly static”. Garman does not so much hold the rose or the kitten as squeeze them into immobility so that her febrile concentration is a mirror of the painter’s own. It was pictures such as these that led the prominent art theorist Herbert Read to tag Freud the “Ingres of existentialism”.

In the 1950s Freud’s minimalist style gradually evolved into something more expansive. He concentrated almost exclusively on portraits, although plants, either with or without a sitter present, continued to appear: he painted, drew and etched some 100 botanical pictures (one of them, Two Plants, took three years – 1977-80 – and proved so difficult that it drove him “around the bend”). Interior at Paddington (1951), for example, is dominated by a yucca plant shown not only with the same fidelity as the standing figure of the odd-job man and photographer Harry Diamond but in the same drab khaki colours and closer to the viewer. Spiky, dishevelled and slightly wilting, it is as much the real subject of the picture as the man.

This ménage – figure, interior scene, prop – remained the basic scenario for the majority of Freud’s pictures for the length of his career and stayed consistent as his style changed. The paint became thicker, the paintings larger and the perspective tilted so that floorboards lurch like the deck of a ship, but the key elements were the same.

Freud rarely painted portraits to commission. Madonna pestered him: “Would I phone her urgently. I never did.” John Paul I was rejected, as was Andrew Lloyd Webber, who wanted his wife painted: “He even threatened me with theatre tickets.” Instead he took his daughters (“It’s nice when you breed your own models”) and his friends as his subjects, and he had plenty of both. Modelling for him was an arduous and extended ordeal. For Andrew Parker Bowles it meant innumerable sittings over two years: “What on Earth do you want to go and do that for?” asked Prince Philip. Nevertheless, Parker Bowles gave Freud – both were great horse fanciers – a tip for the Cheltenham Gold Cup that netted the painter £1m.

Parker Bowles and the plutocrats Jacob Rothschild and Heini Thyssen (who stationed two security guards outside the studio door when he was being painted) were allowed to keep their clothes on. Many of his other sitters, from his daughters and Freud himself to the performance artist Leigh Bowery and the then benefits supervisor Sue Tilley, were painted nude. “I don’t think of genitals as special,” he said. Rather, depicting naked flesh was a way of continuing the classical tradition (Titian was a hero figure) and he found it “exciting to see the forms repeating right through the body”.

It was also perhaps a means to intimacy. Freud confessed to his failures as a father and spending time painting some of his children was a way of making up for his absenteeism during their childhoods – a restitution he would reinforce with the gift of a flat or payment of school fees. During sitting after sitting, he got to know them. With his mother, Lucie, whom he painted over and over again, even after her death, depiction was an expression of love. For decades he had felt smothered by her affection and had avoided her, but when his father died in 1970 she attempted suicide and it brought Lucian back to her. It has been estimated that during the 1970s alone he spent 4,000 hours painting her, and his pictures of Lucie, often compared to those by Rembrandt of his own mother, are the most personal and tender of all his works.

The liquid licks of Freud’s paintings of the 1960s and 1970s gradually turned into thicker impasto and in the early 1980s he started to translate his absorbed gaze on to 6ft canvases. These pictures in the grand tradition tended to contain a precarious balance in which floors turn upwards while the artist’s/viewer’s gaze looks down on a figure or figures splayed on a mattress or daybed. The sitter, despite the heft of some of them, is almost on the verge of toppling.

The painter Celia Paul, another of his lovers, said sitting for Freud was “pitiless”, but then he believed that “the one thing more important than the person in the painting is the picture”. His naked models are not just stripped of clothes but of their personality and position too. He was not interested in whether the acreage of flesh was lovely or unlovely; it was simply necessary to him. Some of the six-footers could take three years to complete, with days accounting to no more than a dab or two. Bowery would infuriate him by adding a blob of paint here and there when Freud left the room.

One of the rough-trade crew who were his neighbours in Paddington in the 1950s once asked him: “’Ere, Lu: do you do that Epsteen stuff? That Picasso stuff?” He didn’t explain that what he did, and what he would always do, was Freud stuff.

[See also: Hilary Mantel: “I had to be in middle age to imagine what the weight of life does to you”]