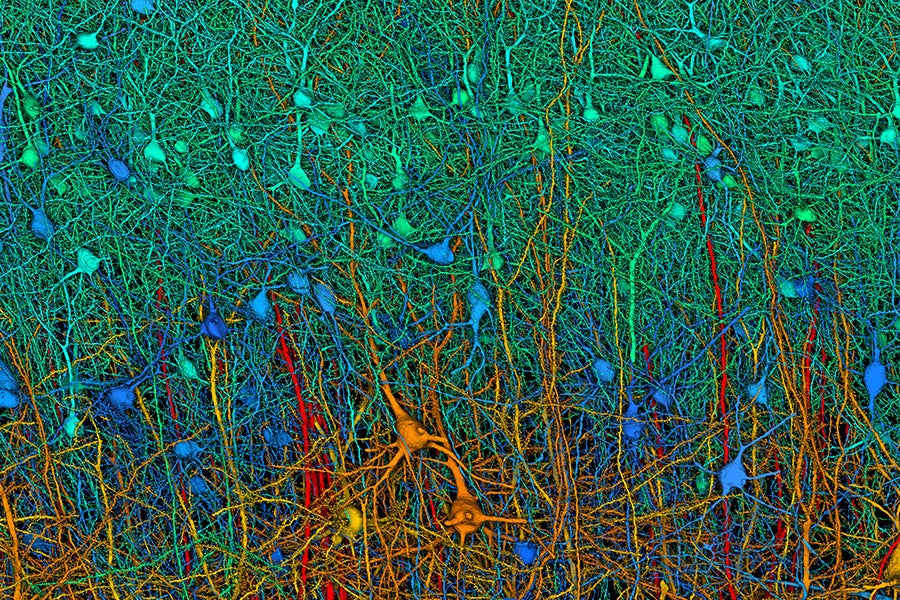 Mapping the Brain to Understand the Mind

Neuroscientists have long aspired to understand the intangible properties of the mind. Our most treasured cerebral qualities, like the ability to think, write poetry, fall in love and even envision a higher spiritual realm, are all generated in the brain. But how the squishy, pinkish-gray, wrinkled mass of the physical brain gives rise to these impalpable experiences remains a mystery.

Some neuroscientists think the key to cracking that mystery is a better map of the brain’s circuitry. Nearly 40 years ago, scientists achieved a milestone by completing a wiring diagram that traced all the connections of the 302 neurons of the roundworm Caenorhabditis elegans. They were traced by hand on printed sheets of electron microscope images, a meticulous and herculean task that took years to complete. The project marked the first-ever complete connectome—a comprehensive map of the neuronal connections in an animal’s nervous system.

Today, thanks to advances in computing and image analysis algorithms, it can take less than a month to map a roundworm’s connectome. These technological improvements mean that scientists can set their sights on larger animals. They are closing in on the connectome of fruit fly larvae, with more than 9,000 cells, and adult flies, with 100,000 neurons.

Next, they hope to map the brain of a developing fish and, perhaps within the next decade, a mouse, with roughly 70 million neurons—a project nearly a thousand times more ambitious than any done so far. And they have already started to map small pieces of the human brain, an unfathomable quest when the worm connectome was initially mapped.

Although some neuroscientists have argued that maps alone can’t tell us much about the function of the brain, several recent studies have suggested otherwise—at least for smaller animals. In a study published in October 2021, for example, researchers examined a region of the fruit fly brain that helps the flies navigate during flight. By mapping the connectome of this region, the scientists identified new types of neurons and showed how their connections could enable a fly to perform the needed computations. Another study, published in September 2021, combined roundworm connectome data with techniques for visualizing neural activity to show how specific neurons contribute to specific aspects of the worm’s mating behavior.

Harvard neuroscientist Jeff Lichtman is at the forefront of connectome research. His lab is working to map the neural circuitry of different animals, including worms, flies, fish, mice and humans, and he has developed several methods now used by other researchers in the field. He was a codeveloper of Brainbow, for example—a genetic technique that can label individual neurons in hundreds of different hues, producing spectacular images of the brain. More recently, he has developed tools to analyze tiny slices of brain with high-resolution electron microscopes. In 2021, Lichtman made another major contribution when he and colleagues at Google and Harvard posted a report, still to be peer-reviewed, of a complete wiring diagram of a pinhead-sized piece of the human brain.

Lichtman, who coauthored an overview of the challenges of extracting useful information from the vast amounts of connectomics data in the Annual Review of Neuroscience, spoke with Knowable about how the field might lead to a deeper understanding of brain function. This conversation has been condensed and edited for clarity.

Why do we need neural maps to understand the brain?

There’s a whole bunch of different answers to why we need them. The thing about the brain that is different from all the other organs is that its function is mediated through cells communicating with each other over large distances. Neurons have this unique property: They can send a part of themselves, their axon, a very long distance. In mammals, these distances can be over a centimeter or more. In the case of a giraffe, some of the neurons are probably many meters long. You can’t understand the function of that cell if you can’t trace where it is sending its axon and whom it is talking to. So, mapping those connections is fundamental. It is a requirement that is not relevant for studying any other organ system in the body.

How does connectomics differ from traditional neuroscience?

Connectomics is a mapping tool that is really perfect for revealing things about the brain that you need to know to generate new hypotheses. More often than not, what moves the needle in science is not the fact that someone came up with a great hypothesis and then put it to the test. But rather, the data revealed something that didn’t fit the hypothetical landscape at the time and forced people to think in new ways. The data provide you with things that your imagination wasn’t big enough to have thought of.

Do you think we need new hypotheses about the brain?

I am of the opinion that most of our ideas about the brain are wrong. They are wrong because we have no data, and techniques like mapping provide the data that will give us a more accurate sense of what the brain really is. Most human thought is more naïve than the biological processes it is trying to explain. I think a truism in neuroscience is that the thoughts that come out of the human brain are not as complicated as the machine that generates them.

If that’s true, how will our thoughts ever be able to understand the complex functioning of the brain?

It is quite ironic, isn’t it? That this very complicated machine generates thoughts that are not nearly as complicated as it is. But humans have done a really amazing job in describing other complicated phenomena like the behavior of light. In fact, it is one of the most successful theories humans have ever come up with, but no thinking person would ever come up with it unless forced to by reality. The idea that a photon can act as either an infinitesimal particle or a spread-out wave is just crazy. Understanding the human brain is far more complicated, though.

When we are thinking, our brain is doing thousands or even millions of things simultaneously. This is no problem for the brain. But for our conscious thought process, which usually only attends to one thing at a time, it is a problem.

I think neuroscientists who study connectomics feel very much like explorers because they are going into a terrain that feels alien. The best we can do is be like the early naturalists who first cataloged plant and animal species that hadn’t been seen before. In the near term, I don’t think we will be able to explain it or command it—there is a lot of hubris in claiming we understand the brain enough to do that. But I think we will be able to describe it. And maybe from those descriptions we can come to some understanding of what is going on.

You are involved in two very large-scale efforts: to map the mouse and human brain. Can you tell us more about the challenges?

Well, connectomics is a pipeline. You start with an animal and at the other end, after maybe 10 or 20 steps, you have a wiring diagram. First, you have to preserve the tissue, then you have to stain it, embed it in resin, cut slices and take images of them. And then you have to stitch those images together and align them. Then you have to proofread what you’ve done with artificial intelligence. And only after you’ve done all that can you even get started on the reason you did all this, which was to map out the connections. But every one of those steps, and I skipped a number of them, could fail for a number of reasons. If you have 20 steps that each have a 90 percent chance of succeeding, you will succeed only 1 in 8 times. So there’s a mathematical reason why it is hard to get all the way to the end.

Critics argue that a connectome alone can’t reveal how the brain works, and some point to the fact that scientists have had the worm connectome for four decades and still don’t completely understand how even that simple nervous system works. What would you say to that?

That’s really an unfair description of that work. I think most people who study worms pay a lot of attention to that data set. A team of worm experts and I recently published another paper on the worm connectome at eight different developmental stages. And it was transformative. There is more information there than you can possibly wrap into a single paper as a conclusion, but there were a whole bunch of new ideas that came out of comparing the connectomes from one age to another.

Very young larval stage worms have a wiring diagram that has a lot of feedback in it. That is, the animal is, if you will, “thinking” a lot before acting. It is analogous to what children do if their teacher asks, “How much is 5 times 12?” They’re going to have to turn it around in their head if they don’t have the multiplication table memorized. Finally, if they feel they have confidence in an answer, they send a signal to their deltoid muscle and raise their arm in the air and move their biceps and triceps to get the arm swinging back and forth to get the teacher’s attention. A baby worm is sort of the same. You see lots of checking: “Do I have the answer?” and “Do I know what I’m supposed to do?” But as the animal gets older, the feedback becomes less and less evident. It becomes more feed forward: “I know what I have to do, and I just do it.”

Do you think studying smaller animals can lead to insights into the human brain?

I think most people study these smaller animals with the hope that the lessons learned will apply to how the human brain works. But I think we are different from all other animals. Human development is just extraordinarily drawn out, but by the end of our growing up, we are masters of knowledge that we generate through experience.

I’m not even sure the closest relatives we have—non-human primates—are a really good model for us, because even they don’t have anywhere near the dependence on experiential learning that we do. I base this on the notion that the behavioral repertoire of our closest primate relatives has remained relatively unchanged over millennia, whereas I do things my grandparents could not and my own children do things I can’t.

I think there’s hope that sooner or later, we will unlock the mysteries of how experiences become physically incorporated into the wiring diagram of a human brain.

Do you think that connectomics will ever be clinically relevant?

I think there are diseases that are probably pathologies of connections. These “connectopathies” may be miswiring at the level of the synapses. The brain doesn’t make the right number of synapses, or neurons are connecting to excitatory cells when they should be connecting to inhibitory cells. I would assert that most psychiatric and developmental disorders of brain function remain mysterious because what is wrong with the brain cannot be seen with traditional techniques. And so one possibility is that, when we have a better way of looking at the fine structure of the connectivity, maybe we will see what’s wrong.

This article originally appeared in Knowable Magazine, an independent journalistic endeavor from Annual Reviews. Sign up for the newsletter.