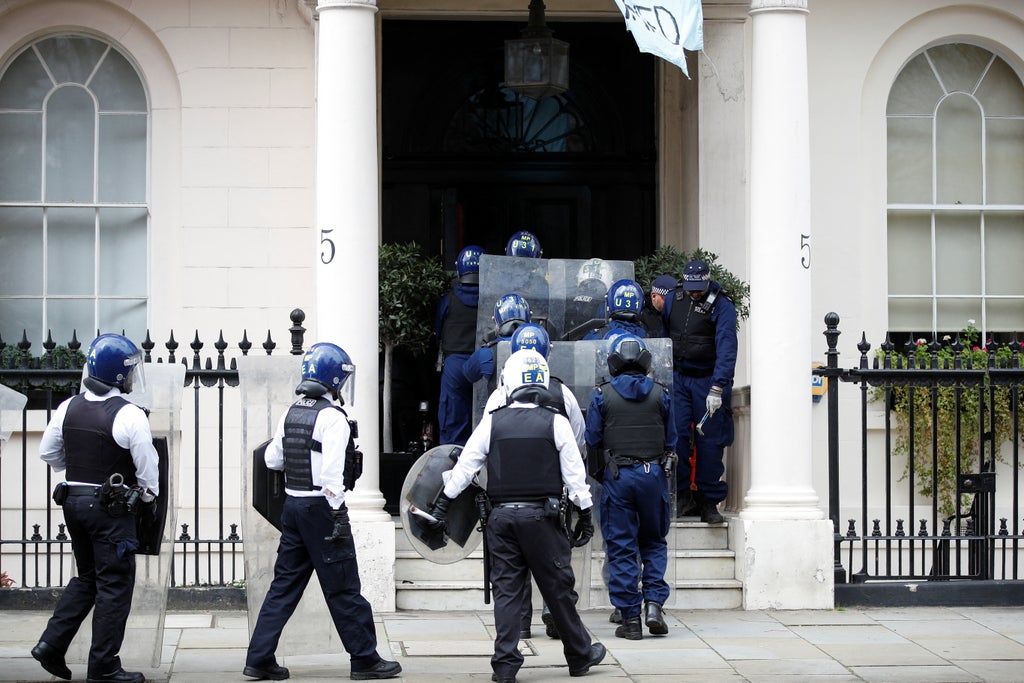 The Met has been criticised for the way it handled the removal of four squatters who took over an empty Belgravia home belonging to billionaire Oleg Deripaska on March 14.

The operation cost the force more than £81,000 and on Tuesday was slammed as a “spectacular waste of taxpayers’ money”.

Protesters broke into the property in Belgrave Square at around 1am and declared that it “belonged to Ukrainian refugees”.

Police sent one inspector, five sergeants and 75 officers as an initial response to the break in, according to a Freedom of Information response published on the Met Police’s online discloser log.

Police brought in a JCB

Later, two superintendents, three inspectors, 13 police sergeants and 77 police constables were mobilised in response to the anarchists refusing to leave the mansion.

Liberal Democrat Assembly Member Caroline Pidgeon said on Tuesday it was “truly incredible” that so many officers allocated to a “task involving no immediate risk to public safety”.

She told the Standard: “This is a spectacular waste of taxpayers’ money. When we have police stations being closed and a crisis in confidence in the Met this excessive and expensive police operation to remove just four protesters will infuriate Londoners.

“This may have been an ineffective PR stunt by protestors, but the police’s heavy-handed  response once again shows a service that is too often out of touch with the priorities of most Londoners.”

The protest group, who called themselves the London Makhnovists, after Ukrainian anarchist revolutionary  Nestor Makhno, hung a Ukraine flag on the property alongside two signs which read “This property has been liberated” and “Putin go f*** yourself”.

Officers wearing riot gear used a drill to break open the front door and the force deployed a JCB to bring the protesters down from a balcony they had stationed themselves on.

Four people were arrested and released under investigation. No one has been charged.

Leading industrialist Mr Deripaska is worth an estimated £2billion. He was sanctioned by the UK Government in March, alongside his onetime business partner Roman Abramovich, because of his links to the Kremlin.

A Met police spokesman said the majority of the operational costs in removing the protesters from his mansion were the salary of officers involved and would have been incurred whether they were deployed in Belgrave Square or elsewhere in London.

A spokesman added: “Officers did not initially respond to reports of a protest, but to reports of people breaking into a residential property in the early hours of the morning.

“When such a call comes in there is no way of knowing whether a property is occupied or who it is owned by.

“The response was as Londoners would expect when a possible burglary is in progress.

“Having arrived and established the nature of the incident, officers had a duty to remain at the scene, to ensure the safety of those involved, to deal with any offences and to prevent any escalation.

“Protestors were in a precarious position, at height, and it was not initially known whether others were also inside the building.

“A significant number of officers were required due to the size of the property, the need to establish cordons in the vicinity to prevent access by others who may have tried to join the protest and the need to deploy specialist officers trained in working at height. There was also a need to bring in lifting equipment at an additional cost.”