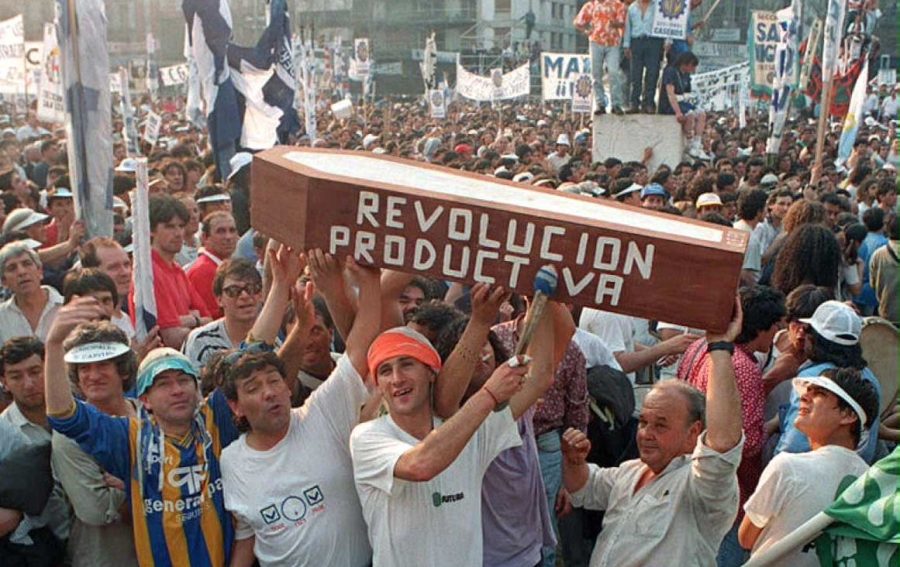 Neoliberalism Was Built on Anti-Worker Repression

For a generation, academics have described a virtuous circle of democracy, free trade, and the empowerment of workers in developing countries. Thatâs simply not what neoliberalism has meant in practice.

Adapted from Opening Up By Cracking Down, published with permission from Cambridge University Press.

SaÃºl Ubaldiniâs Ford Falcon exploded a few minutes before 2 AM on the morning of August 17, 1989. The bomb threw the car several feet into the air and shattered the windows on the first floor of the ConfederaciÃ³n General del Trabajadores (CGT), Argentinaâs main labor union federation. âFor us,â asserted a longtime CGT organizer, âit was the government.â Thirty years later, Ubaldiniâs assistant â the man who parked the car the night it blew up â explained that âSaÃºl knew, and I saw it in his eyes. He knew he was going up against something big, something that wanted to shut him up.â

What Ubaldini, the secretary general of the CGT, was going up against was a set of neoliberal economic reforms proposed by Argentinaâs newly inaugurated president, Carlos Menem.

From 1983 through 1988, Ubaldiniâs CGT launched thirteen general strikes against similar reforms proposed by RaÃºl AlfonsÃ­n, the countryâs previous president. Those strikes paralyzed the economy, stopped the reform process, and destabilized AlfonsÃ­nâs rule, all while establishing the CGT as one of the most important social forces in Argentina. When Menem announced his intentions to open and deregulate the Argentine economy, Ubaldiniâs CGT was the indisputable symbol of resistance.

The battle lines were clear. As one Argentine journalist explained, the Menem administration âwill have to destroy the CGT as a major factor of power if it is to succeed in its aims of setting out new rules for the economic game.â Menem quickly ousted opposition union leaders, broke strikes with the military, and ultimately banned strikes in the public sector before slashing Argentine tariffs by more than 40 percent.

Halfway around the world, a similar dynamic was playing out in India. In the mid-1980s, Prime Minister Rajiv Gandhi announced privatization and trade policy reforms that triggered widespread general strikes from Indiaâs labor unions. Gandhi, like Argentinaâs AlfonsÃ­n, gave in to such labor opposition and gave up on his economic reforms. In the early 1990s, Indiaâs newly elected prime minister, Narasimha Rao, would propose a similar package of reforms with his New Economic Policy. Rao, like Argentinaâs Menem, unleashed a campaign of labor repression aimed at squashing labor union protests against his reforms. As Indiaâs the Hindu newspaper explained, âOnce labour becomes seriously aroused, it becomes necessary to resort to repression if the reforms are not to be abandoned.â

Instead of car bombs, Indiaâs labor unions faced the explosive use of what the Indian government calls âpreventive arrests.â On June 16, 1992, over ten million Indians joined a nationwide general strike in opposition to Raoâs reforms. But before the first strikers could even enter the streets of New Delhi and Calcutta, twenty-five thousand union members had already been arrested and imprisoned throughout the country.

In short, developing countries with democratic governments repeatedly opened their economies while cracking down on labor unions.

The governmentâs basic strategy, coordinated between the central government and state-level chief ministers aligned with Raoâs Congress Party, was to prevent union members from picketing, disrupting public transportation and spreading the general strike. In the southern state of Tamil Nadu, four thousand union members were held in a crowded prison and beaten by guards with batons. At least one union member died while in police lockup. Union leaders immediately denounced âthe unprecedented repression by the state government.â

Four days after the general strike, with the immediate threat of labor opposition overcome, all imprisoned union members were released without any charges. When unions launched another general strike ten months later, the Indian government again preventively arrested more than ten thousand union members in an attempt to make sure that turnout for this general strike was lower than the previous one â a downward trend they would highlight as evidence that there was growing consensus in favor of their economic reforms. Unlike Gandhi, whose reforms were stalled by union opposition, Rao used preventive arrests to limit the scale of general strikes before lowering Indiaâs tariffs by more than 50 percent.

These stories illustrate broader themes about the politics of free trade not just in Argentina and India, but in developing countries around the world at the end of the twentieth century. I analyzed data from across the Global South and found that the transition to democracy was only associated with trade liberalization when respect for labor rights was low. And in established democracies, tariff reductions were often preceded by increases in labor repression. In short, developing countries with democratic governments repeatedly opened their economies while cracking down on labor unions.

Some democratic governments brazenly jailed union leaders and used police and military violence to break the strikes that unions launched against neoliberal economic reform packages. Others weakened labor union opposition through subtler tactics, such as restricting workersâ rights to organize, banning strikes, or threatening to retaliate against striking workers.

This story places labor repression at the heart of the history of international trade in developing countries, and suggests that scholars must think differently to understand the tensions and trade-offs between democracy, labor rights, and free trade. In doing so, it challenges two popular myths about globalization.

The first myth is that democracy, on its own, was a sufficient condition for trade liberalization. This approach often starts with the HeckscherâOhlin model of international trade to predict that workers in developing countries, who constitute the majority of the population, overwhelmingly support trade liberalization. It then uses the median voter theorem to predict that democratic governments lower tariffs in response to the pro-trade demands of the average worker.

This approach precludes labor union opposition to trade liberalization, cannot explain why many developing countries maintained high tariffs after transitioning to democracy, and fails to recognize that democracies that repressed labor unions were the most likely to embrace free trade.

The second myth is that democracies do not use labor repression to reduce labor unionsâ policy influence.

This approach can be traced back to the 1980s, when scholars used a false dichotomy to theorize about why many authoritarian regimes were opening their economies more rapidly than democracies. According to this perspective, dictatorships like Augusto Pinochetâs Chile could use labor repression to overcome labor union opposition, while democratic governments like AlfonsÃ­nâs Argentina were precluded from violating basic labor rights. When democratic governments later began to lower their tariffs, many scholars implicitly used this framework to search for the non-repressive tactics that democracies used to overcome union opposition.

Many argued that democracies used welfare compensation â unemployment insurance, job retraining programs â to overcome opposition from groups harmed by free trade. Others argued that economic crises weakened the ability of unions to mobilize workers, or that partisan ties between unions and political parties led unions to acquiesce to reforms. While these non-repressive tactics often played important roles, a generation of scholarship has remained unjustifiably silent on the many ways democratic developing countries routinely used labor repression to overcome labor union opposition to trade liberalization.

Mainstream political economists often argue that most workers in developing countries benefit from free trade. As Paul Krugman once claimed, âWhile fat-cat capitalists might benefit from globalization, the biggest beneficiaries are, yes, Third World workers.â These claims support a worldview without trade-offs, a vision in which democracy led to free trade, and free trade led to the alleviation of poverty. However, the latest research suggests that only a small group of âsuperstarâ firms reap the benefits of globalization.

Are democracies justified in using labor repression to liberalize trade policy if only a minority of the country benefits from free trade? Answering this question requires that we also consider the broader negative consequences of labor repression. Independent of international trade, labor repression weakens labor unions and therefore lowers workersâ wages, increases income inequality, and weakens demands for welfare spending. The decline of labor unions may even be a proximate cause of the erosion and decline of democracy around the globe.

A virtuous circle of democracy, free trade, and the empowerment of workers in developing countries makes for a great story. Itâs just not what actually happened.

My new book tells a different story, one more focused on the labor unions that opposed trade liberalization and the ways democratic governments frequently used labor repression to weaken protests and break strikes. Many of these tales, such as the preventive arrest of tens of thousands of union members in India or the bomb that blew up CGT secretary general Ubaldiniâs car in Argentina, are conspicuously absent from conventional histories of economic reform at the turn of the twenty-first century.

I hope that these revisionist histories improve our understanding of trade liberalization by conveying more of what really happened in democratic developing countries. Building a global economy of democracies that respect labor rights will require, at the very least, an honest reckoning with the labor repression that facilitated the last wave of globalization.