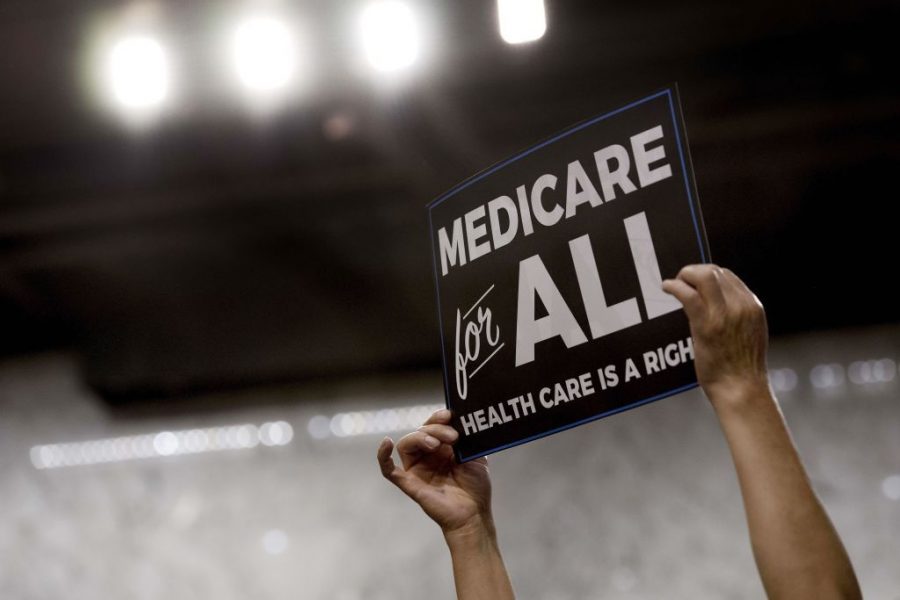 New Study: Medicare for All Would Have Prevented 340,000 COVID Deaths in the US

A new report finds that Medicare for All would have saved one-third of the one million lives lost to COVID in the US. That’s 340,000 deaths at the hands of our for-profit health system — all to make the private insurance companies even richer.

What has long been speculated by the Left is now a quantifiable fact: the United States’ privatized and patchwork system of health insurance — which leaves millions uninsured or underinsured — has directly resulted in hundreds of thousands of unnecessary deaths during the pandemic. According to a new report, a shocking 338,000 of the United States’ one million reported COVID deaths could have been avoided if we had a Medicare for All system.

The study, published this month in the Proceedings of the National Academy of Sciences of the United States of America (PNAS), lists a few key reasons for the lower death rate under Medicare for All, including reduced transmission, higher vaccination rates, and more hospital capacity.

For starters, researchers found that Medicare for All would have lowered the level of COVID comorbidities such as hypertension, obesity, and diabetes. All these underlying conditions are less prevalent among insured people, whose access to care makes them more likely to be aware of their conditions and more likely to have them under control.

Second, having Medicare for All in place would have meant fewer people skipping care due to cost. In 2019, before the pandemic, a staggering twenty-eight million adults were uninsured, and millions more underinsured (burdened by co-pays and deductibles they simply couldn’t afford). Thanks to the United States’ employer-based insurance system, an additional fourteen million people were thrown off their insurance plans as the pandemic started and businesses shut down. And while the federal government offered financial assistance during the pandemic, eligibility was narrowly limited to COVID treatment for uninsured patients.

When people can’t afford health care, they don’t seek it out — putting themselves (and in the case of COVID, everyone else) at higher risk of death. Fourteen percent of US residents who had COVID symptoms at the beginning of the pandemic reported forgoing care due to cost, slowing down the health system’s ability to diagnose, treat, and isolate patients.

Third, access to care in rural areas was hindered by underfunded hospitals that rely on low rates paid by Medicaid and often must care for patients without any compensation. According to the PNAS study, “rural hospitals were more prone to shortages of ventilators, personal protective equipment, ICU capacity, and healthcare workers.” Higher Medicare reimbursement rates, in addition to provisions in the Medicare for All 2021 bill that tackle geographic inequalities, would have significantly reversed this.

The PNAS study further argues that vaccine hesitancy would have been lower if more people were able to go to a trusted primary care provider, and that fewer non-COVID procedures would have been delayed if hospitals weren’t so overwhelmed by hospitalizations.

And if all of this wasn’t enough — the hundreds of thousands of lives saved, the reduction in jarring inequalities, the untold amounts of heartbreak and stress and grief averted — the PNAS study goes on to estimate that Medicare for All would have saved over $105 billion in COVID-related medical expenses (in addition to the hundreds of billions it would save annually). Savings would have come from more efficient investment in preventative care, lower administrative overhead, and stronger negotiating power for purchasing drugs and equipment.

In short: hundreds of thousands of fewer deaths, at a far lower price tag.

This important report should put to bed any illusions about the merits of our current system. The study’s lead author, Alison Galvani — director of the Center for Infectious Disease Modeling and Analysis at the Yale School of Public Health — puts it bluntly: “Americans are needlessly losing lives and money.”

The United States is the only country in the industrialized world that doesn’t provide universal health care, despite being the wealthiest nation on earth. We spend more on health care than any other country, with worse health results. Our COVID death rate has dramatically exceeded that of every other comparable country.

As the PNAS report shows, the pandemic’s unfathomably deadly toll was not a purely natural disaster — it was in part a product of our profit-driven health system. Unless we want to continue being had by private insurance companies, transferring wealth year after year as lives are needlessly lost, it’s time to replace the for-profit health system with Medicare for All.