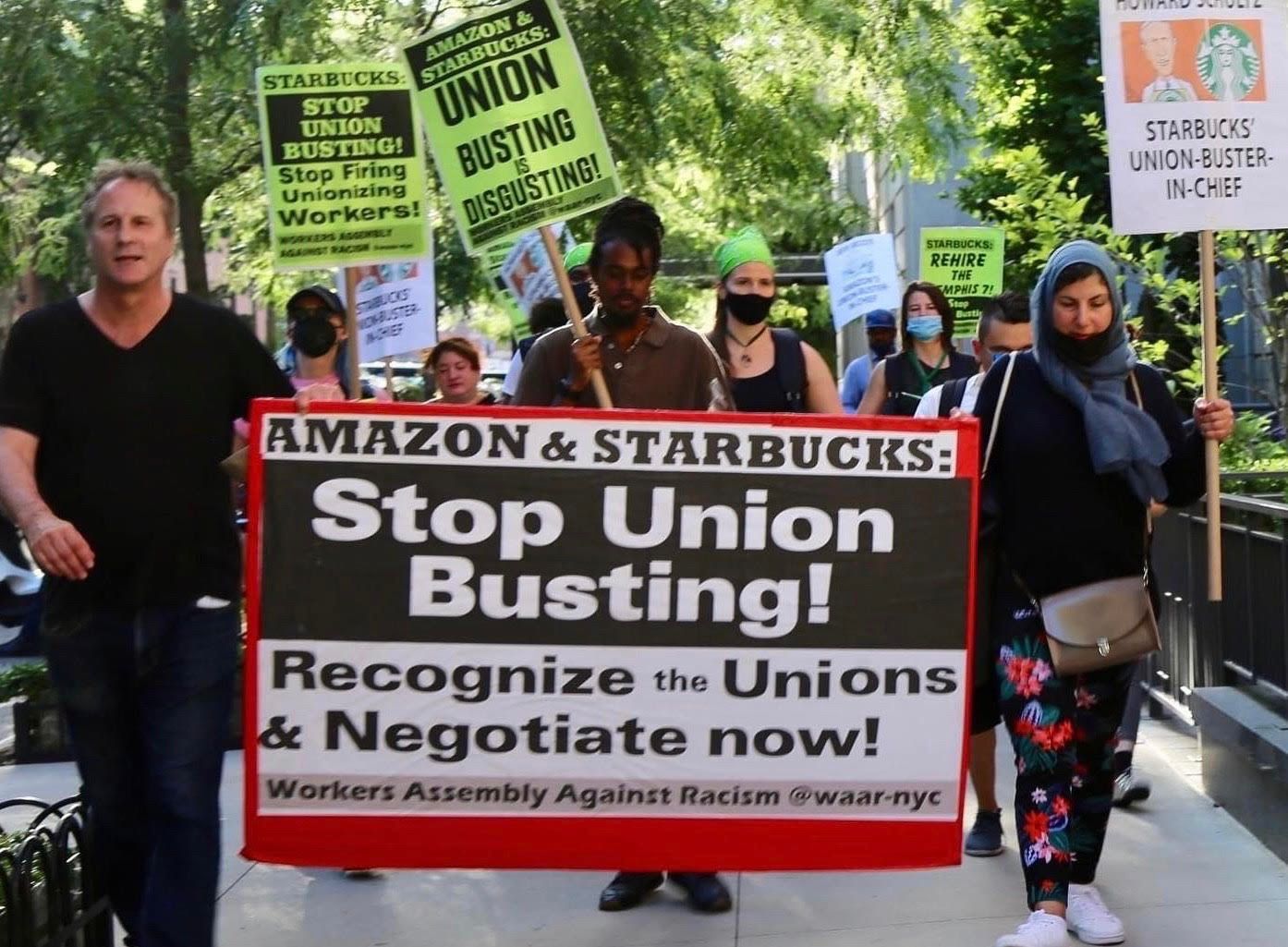 The June 7 Starbucks union win in Memphis, Tennessee, showed that the bosses’ tried-and-true, union-busting tactics aren’t working like they used to. In the face of the February racist firing of the Memphis 7, election tampering by the bosses and constant anti-union interference, workers at that store still voted 11-3 for the union. 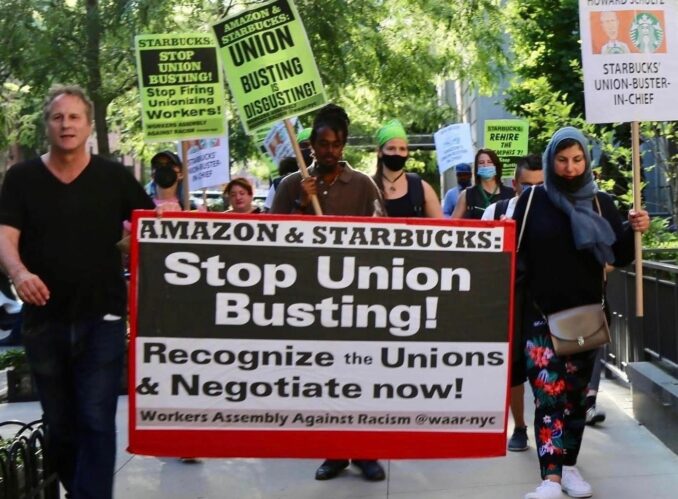 Workers’ victories at Starbucks, Amazon and other workplaces are happening in the face of anti-union retaliation campaigns, with more firings and cuts in workers’ hours and benefits.

That’s why activists with Workers Assembly Against Racism (WAAR) hit the streets June 9 with a ‘March on Union-Busting Billionaires.’ The raucous, militant protest — accompanied by the steady, pro-worker beat of the Rude Mechanical Orchestra — started at the penthouse of Starbucks CEO Howard Schultz and ended at the luxury apartments of Amazon boss Jeff Bezos. 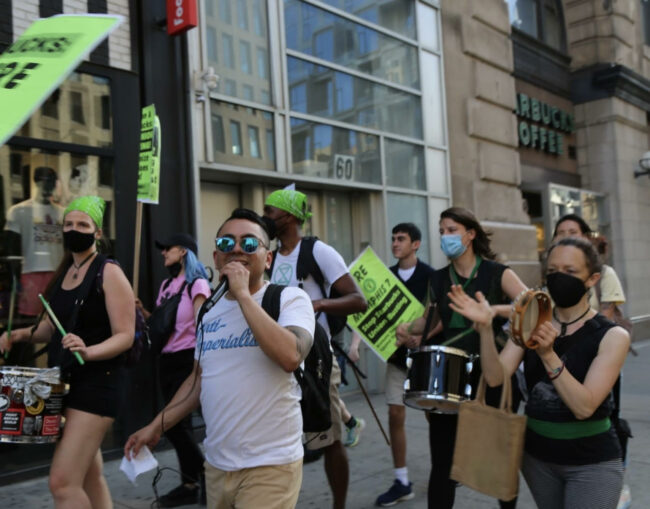 June 9 was chosen because that was the day a federal judge began hearing the National Labor Relations Board suit demanding the reinstatement of the Memphis 7. Just the day before, an Arizona federal judge rejected the reinstatement of three Arizona Starbucks union supporters. What the NLRB can do for workers is limited; WAAR activists wanted to make sure that in the broad fight against union-busting, on the workers’ side is not just NLRB lawyers in the courtroom but protesters on the bosses’ doorsteps.

The need for mass solidarity protests goes for Amazon workers too. And June 9 wound up being the day Amazon’s Staten Island management fired Pasquale “Uncle Pat” Cioffi, one of the Amazon Labor Union’s (ALU) fiercest supporters.

At the rally, Tristan “Lion” Dutchin — also fired by Amazon for unionizing — told the crowd, “Amazon’s day is coming when they’ll finally be exposed, so we can save other workers, and no one else can be wrongfully terminated. Even though I’m fired, I may not be there to organize right now as [ALU leaders] are inside the building, but I’m always there to support the union, attend rallies and fight the fight!”

Amazon has been illegally firing unionizing workers in Chicago, New York and Ohio, calling the police on them in Kentucky and New York and retaliating in other ways in New York and Pennsylvania.

The Amazon boss’s penthouse was a rally target to protest the firings suffered by Amazon workers — and to support the ALU as Amazon’s bosses dragged its New York leaders across the country for a farcical NLRB hearing in Arizona. The company’s union-busting lawyers have trumped up 25 bogus charges aimed at forcing a revote of the historic Staten Island victory election.

ALU’s lawyers have had to fight Amazon’s lawyers just to keep the NLRB proceedings public, though all such hearings normally are. “The only thing that Amazon would accomplish by closing this hearing is to hide from the world how absurd, frivolous and bereft of evidence their 25 objections actually are,” the union wrote. 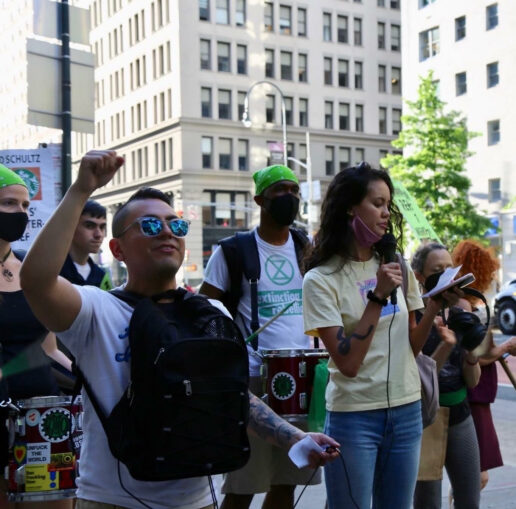 The rally at Schultz’s penthouse featured speakers and solidarity from other New York City workers’ struggles, including Mahoma Lopez from the Laundry Workers Center and Brenda Stokely, former president of AFSCME District Council 1707 and a leader with the Million Worker March Movement.

WAAR leader Larry Holmes pointed out that the Starbucks boss’s $40-billion penthouse was formerly the site of St. Vincent’s Hospital, once the epicenter of New York City’s AIDS epidemic and an HIV center for the community. It was shut down in 2010 and is now a luxury residence for the ultrarich.

Along with Bezos and other CEOs, Schultz has earned his new identity as a billionaire union-buster after years of crafting the image of a caring liberal. The day after the protest at his luxury Manhattan digs, he answered the question from a New York Times reporter — “Can Starbucks ever embrace the union?” — with one word: “No.”

Observers pointed out that this answer is a violation of the National Labor Relations Act, since management is required to negotiate with unions in good faith. As of this writing, more than 130 Starbucks stores have voted to unionize.

In response to Schultz, Beto Sanchez, a leader of the Memphis 7, told Workers World: “An unfair labor practice charge has already been filed from that interview. Starbucks will always promise this or that or say that they will bargain in good faith, but Howard went up and said exactly how he felt — which is no surprise to us at Starbucks Workers United, having already dealt with them during bargaining calls.”

WAAR activist Alex Paczka, speaking in front of Schultz’s front door, summed up the spirit of the protest: “This isn’t a problem of one individual; Howard Schultz is a jerk, but he’s not the problem. The system is the sickness. We’re not fighting against one person. The capitalist system is represented by people like Howard Schultz and Jeff Bezos.”