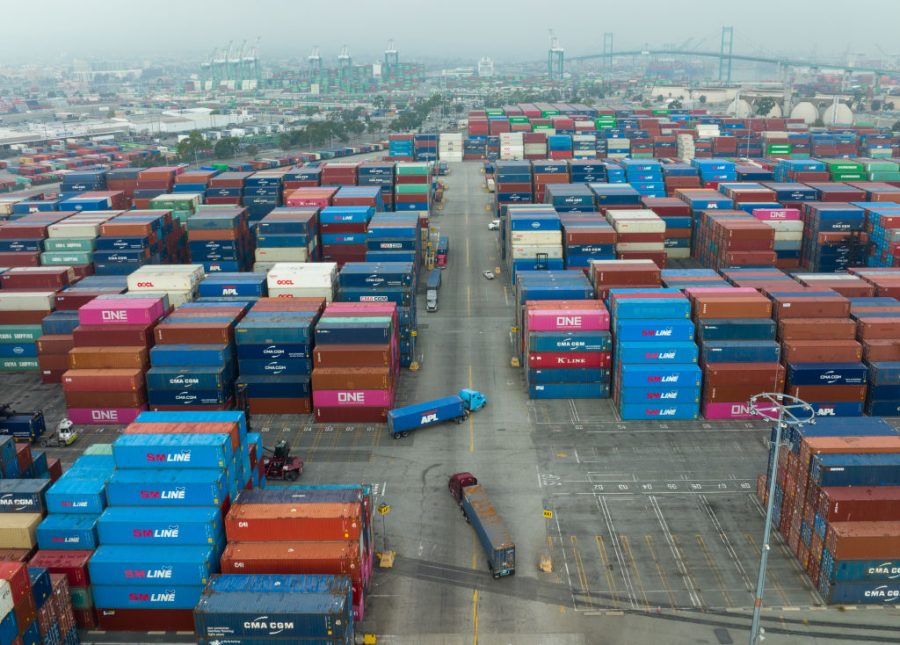 Logistics companies are reportedly engaged in illegal union busting at the LA and Long Beach ports — including by misclassifying employees as independent contractors. The NLRB wants the employers to reclassify drivers and compensate them for lost income.

The National Labor Relations Board (NLRB) has started prosecuting a case against several trucking companies that operate out of the ports of Los Angeles and Long Beach for misclassifying port truckers as well as threatening and interrogating said drivers about their organizing with the International Brotherhood of Teamsters.

A complaint issued by Region Twenty-one of the NLRB on March 17 alleges that Container Connection and several companies affiliated with Universal Logistics Holdings, Inc. (ULH), a Michigan-based transportation and logistics company, misclassified hundreds of port truckers.

“Since at least August 5, 2020, Respondents have informed misclassified employee-drivers that they are independent contractors, thereby inhibiting them from engaging in Section 7 activity and giving them the impression that they lacked the protections of the Act,” wrote NLRB regional director William B. Cowen in the consolidated complaint.

The incidents were part of a campaign by ULH and its affiliates to discourage driver organizing. The company is one front in the Teamsters’ years-long campaign to organize truckers who operate out of the West Coast ports, and it is not the first time Container Connection has been found to have misclassified its workforce.

The complaint alleges that in addition to misclassification, ULH inhibited drivers from organizing by threatening workers as well as interrogating them about their union activity. Additionally, the complaint alleges that ULH/Container Connection did not allow several drivers to return to work after taking medical leave, effectively firing them, because of their support for the union.

The case, which has been set a trial date of June 13, 2022, could make misclassification an unfair labor practice (ULP). Given the so-called gig economy’s reliance on classifying workers as independent contractors, a method that allows companies to deprive their workforce of basic rights and protections such as minimum wage laws, workers’ compensation, and paid sick leave, the issue is pressing. Currently, misclassification is not a standalone ULP thanks to the precedent set in Velox Express, Inc., a 2019 ruling by the Donald Trump–era board.

Some of the most egregious labor practices one can find in the United States are rife in the port-trucker industry, with illegal forced overtime rampant and truck-leasing programs sometimes leaving truckers indentured to their employers, with paychecks showing negative balances.

“Wage theft, unsafe working conditions and the fear that comes from not having a safety net — this is the reality for thousands of port truckers like us,” David Averruz, a port truck driver for Container Connection who the complaint alleges was unlawfully terminated in retaliation for his union activities, said in a statement:

I’m glad the NLRB has finally taken up this issue and recognized that ULH and Container Connection broke the law. But, I also know that there’s so much more to be done to win justice for me and my coworkers. We need our basic rights respected, and we’ll keep fighting until we win.

The NLRB seeks not only that the employer reinstate drivers and compensate them with back pay, but also that it both reclassify its drivers and pay them any income lost as a result of the misclassification.

“With this powerful complaint, the NLRB has put real teeth into our country’s foundational labor laws and put ULH on notice that no company, no matter how big or powerful, is above the law,” Eric Tate, secretary-treasurer of Teamsters Local 848, said in a statement. “If ULH doesn’t change its ways, it will be ordered to reclassify its workforce of purported independent contractors and pay millions of dollars to its hundreds of misclassified workers.”