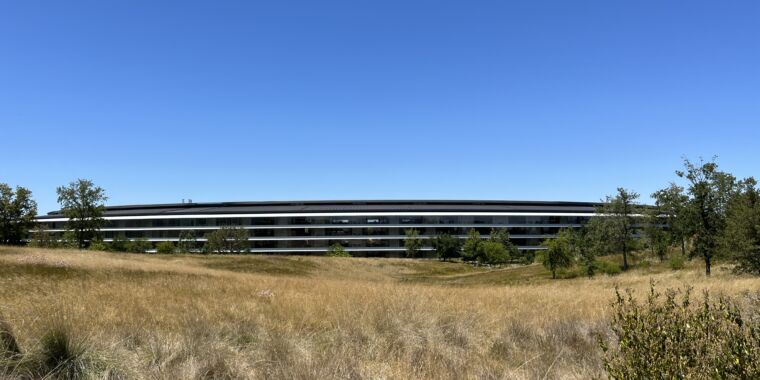 Once again, Apple calls workers back to the office—once again, workers fight back

Apple has asked its employees to spend more time in the office as pandemic restrictions continue to loosen, but it has again been met with organized resistance and an internal petition advocating for more time working from home, according to a report in the Financial Times.

A week ago, Apple once again announced a deadline by which its corporate employees should return to the office at least three days a week. This time, the date is September 5. Beginning with that day, the company will require its employees to work onsite on Tuesdays and Thursdays, as well as one additional weekday that will be decided on a team-by-team basis.

This was not the first time Apple made such an announcement—though the previous attempt mandated Tuesdays, Wednesdays, and Thursdays instead of offering one team-dependent flex day—but the company’s leadership has repeatedly had to postpone the shift in light of new developments in the pandemic since first announcing a three-day plan back in June of 2021.

Presently, many Apple employees are going into the office two days a week, not three.

The new mandate comes at a time when the CDC and other organizations have recently reduced their COVID-19 safety recommendations regarding behaviors like sheltering in place after potential exposure to the virus, mask-wearing, or social distancing. Cases of the virus in most of the metropolitan areas where Apple has large offices are relatively low, though not always lower than they were before the omicron variant’s initial surge earlier this year.

But some of the company’s employees have formed an internal advocacy group called “Apple Together” to push back against further return-to-office plans. An internal petition circulated for signatures by the group on Sunday and seen by the Financial Times claims that Apple’s workers are “happier and more productive” working from home and that a “uniform mandate from senior leadership” ignores “compelling reasons” why many employees should be able to continue to work from home more than three days a week or on the days they deem most appropriate.

Instead of demanding a blanket work-from-home policy, though, the employee group instead advocates a system whereby individual employees would be able to talk with their direct managers to decide expectations on a case-by-case basis, without “high-level approvals” or “complex procedures” making things more restrictive.

The petition has not yet been formally sent to Apple’s senior leadership, as it is still collecting signatures from employees.

Fighting the tides of change in tech

While it has not been as aggressive about bringing employees back into offices as some traditional, non-tech corporations in the more conservative parts of the United States, Apple has pursued a return to the old normal more vigorously than many of its American peers in tech.

For example, Ars has been told that Microsoft allows exactly what Apple’s employees are asking for, in that individual team managers are able to set their own policies in lieu of a top-down, company-wide policy. Some Microsoft corporate jobs require pre-pandemic levels of onsite work, others permit fully remote work, and others still strike some hybrid balance between the two extremes.

Microsoft’s no-size-fits-all approach is more or less typical of major American tech companies at this time, but some others like Twitter have taken an even more liberal approach and mandated full-time remote work and location-agnostic options for most employees from the top.

But Apple CEO Tim Cook has said that on-the-fly chance encounters and discussions within a physical workplace are essential to Apple’s company culture and part of its secret sauce for success. That philosophy underpinned Steve Jobs and Jony Ive’s plans for the circular Apple Park headquarters in Cupertino, California, which opened in April of 2017.

Countering that, Apple employees have previously claimed that with teams split between multiple office sites in Northern California as well as in other places like San Diego, Austin, and Culver City (a municipality within the Los Angeles metro), that sort of serendipitous work is already not possible.

Apple opened some of these additional offices to more easily poach talent from competitors in businesses Apple plans to expand into without the deterrent of requiring those new hires to relocate to the Bay Area and leave behind their lives. For example, the San Diego office is where it is in part because it improves the company’s prospects for attracting talent from rival Qualcomm.

But Apple leadership’s resistance to more flexible remote-work policies may run counter to the company’s goals around attracting and retaining talent in competitive fields. To that point, a notable machine learning director named Ian Goodfellow left Apple for Alphabet subsidiary DeepMind and named remote work policy as a reason for his departure.