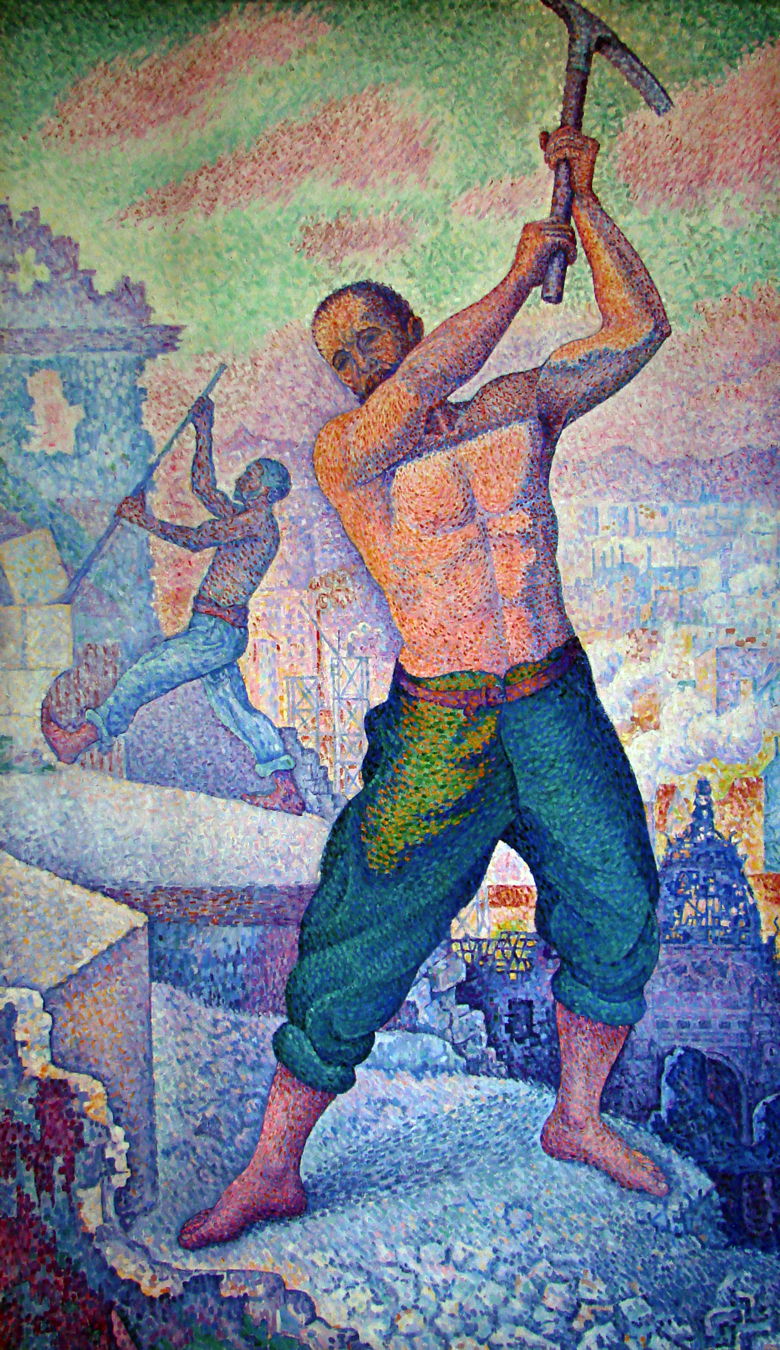 In the first of these two articles providing a short survey of some of the major paintings of Paul Signac (1863-1935), with links to each detailed article in this series, I had reached 1895, when he had become the lead Neo-Impressionist, following the death of Georges Seurat in 1891.

Signac’s major work over the period immediately before the new century was The Demolisher or The Wrecker, first conceived in 1896, when he made a lithograph of his initial composition. It’s rooted in his anarchism, and generally read as the worker demolishing the capitalist state. Originally intended as the first of a series with the overall theme of labour, it took him two years to complete, and he never started work on any of its projected companions. This painting wasn’t exhibited until 1901, and it remained in his studio until after the artist’s death more than thirty years later.

Although Signac started work on this view of the port of Saint-Tropez in 1901, he didn’t complete it until early the following year. At its centre is the town’s distinctive bell tower, and the citadel looks down from its upper right. Its sailing vessels, known as Tartans, are being loaded with their cargo of barrels. Its Divisionist technique and colours are thoroughly contemporary, but it harks back to a tradition of port views by Claude Lorrain and Joseph Vernet.

For Signac, Venice must have been the ideal location for painting, with its combination of waterways, a range of watercraft, and rich architecture.

Among the finest of his views of Venice is the Entrance to the Grand Canal, Venice (1905). The foreground is dominated by a shimmering and jumbled parade of gondolas, and melting into the distance is the towering silhouette of Santa Maria della Salute.

In late 1905, Signac used a similar approach on two views of the port of Marseilles. Starting with watercolour studies made in front of the motif, he developed those in his studio in Saint-Tropez, probably completing this finished oil painting in early 1906. His view from the docks of the old, and ancient, port looks towards the exaggerated limestone hill on top of which is the seafarers’ church of Notre-Dame-de-la-Garde, the ‘good mother’.

Signac repeated this process when he visited Rotterdam and Amsterdam.

His finished painting of Steamboats, Rotterdam (1906) is remarkable in retaining the sense of activity, motion and constant change in a technique notorious for its painstaking slowness. At the time this was compared with Monet’s series of the River Thames in London, and refers back to Signac’s early fascination in the industrial uses of rivers.

This is the only accessible finished painting from Signac’s visit to the part of Istanbul known as The Golden Horn, from 1907. Using the same compositional technique that had proved so successful in his views of Venice, this shows the Süleymaniye Mosque on the Third Hill from the north-west, on the western (European) side of the Bosphorus Strait. In the foreground are brightly coloured rowing boats taking part in what looks like a regatta, and a row of sailing ships on moorings, all in the waters of the Golden Horn. The mosque is relatively desaturated as it dissolves into the distant pink and gold sky.

Signac’s Avignon, Evening (The Papal Palace) from 1909 is one of several works that year showing grand architecture from the water. Critical reception was disappointingly mixed, though.

Signac found the years of the Great War very difficult, and suffered from depression, which greatly reduced his painting output. However, he had recently seen the late watercolours of Paul Cézanne, and started to transform the watercolour sketches he made in preparation for oil paintings into art in their own right.

This view of Saint Julien-Beauchene (1914) shows the almost unpopulated commune of Saint-Julien-en-Beauchêne in the French Alps, which he visited during his holiday with his partner Jeanne Selmersheim-Desgrange and their young daughter just at the outbreak of the First World War. He doesn’t appear to have used this in any subsequent oil painting. Like Cézanne before him, Signac incorporated reserved (white) space in this distinctive style resembling a sketch with colour notes.

After the war, he resumed oil paintings, but innovated most in his watercolours.

When Signac painted away from the coast, he usually managed to find a river, in this View of Montauban in the Rain from about 1922, the River Tarn.

This undated watercolour of the Pont de la Feuillée in Lyon shows a major bridge over the River Saône in the centre of the French city of Lyon.

Signac’s last major artistic project was a large series of watercolours of the ports of France, completed between 1929 and 1931.

When that series was complete, he returned to The Old Port of Marseille in 1931, for a different view from those he had painted earlier of the main harbour and the church of La Bonne-Mère.

12 Pointillism shows a study of the evolution of his technique in oil paintings, and 16 Cézanne’s influence compares Signac’s late watercolours with those of Cézanne.

It’s all too easy to gloss over Signac’s paintings and their significance to the development of art following Impressionism. I hope this series has not only shown their importance, but how wonderful many of his paintings are. Neo-Impressionism wasn’t a failed attempt to merge modern colour theory with art, but a significant movement in its own right.