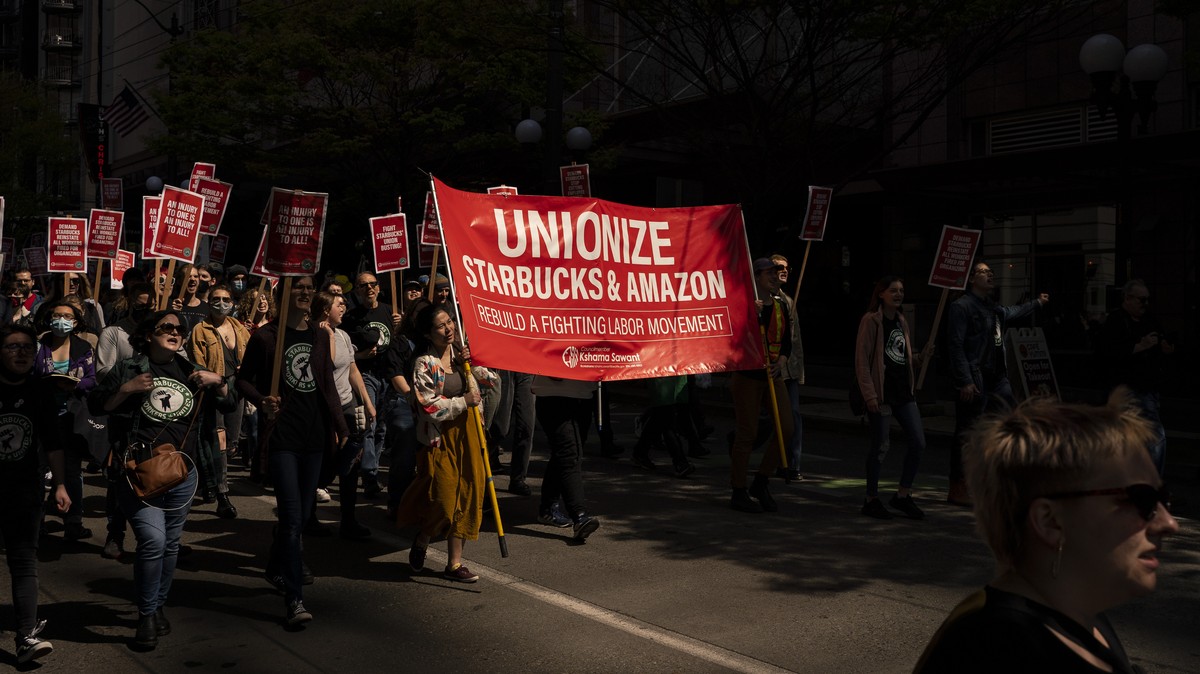 On the Clock is Motherboard’s reporting on the organized labor movement, gig work, automation, and the future of work.

Job listings seem like an unlikely space for political activity. But with a wave of strikes last fall and thousands of workers at Starbucks, Apple, and Amazon unionizing for the first time this year, online job listings and the application process associated with it have evolved into a powerful tool that labor and tech activists are using to effectively sabotage and expose the efforts of companies that union-bust and mistreat their workers.

In a TikTok video from February, Gen-Z For Change coder Sofia Ongele says, “Let’s talk about Starbucks. In case you missed it, they’ve fired seven of their Memphis workers who are trying to unionize. They even took it upon themselves to launch an entire anti-union website. But unions are good. They protect workers,” she says, before mentioning Change Is Brewing, “a supercool website that my friends and I made that make it easy for you to flood the application pool,” she said, adding that the site auto-generates applications using a Python script. “It’d be a real shame if people used the website and let Starbucks know unionizing is good and they shouldn’t be firing workers who try to unionize, you know, just putting it out there.”

On Wednesday, SEIU Local 32BJ, a New York City-based union that is organizing fast food workers, exposed significant racial discrimination in job hiring for managerial positions at Chipotle Mexican Grills by using a bot to spam job applications and seeing which ones received a response from the company.

Labor experts told Motherboard that they haven’t previously seen efforts by labor activists and organizers to use technology toward these ends before, but noted that this is happening now because of the surge of interest among young, tech-savvy people in joining and supporting unions. The participatory nature of some of these campaigns and the fact that they’ve gone viral on TikTok and Reddit has had the effect not only of derailing employers’ efforts to bust unions, but educating young people about unions and the labor movement along the way.

“I’ve never seen anything quite like these new efforts at Kellogg’s and Starbucks,” said John Logan, a labor studies professor at San Francisco State University who has researched unions for decades. “When it comes to the adoption of technology for organizing or exposing union-busting, organized labor has generally been years behind large anti-union corporations.”

The new methods for exposing anti-union employers arrive during a moment of broad enthusiasm for the US labor movement, particularly among young people. Over the past six months, the National Labor Relations Board has recorded a 60 percent increase in workers filing union elections. A recent Gallup poll showed support for unions at its highest point since 1965, with 68 percent of Americans approving. Approval was highest among young adults between the ages of 18 and 34, at 77 percent.

The story behind the most successful effort to use job applications against employers began last summer when Texas passed a law that made illegal to aid abortion-seekers who were more than six weeks pregnant. At the time, Sean Wiggs, a 21-year-old coder and TikTok influencer from North Carolina wrote a script that spammed a Texas anti-abortion, where people could to report those who violated the new law. In less than two weeks, thousands of people spammed the website and it was taken down.

In December, when Kellogg’s workers went on strike at all Kellogg’s cereal facilities, Wiggs saw an opportunity to tailor his code to Kellogg’s applications for strikebreakers, or so-called jobs. Within days, the movement “exploded” on Reddit, and Kellogg’s shut down the job application portal, Wiggs says.

Since then, Wiggs has joined an organization called Gen-Z For Change, where he and other coders regularly ask their 1.5 million TikTok followers to spam anti-union employers with fake job applications. Earlier this year, as part of their campaign called Change is Brewing, Wiggs wrote a script that has been used to spam Starbucks with more than 140,000 fake job applications for positions at stores where union organizers have been fired and openings for union-buster positions. Postings for Starbucks jobs in Buffalo and Ithaca, New York and Memphis, Tennessee, have since been taken down.

“I was never taught about unions in schools and a lot of young people haven’t been given more than a short lesson, but now they are learning about unions by participating in these actions,” said Elise Joshi, a 19-year old UC Berkeley undergraduate and the operations director of Gen-Z for Change. “They are seeing Gen Z baristas organizing unions and maybe they think ‘I’m working at a restaurant now, maybe I should unionize too.’ Maybe we’re creating a generation of union organizers.”

In March, at a request of the United Food and Commercial Workers union, Gen-Z For Change coders wrote a script and spammed Ralph’s, the Kroger subsidiary in Southern California, with more than 40,000 applications for replacement workers after union workers voted to authorize a strike. The campaign resulted in Ralph’s taking down several job postings, organizers said. “The best work we’ve done is when it comes directly from workers asking for help,” Joshi said.

Unions have also been finding innovative ways to use technology to gather information on anti-union employers. A report published on Wednesday by SEIU Local 32BJ in collaboration with the Equal Rights Center, seems to confirm years of worker complaints that Chipotle discriminates against Black workers when hiring for managerial positions. Chipotle’s own data shows 19 percent of hourly Chipotle workers are Black, while 11 percent of salaried store managers are.

Joshi said that Gen-Z For Change has been inundated with requests for their support on union campaigns. “The only challenge that we deal with is that there isn’t another group of people who are doing this on our level,” she said. “Everyday we’re sent union related actions that we don’t have capacity for. We love the work but we’re just a bunch of teenagers with school to do.”