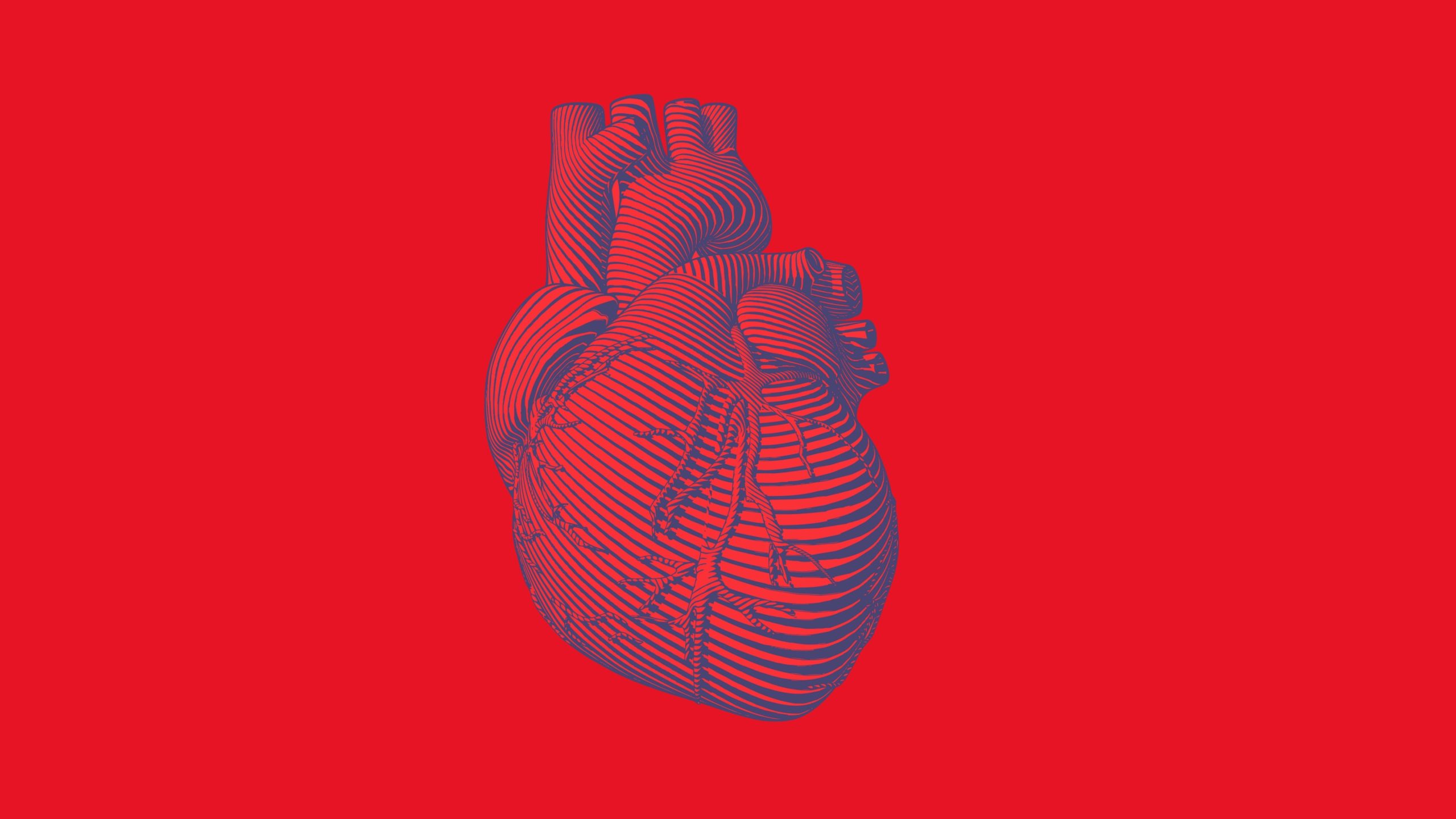 At the beginning of the 1982 movie Blade Runner, a character called Leon is undergoing a tense interview to determine if he is a replicant (a bioengineered humanoid). The viewer knows it’s a tense moment from the way Leon is behaving, but also the addition of a subtle background noise: his heartbeat. As Leon gets more nervous, the sound of his heartbeat matches his anxiety.

The audio of a beating heart is often added in movies to ramp up emotional intensity because our heart rate is connected to our feelings. If your heart is racing, it means that emotions are likely running high.

In real life, however, unless someone is feeling your pulse, your heartbeat is usually a signal that you alone are aware of. A new study in the journal Cortex found this might not always be the case: People were able to guess the owner of a heartbeat just by watching a 10-second video of their face, and could do so at rates significantly better than those that could be attributed to chance.

Given the heart’s relationship to emotional states, it raises intriguing questions in the field of interoception—what the ability to feel your heartbeat, along with other physical sensations in your body, is called. (Interoception is the opposite of receiving and processing signals from the outside world, which is called exteroception.)

By its very definition, interoception is typically thought about in regards to individuals: It covers the physical feelings from your own body. This study reveals an instance when people visually perceive someone else’s interoception—and such a finding could have implications in how we relate to one another, and sense how one another is feeling.

At a basic level, interoception helps our brains keep our bodies alive; it’s how we know we’re cold or that we’re hungry. But those same physical sensations also have complex interactions with our emotions and thoughts.

We use the signals from our body as part of the scaffolding of our emotional states, said James Kilner, a neuroscientist at University College London, and senior author of the new paper. All of our internal signals put together tell us something about what we’re feeling. Our hearts, for instance, are usually very reactive during certain emotional states. This might be why we have a lot of emotional sayings that involve the heart, like “my heart skipped a beat" or "from the bottom of my heart.”

Neuroscientist Sarah Garfinkel studies how the way we sense our heartbeat is related to our mental state, and has found that your heartbeat can influence how you feel and how intensely you feel it. How accurately a person feels their heartbeat, or how accurately they think they feel it, can be associated with different mental health conditions. Misjudging your interoceptive accuracy is associated with anxiety, for example, and interoceptive deficits have been observed in panic disorder, eating disorders, or depression.

Alex Galvez-Pol, first author on the Cortex paper, and a cognitive neuroscientist at the University of the Balearic Islands, said that he and Kilner began to wonder if people could pick up on others’ interoception, given that humans are such social animals. People don’t narrate what they’re feeling every second that you’re with them, so we often have to infer what others’ moods are based on visual cues.

“Maybe [the heartbeat] works more or less as a sort of lighthouse that signals how we feel to others,” Galvez-Pol said.

In the study, 120 participants watched 10-second videos of two people side by side, paired with a visual representation of just one of their heartbeats. Then, they were asked to pick which person they thought matched with the heartbeat. People were able to do so correctly significantly more than might be expected by chance, across repeated experiments.

We use our heartbeat, along with other internal signals, to shape our concepts of emotion. If we have access to the same signal from someone else, is it possible it’s one of the ways we can understand other people’s emotional states?

Manos Tsakiris, a professor of psychology at Royal Holloway University of London, and director of the Center for the Politics of Feelings, said knowing another’s heart rate could play a role in sensing some basic aspects of other people’s emotional states. Call it body reading, rather than mind reading: If we could correctly guess what people are feeling inside their bodies, it’s another clue as to what they’re feeling overall. The current study did not have the people in the videos exhibiting dramatic emotions, but future studies could do so.

Sahib Khalsa, a neuroscientist at the Laureate Institute for Brain Research in Oklahoma who wasn’t involved in the new paper said that while the findings don’t fundamentally change his ideas about interoception, they do offer some early evidence for how such signals might be used to interpret other people’s states.

The authors don’t know exactly how the participants guessed whose heart rate belonged to which person, but found that their ability to do so decreased when a person’s face was altered—like when it was put upside down, or when they were shown a still image instead of a video. It could be that people picked up on subtle visual cues connected to heartbeats, like changes in a person’s facial coloring or the way they moved. People might also be making guesses based on a person’s sex, perceived health or fitness level, or age.

Those associations are interesting, Kilner said—where did they come from, and where did we learn them? It highlights how there’s an intimate connection between what people think is going on in the body and how it relates to a person as a whole.

A preprint paper, published online on March 29, replicated the finding that people can guess another’s heartbeat just by looking at them. The researchers, with first author Irena Arslanova, did an additional measurement: They also looked to see how well people did at assessing their own heart rate, or their interoceptive accuracy. This is often done by asking people to count their own heartbeats without taking their pulse, and then comparing what they felt to a measure of how many times their heart beat.

Tsakiris, senior author on the preprint, said it adds to the growing body of research that shows metacognition, or the critical awareness of one’s skills and abilities, is important. “Independently of whether you are good or bad at something, knowing whether you are good or bad matters,” he said. Thinking that you’re good at something could lead you to make incorrect assumptions , and not second guess them. Knowing you’re bad at something could lead you to be more cautious, and acquire more information before making a judgment.

People with anxiety are more likely to think they’re very good at feeling their bodies, but they’re actually not. “You could think you’re great,” Garfinkel told VICE in 2020. “But when we test you in the lab, your accuracy could be quite poor.” Khalsa has found, and published recently on this in JAMA Psychiatry, that people with generalized anxiety disorder show an association with low interoceptive ability.

Kilner said it makes sense to him that how well you can feel your own internal states is likely to have some influence on how well you can access that information in other people. “It would be very odd if you were rubbish at using your own signals, but then really brilliant at reading other people’s, that would seem sort of counterintuitive.”

When we ask “what’s interoception for,” it might be that it’s both to keep our bodies alive, but also to figure out how other people and the social world makes us feel. Of course, if someone was very scared or enraged, we would probably use other visual cues to figure out their emotional state, rather than try to assess their heartbeat. This is a more subtle cue. Importantly, whether or not this signal is actually tied to inferring emotional states will have to be determined in further experiments, Khalsa said.

For now, the new study shows simply that we can do this, and fascinating questions arise in response to that fact, Kilner said, like how people use this ability, and whether the people who are better at it are also better at recognizing other people’s emotions.

“It would be interesting to know if those individuals who are very good at these sorts of tasks have better social skills, empathy skills, those kinds of things,” Kilner said. “We don’t know if that’s the case, but there’s definitely some people that can do these tasks really, really well.”

And things also get interesting when we consider the moments when we want to hide our emotional states from others. “You might want to be presenting as confident and in fact, you’re nervous,” Kilner said.

There have been times when Kilner said he’s had a funny sense when he meets someone new, that something is not quite right. “I wonder whether it’s because their internal state and what they’re trying to present is at odds with each other,” he said.