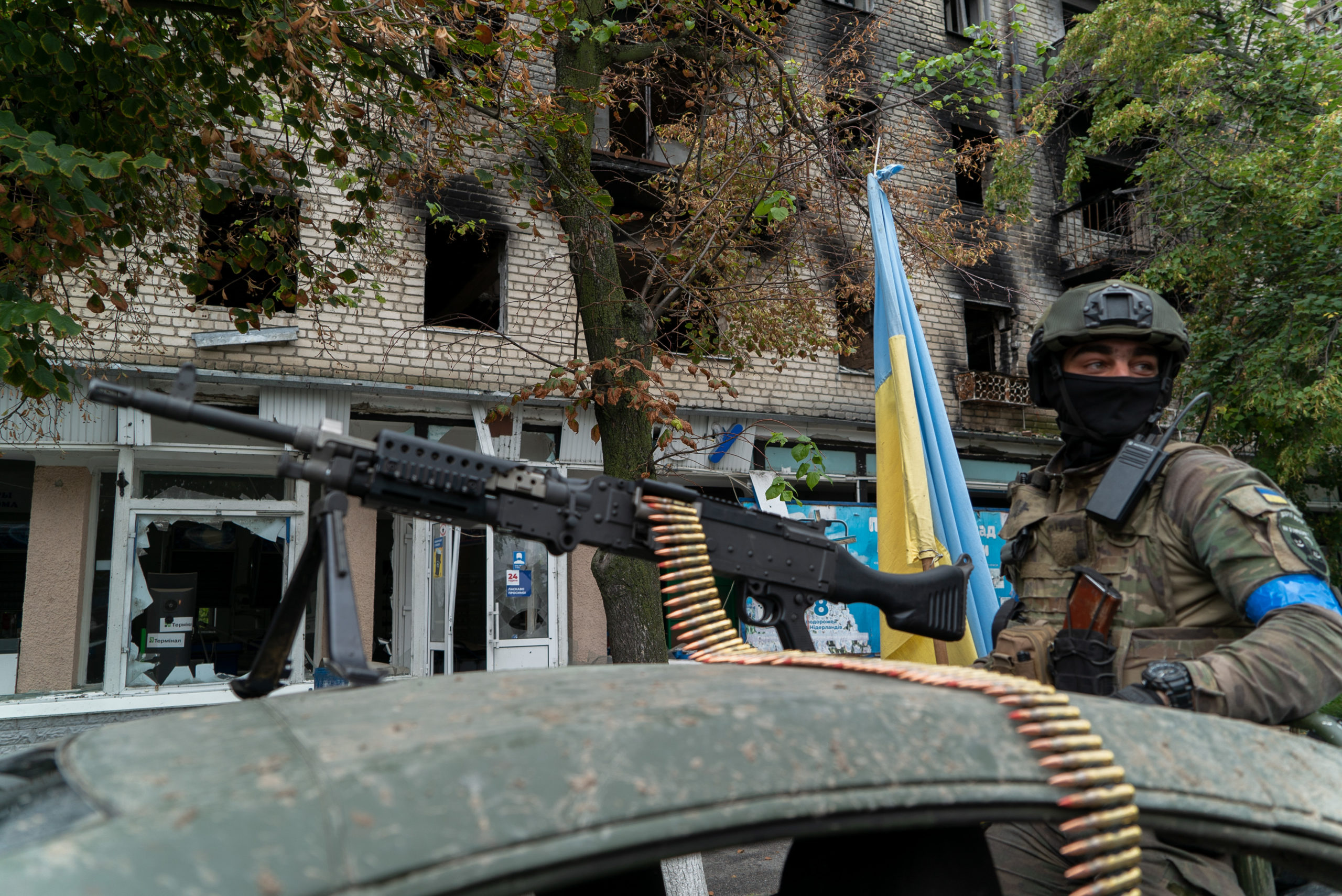 A decentralized volunteer group of hackers who support Ukraine claimed to have hacked the notorious Russian mercenary group Wagner on Monday.

The Ukraine IT Army posted a message on its official Telegram channel, claiming to have stolen the personal data of the group’s mercenaries from one of its websites.

“We have all personal data of mercenaries! Every executioner, murderer and rapist will be severely punished. Revenge is inevitable!” the hacktivist group wrote in the announcement.

In the announcement, the hackers posted a link to an archived version of the alleged Wagner group website, which showed the logo of the IT Army and the message: “All of your personal site data is with us. Welcome to the Ukraine. We are waiting for you 😈,” according to a translation done with Google Translate. The defaced website also included graphic pictures of dead soldiers. 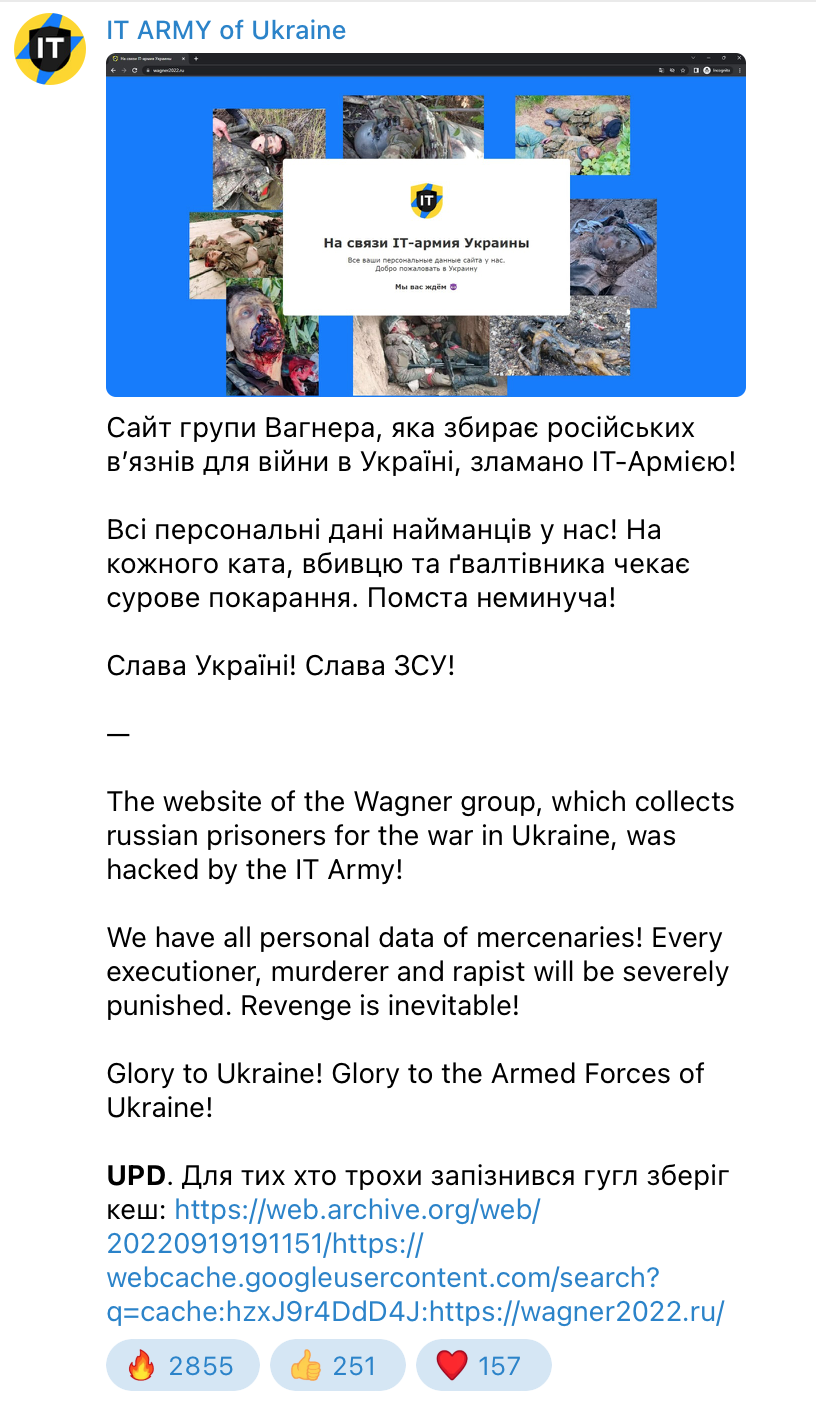 A screenshot of the IT Army’s announcement. (Image: Motherboard)

The hackers did not post any data that would help verify their claims. Motherboard could not independently verify whether the hacktivists stole the personal data of Wagner mercenaries.

The IT Army did not immediately respond to a request for comment, sent to two email addresses associated with the group, which Motherboard previously spoke to.

“Striking the Wagner group and its online presence is a clear indication that Ukraine feels that this is an important target psychologically,” Candace Rondeaux, a professor at the Center on the Future of War at Arizona State University who has studied the Wagner group, told Motherboard in a phone call.

Rondeaux added that the Wagner group has a significant role to play on social media and online in regards to the Russian government’s narrative of the war in Ukraine.

Do you have information about the activities of Ukrainian or Russian hacking groups? We’d love to hear from you. You can contact Lorenzo Franceschi-Bicchierai securely on Signal at +1 917 257 1382, Wickr/Telegram/Wire @lorenzofb, or email lorenzofb@vice.com

The alleged Wagner website used to redirect to a page hosted on VK, a Russian social media site. An archived version of the website included a registration form and contact details for the mercenary group. According to publicly available domain records, the website was created on July 7 of this year.

The Wagner group is a Russian private military contractor that is believed to have links with Kremlin insiders. Since 2014, the group has operated in Russian wars and proxy wars such as the conflict in the Ukrainian region of Donbas, in Syria, and the Central African Republic.

“It’s not a unitary company. It’s not a firm. It’s not a private security company. It is an amalgam of different contingents that clearly are under contract to the Ministry of Defense, and therefore, they are genuinely an arm of the state,” Rondeaux said.

Stefan Soesanto, a senior cybersecurity researcher at the the Center for Security Studies (CSS) in Zurich, who has studied the Ukraine IT Army, told Motherboard that in his opinion, “Wagner is a legitimate target and posting pictures of dead wagner mercenaries online is not a violation of the Geneva Convention.”

Sign up for Motherboard’s daily newsletter for a regular dose of our original reporting, plus behind-the-scenes content about our biggest stories.