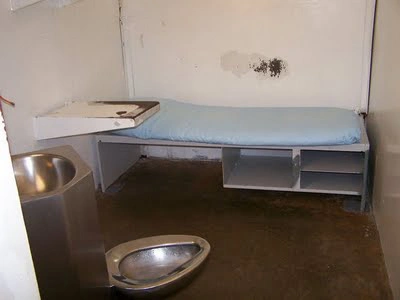 Texas prisoner Jason Renard Walker writes on ways to protect yourself against an attack by prison guards.

The purpose of this report is to inform prisoners living in Polunsky Unit’s death row and ad-seg cell blocks on ways to protect themselves and their property against Polunsky’s deadly cell extraction teams and silent partners, that use their job titles to assist in the cover ups.

I’ve also listed the known actors and usual suspects that, I learned, make up a small piece of the administration’s murder squad hierarchy.

This is being done in an effort to fully update those living in these environments on who these clowns are and what to expect (if you aren’t already on point) when they surprisingly pop up at your cell door, for reasons unrelated to any need for a use of force, yet with clear intentions of a race-motivated beat down.

Staff at the Polunsky Unit maximum security unit in Livingston Texas, center the acts of abusive and violently unprovoked cell extractions as tools of social control against prone and isolated prisoners of color, and unpopular social groups like gay and transgender prisoners. Simply, those not adhering to the happy slave status quo.

When I say “staff”, I’m simply referring to all TDCJ employees that are in cahoots; like nurses, grievances investigators, commissary workers and whatnot.

It is a well-known fact that a closet gangbanger by the rank and name of Captain Carter is the orchestrator and head of Polunsky Unit’s “murder squad”. Warden Dickerson serves as her underwriter, with Lieutenant Sligher and Sergeant Schwarz serving as the enforcers, coupled with a camera operator named Officer Wootley as the recorder of the beatings.

Officer Barker is responsible for ordering the beating of Marquis Kingsbury #2303732 on July 22, 2021, by falsely telling Captain Carter he urinated on her through the food slot on his cell door.1

Carter notified Schwarz. The team suited up and tried to kill Kingsbury on camera with no regards to future consequences, since Dickerson and Carter involved themselves in the investigation. Both Aragon and Redding made failed efforts to get my “ass kicked” days before Kingsbury’s beating.

If any readers are aware of any other staff that are part of the hierarchy, please send me your detailed reports, affidavits, and evidence to add to the ongoing investigation, ℅:

Simple ways to protect yourself

Incarcerated readers that have managed to keep up with my writings for years are aware that I stayed in Ad-Seg for nearly a decade. I was housed in both 12-Bldg and E.CB at Clements Unit in Amarillo2
. Many of my articles on Clements are posted to my website: www.jasonsprisonjournal.com

So I’m well aware of having my property taken and destroyed; bogus write-ups; being gassed and stripped naked for days; being denied meals, rec and showers under the “verbally refused” banner; while filing Step 1 and Step 2 grievances that are intentionally denied or misconstrued so that my concerns weren’t addressed.

Though it’s been years since my release from Ad-Seg, I still concern myself with helping those that remain under such restraints, even at the cost of expending my own time, money, and resources.

The following list and instructions are things you can practice to: increase your chances of avoiding vindictive cell extractions; minimize the amount of damage inflicted if a cell extraction does occur; reduce loss of property and ward off future attacks and retaliation for complaining. Not to mention creating bonds with your neighbors.

1. Unite with your neighbors and create a culture of resistance.

A culture of resistance is an act of creating a community for you and those around you, based on: respecting each other’s person, space and property; conducting yourself in a principled manner as men. Avoid feeding into the childish games guards tend to play. Since, in effect, it is the loss of a verbal battle and their cowardice to fight on equal terms that prompt assaultive cell extractions and property theft. Avoid dry taunting and instigating, based on the fallacy that they won’t jeopardize their job to carelessly retaliate; be more open to seeking help from each other without the expectation of charging or paying a fee; recognize who your real enemies are.

When guards enter your cell block, they should feel the vibe that weak divide and conquer tactics, Stockholm Syndrome and the like have no effect and are subject to immediate exposure and rejection by the residents: vis-a-vis, a culture of resistance.

This step will take time, effort, and agitated struggle. As most prisoners in isolation have a passion and need to emotionally attach themselves to those of uniformed authority, while happily rejecting the trust and care of those around them that offer it, based solely on the fact that guards treat those people this same way.

Cell extraction teams have a tendency to prey where the the least signs of united resistance are present, and thrive where inmates clap, bang, and applaud them to do as they please. The amount of injury they inflict is determined by the approval they receive as they build their momentum to enter the cell.

Following an illegal cell extraction, you will usually be tossed back into the empty gassed-up cell naked. So when a cell extraction is imminent, toss piles of baby powder under the toilet, inside the lockers and under the bunk. Patting it on your face and body will absorb sweat and the oily chemical agent. It soothes instantly. Also share it as needed. Never rub your body with water.

3. As the cell door opens: ball up in front of it, using your arms and elbows to protect your head and face. Bring your knees up to your chest to protect your stomach and ribs. This not only minimizes the damage you would normally receive. It slows down their bulldozing momentum and technique tremendously. It also hampers the last three guards (of the five-man minimum) from getting free licks without it clearly being on camera, as they will be unable to use their momentum to crash into you.

4. Scream out loud that you are not resisting. They will immediately tell you to stop resisting, while keeping you pinned on your back and your hands pinned to your side so you can’t block any punches, eye pokes, throat grips or testicle crushes. It’s best if you roll on your stomach as soon as they enter, but that takes practice. And keep your eyes closed. Some wear gas-saturated gloves, or ones with barbs on the finger tips, to assist with eye gouging.

5. Any witnessing prisoners should always keep in mind that the portable camera picks up sound. Demand witness statements by saying “my name is so-and-so, I live in so-and-so cell and witnessed so-and-so, I need a witness statement.” Of course you won’t get one! But what this does is provide audio evidence that the supervising guard(s) failed to follow policy, by providing witness statements to those reporting an excessive use of force. Your denial should be followed up by grieving it using a Step 1, then a Step 2.

6. Before “the team” arrive, anything you can’t afford to lose should be sent to a neighbor to prevent guard theft and destruction. As you’ll be without whatever they don’t toss for quite some time. Witnesses should keep journals of the events.

7. Keep your mouth closed and slowly breathe out of your nose once you’re thrown back in the cell. Don’t attempt to wipe gas off the wall. Toss baby powder on any visible stains and blotches.

It’s a shame that a report like this has to be made. But in environments where we are left to fend for ourselves, it’s always safety first.

Dare to struggle, dare to win! All power to the people!