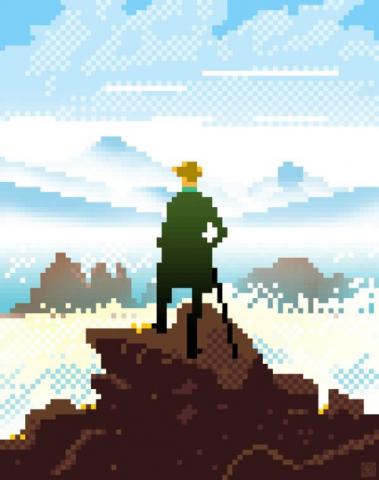 However, Kropotkin–and I argue we should follow in suit–says Marxism is "mere collectivism". That is to say, Marxism dissolves the individual into the will of the Marxist Political Party.

Here I want to talk about the other end of this spectrum, the "egoist" or the "individualist" form of anarchism. Forgive me if this strikes one as out of left field, but my conscience has faltered lately.

I have never questioned my commitment to to the communist cause, or even the Libertarian one, but my–‘faith’ shall we call it–in the possibility of mass communist politics, specifically, has been the weakest it has been for many years.

As sure as Marx understood the need for communism to best allow humans to flourish and express themselves, it is easy to comprehend that communism is the best social system; having some grip on how to make the ideal become actual is something completely different.[^1]

Food is absent on the supermarket shelves. Petrol is the most expensive it has ever been. There is conventional, and sometimes threatened nuclear war in Europe. Any of these social problems could have been the basis of mass social protest.

I wonder sometimes if many in the masses can imagine the end of the world before the end of capitalism and class society.

This past little while has tested my patience and resolve for remaining committed to the collective and public communist cause. It is not because I feel that I have been ineffectual. It was because I felt the window for there to be any revolution at all had closed.

The metaphor I usually share with you all is that we anarchists here in Perth are holding the candle in this storm of fascism. I am scarcely concerned about the fascists–the collapse will, and has already been more daunting. The candle has not been extinguished, but will it ever ignite a bush fire?

None of the usual platitudes calm me down these days. It is true if it can happen once, it can happen again. But, I assume, I will be much older if it does.

Radical individualism in the so called anarchist community here in Perth remains a popular and fashionable force. I have had affinities and comradeships with several avowed Individualists. As more politically-oriented anarchists in Perth have pointed out to me, Individualism undermines the possibility of organised political action–and I agree: I do not think individualism can resist oroverturn Perth’s system of oppression and domination.

I think this is the only justification for Individualism as an anarchist: you become lost to your community, and become isolated. An Individualist denies that a social group should ever progress beyond a collection of individuals.

Hegel calls this predicament the "Unhappy Consciousness".[^2] The Unhappy Consciousness has already transitioned through Stoicism and Scepticism as self-consciousness, and confronts other humans as "the Unchangeable". The individuality of one’s political beliefs comes upagainst an Unchangeable and uninterrogatable universality outside itself. It seems like it has no way of having a dialogue with thepeople, the masses. The self-consciousness that the individual anarchist has for its object is alien and unrelenting.

The Unchanging Other for the anarchist, has, however, its sociability made possible by introducing a third person. This mediator, a third, allows a union of anarchists. Individualists might, unfortunately, reserve more rights against the union, but by collectively interpreting, thinking, and deciding, we can each occupy, democratically, the role of the mediator. For each other, we can see ourselves in the universality of civil society. At least in the present, this exact stage of the contemporary moment of the dialectic.

I see Individualism as a radically alienated form of holding the candle in the wind. And, isn’t it true that the Individualist does not hold to the needs principle? If Marxism is "mere collectivism", isn’t Individualism "mere alienation"?