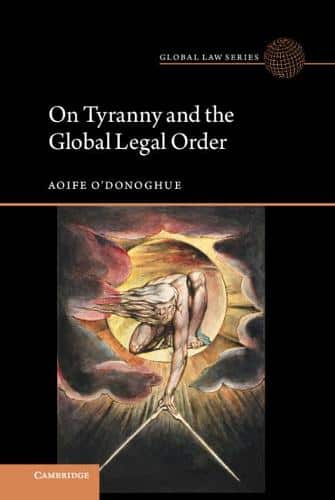 Review: On Tyranny and the Global Legal Order

The language of ‘tyranny’ is undergoing somewhat of a renaissance lately. The election of Donald J. Trump as president of the United Sates awakened liberal fears of democratic decay and tyrannical rule, while many opponents of COVID-related restrictions argued that their severity, duration and (perceived) arbitrariness rendered them tyrannical, and by implication worthy of opposition and even disregard. However, with the (notable and growing) exception of far-right and libertarian detractors, few seem to inquire about the relationship between tyranny and the global legal order. It is, therefore, commendable that O’Donoghue decided to embark upon ‘this heresy that ought to be inaudible’. (p.221). Combining political theory, critical geography and international law, this study makes the case for tyranny’s contemporary relevance as an analytic of the international legal order. What is provocative, valuable and critical about this book is not only the question asked but also the places O’Donoghue looked for answers. The book focuses on the legal infrastructure of counter-terrorism (pp.168-181) and on international economic law (pp. 203-216) to make the case that elements of tyranny are present in the international legal order. The first example is arguably more palatable to liberal international lawyers: the openly unrepresentative character of the UN Security Council, the legalisation of power politics in the form of veto powers of permanent five members, and its pivot toward individual sanctions without basic guarantees of individual rights has been rightly criticised by many and even given rise to high-profile conflicts between the Security Council on the one hand and national and regional courts on the other.

These criticisms have not led to consistent and widespread suspicion toward what Orford has described as the rise of executive power in international law[1] and O’Donoghue shows to be tyrannical. Two worryingly contemporary examples, contagious diseases and climate change, show that O’Donoghue’s characterisation of the Council as tyrannical should give pause to many who write and practice on the field. In the past thirty years, proponents of the concept of ‘human security’ in international law and international relations have been arguing that it would be both internationally lawful and politically beneficial if the Council became involved in matters beyond traditional security threats (even broadly conceived). So far, these efforts have yielded mixed results. A recent initiative by the United States to have climate change designated as a threat to the peace under Article 39 of the Charter was unsuccessful due to Russia’s veto. When it comes to contagious diseases, proponents of an expansive interpretation of the Charter that grounds the Council jurisdiction scored one decisive victory when Resolution 2177 designated the Ebola outbreak in Liberia, Guinea and Sierra Leone as a threat to the peace. This approach has not been replicated since, and in the case of COVID-19 the Council’s approach has been exceptionally cautious given the geopolitical sensitive nature of the outbreak.

It is difficult to know what the future holds in regards to the Council’s role in these two areas. The book at hand certainly offers a powerful warning against those hoping for a benevolent tyranny of the Security Council. Despite its nominally liberal commitments, such scholarship often disregards the Council’s tyrannical record when it comes to individual rights, its unrepresentative nature, the fact that its permanent members are some of biggest greenhouse gas emitters, or the fact that both its discursive and material tools are those of security. Often, its enforcement capacity is heralded as the main reason for the Council to get involved with these matters, in an intellectual move that valorises (unaccountable) ‘action’, ‘strength’, and the imperative to ‘do something’, often something violent, in the face of crisis. O’Donoghue’s discussion of tyrannophilia amongst past and present public intellectuals (pp. 137-141) seems particularly apt here as does her observation that ‘a tyranny is full of law; indeed some tyrants are lawgivers, a benefit sitting alongside stability, order or wealth’ (p.218).

If locating tyranny at the heart of the collective security system sounds heretical, O’Donoghue second case-study is even more provocative. In one of the most valuable contributions of this book, O’Donoghue posits that international economic law has a dual, Janus-like connection to tyranny. Already since the era of classical liberalism accusations of local tyranny (often expressed in the idiom of ‘Oriental despotism’) have justified Western imperialism (p. 190, p.209). These accusations anchor demands for comprehensive domestic reform which invariably promote (a particular version of) free trade and the interests of transnational capital (Ibid). At the same time, the international institutions that issue these prescriptions (notably, the IMF and the World Bank) do not themselves comply with elementary ‘good governance’ requirements, including justification of decision-making, functional accountability mechanisms, and respect for the rights of the weakest. Following post-colonial theorists such as Chakrabarty, O’Donoghue shows that this duality of standards has characterised liberal forms of imperialism since their inception (p.184) and persists to this very day. Expansionism and economic exploitation did not emerge with liberalism or capitalism. However, liberal capitalist imperialism has faced the distinct challenge of justifying despotism abroad while holding on to the notions of liberty and equality. This tension has animated much of classical liberal thought and-Donoghue argue- inheres in international economic law, where the even-widening gap between (neo)liberal rhetoric and tyrannical practice is at least partly responsible for its contemporary crisis. It is for this reason that the (neo)liberal positioning of Western-centric international law and institutions as counterweights to tyranny (domestic or international) rings hollow after decades of ‘structural adjustment’.

This brings me to my one critical point about this book: O’Donoghue’s reliance on the distinction between the ‘rule of law’ and ‘rule by law’ as a means for identifying tyranny. In her own words: ‘absolute authority in law making, creation, interpretation and enforcement indicates tyranny.’ (p. 96). This understanding of tyranny, albeit part of a long tradition of political and legal thought, runs the risk of reproducing a ‘cartoonish figure of excess and cruelty’  that the author otherwise warns against early in the book (p. 3). There are two ways of articulating my objection. The first would be that in the international legal realm in particular tyrannical power does not assert absolute authority but rather relies on diffuse systems of authority and legality to articulate itself. Rather than bypassing, for example, the state and denying Third World sovereignty, contemporary legalised imperialism relies heavily on the legal prerogatives of the state for its actualisation. The ‘war on terror’ offers an instructive example of this synergy in tyranny. Darryl Li has shown that in the context of the war on terror and, in particular, of extraordinary rendition the sovereign authority and law-making/breaking capacity of Global South states has been crucial in the construction of the juridical landscape and the perpetuation of irresponsibility for US authorities orchestrating grave human rights violations.[2] Similarly, in the context of structural adjustment and beyond, international financial institutions rely heavily on national and sub-national authority and law-making for the implementation of neoliberal reforms. Multi-scalar convergence (and tension) is the means through which the tyranny of the neoliberal international legal order is articulated. In other words, searching for a Hobbesian sovereign with demands for absolute legal authority can lead us astray when trying to locate the tyrannical aspects of the international legal order.

The second way in which this distinction between ‘rule of law’ and ‘rule by law’ obscures rather than assists the identification of tyrannical power is the state-centrism implicit in this emphasis on legal centralisation. However, as O’Donoghue’s own engagement with early feminist thinkers, such as Mary Astell, shows (pp.48-9), certain forms of tyrannical power are diffused, mundane and rely on the assertion of (a particular version of) individual rights, rather than on their violation by a centralised legal power. The patriarchy is, of course, such an example. Another is the tyranny of private property itself. Both Marx and US legal realists theory have observed that property rights are not relationships between people and things but rather between different people through the instrumentality of things. To assert that a piece of land is ‘mine not yours’, especially if I claim full private property rights, is to assert my prerogative to exclude all others from this piece of land unless they agree to my (capricious) terms. With the (anomalous and profoundly strange) exemption of E.P. Thompson’s defence of the ‘rule of law’ as a ‘unqualified human good’,[3] one would be hard-pressed to find any modern understanding of the ‘rule of law’ that does not protect some version of this tyranny of private property. Another way of putting this could be the following: a multitude of actors (capitalists, property owners, men, parents) exert tyrannical power over others and they do so through ordinary functions of the law and very often precisely through the ‘rule of law’. This is not a subversion, a high-jacking or mere facade, but one of the most obvious functions of legal systems, domestic or international. Now, one could argue that legal systems also offer tools to resist, moderate or undermine these tyrannies. They would not be wrong, but the latter does not negate the former. Perhaps the most concerning aspect of the intersection between international law and tyranny is that there is nothing peculiar or even insincere about tyrannical power’s engagements with our field.

[1] Anne Orford, International Authority and the Responsibility to Protect (Cambridge UP, 2011).

[2] Darryl Li, ‘From Exception to Empire: Sovereignty, Carceral Circulation, and the “Global War on Terror”’ in Carole McGranahan and John F. Collins (eds.), Ethnographies of US Empire (Duke UP, 2020).