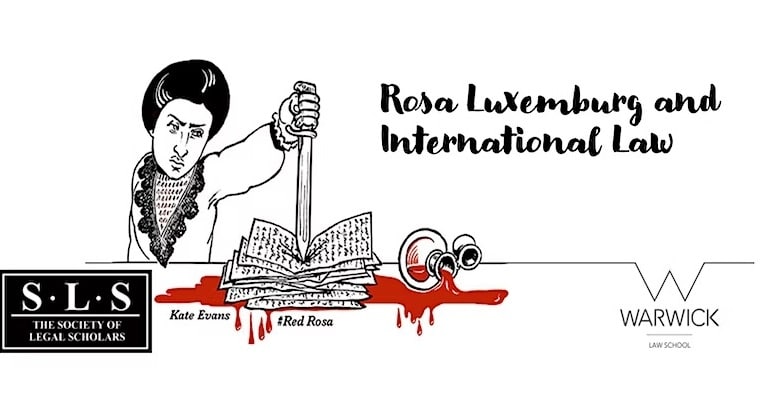 Last year marked the 150th anniversary of the birth of Rosa Luxemburg: a revolutionary theorist and political activist, whose work has provided important political economy critiques of imperialism, capitalism, nationalism and advocated for the collective commitment to social justice. While recent books have celebrated her life and intellectual and political legacy, engagement with her work in international law, although with some notable exceptions, has been largely marginal. Despite her sharp and insightful analysis of the nexus between colonialism and capitalist accumulation and her commitment to anti-militarism and internationalism, Luxemburg’s work remains less visible and prominent than male social thinkers. We believe that placing Rosa Luxemburg’s work into conversation with international law – historically and with an eye to the future – can add significantly to our understanding of international legal debates in relation to imperialism, capitalism, ableism, and questions of race, class and gender critique. We aim to collectively explore what an engagement with Luxemburg’s work may offer at this juncture of neoliberal capitalism, climate disaster, and pandemic. (Events that Rosa Luxemburg didn’t live to see but predicted with her work.)

About the public lecture by Dr Dana Mills ‘Socialism or Barbarism, 150 years on’ (4.30pm): in this talk the legacy and contribution of Rosa Luxemburg to radical history and theory will be examined against the backdrop of the world in 2022. What can we learn from this giant of social justice, exactly 150 years after she was born?

Bio: Dana Mills received her DPhil from Mansfield College, Oxford in 2014. She has held teaching and research positions at NYU, Northwestern, American Dance Festival, University of Oxford and University of Amsterdam, among others. She is the author of Dance and Politics: Moving beyond Boundaries (Manchester University Press, 2016); Rosa Luxemburg (Reaktion, 2020) and Dance and Activism (Bloomsbury, 2020). Since March 2021 she is the Director of External Relations and Development at Peace Now.

• Michele Tedeschini (Harvard Institute for Global Law and Policy), Lessons from Luxemburg: The emptiness of international law and the dialectic of capital accumulation

• Antal Attila (Eötvös Loránd University), The New Form of Capitalist Militarism: The Permanent State of Exception. The Challenges of Anti-War Theory and Activism

• Mia Swart (Al Jazeera), ‘Pushed into the burning desert’: Rosa Luxemburg’s analysis of imperialism through the lens of reparations

Participants will receive the Zoom details to access the event.