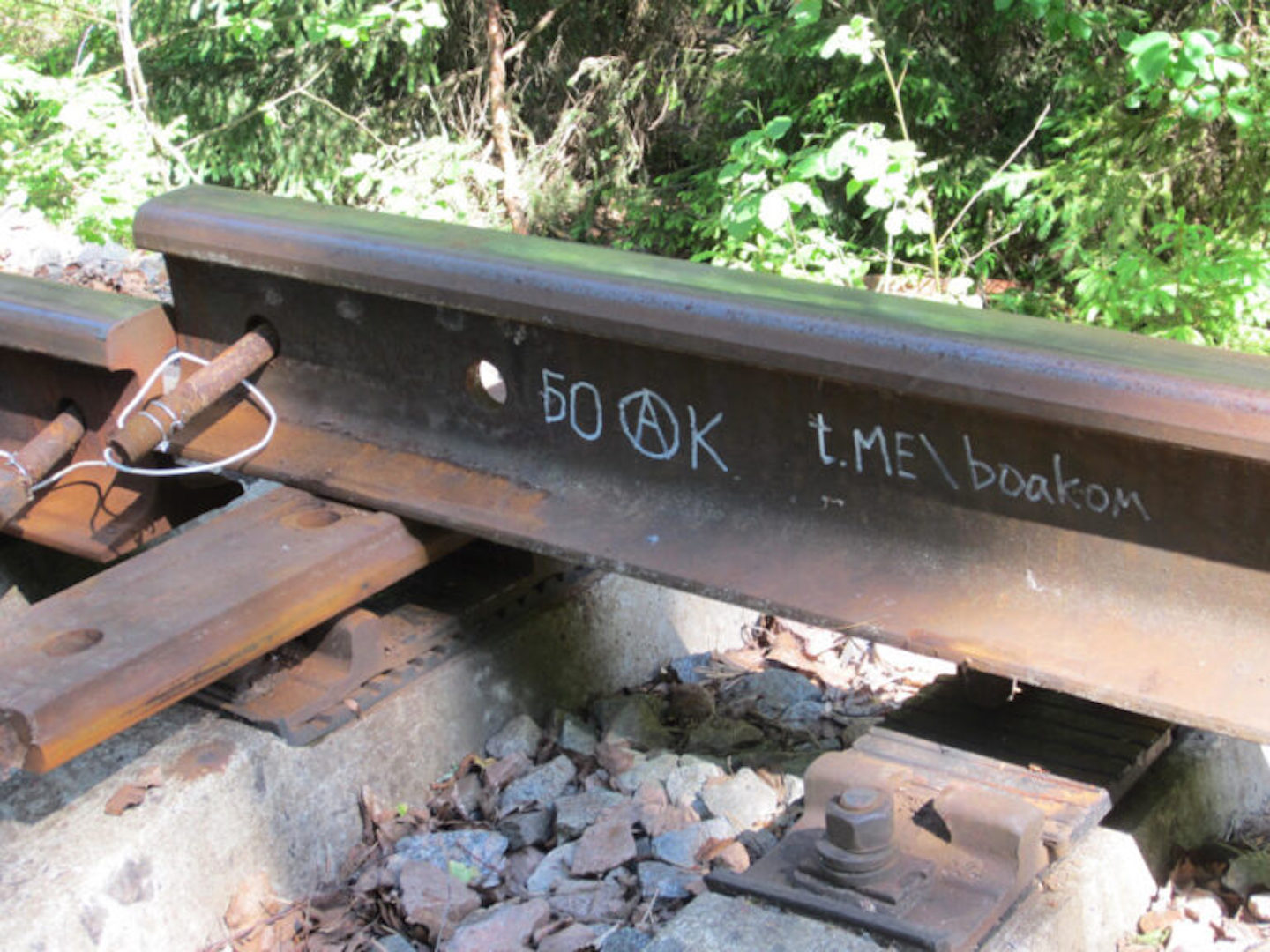 In late June, a group of anarchists donned camouflage, covered their faces, and snuck out into a forest about 60 miles northeast of Moscow with a lofty goal: to sabotage Putin’s invasion of Ukraine by physically disabling railways used to supply weapons to the Russian military.

The group selected its target using Wikimapia, a “geographic online encyclopedia” that labels geographic features observed in photos from Google Maps. Once they arrived at the site, the group got to work, unscrewing dozens of nuts off the rails, and four off the rail joint, while keeping the electrical signal largely intact with a wire to evade detection over the course of several hours. Finally, they scribbled “BO(A)K,” on the tracks with a white marker before dissolving back into the countryside.

“We see [the] current conflict in Eastern Europe as the regional stage of global struggle,” an anonymous spokesperson from BOAK, the anarchist communist combat organization that claimed responsibility for the sabotage, told Motherboard in a written interview. “The defeat and collapse of Putin’s regime will give a chance at least for peoples of Ukraine, Belarus, and Russia to make important steps towards social liberation.”

The BOAK spokesperson and others spoke to Motherboard under the condition of anonymity, in order to ensure their safety from retaliation by Russian authorities.

BOAK had claimed responsibility for the action on their Telegram channel and blog. Sabotaging tracks that supply the Russian military is cost-effective, relatively easy for lay people, and does not harm civilians, the group told France24. 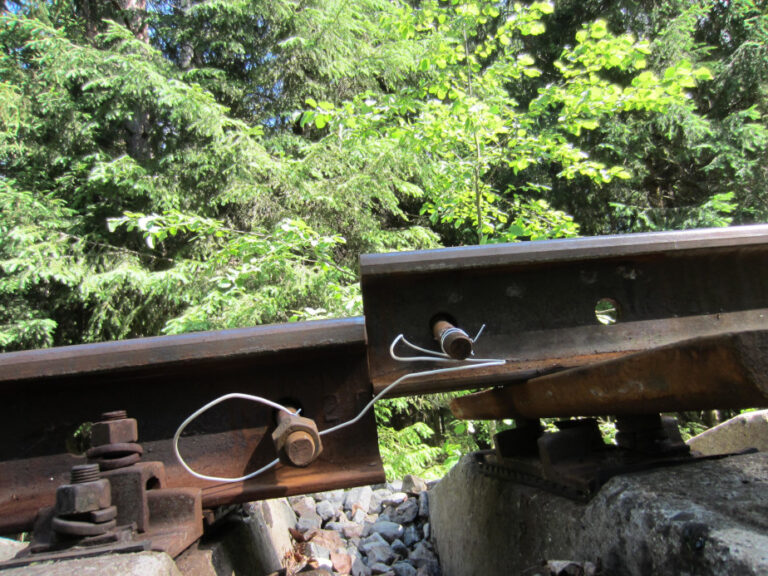 A train track north of Moscow sabotaged by BOAK to stop shipments of weapons to the Russian military. Photo: BOAK

Russian railways had reportedly been sabotaged by various dissidents on as many as sixty-three occasions during the first three months of Putin’s invasion, according to a Russia-focused independent media outlet The Insider, although the publication noted some instances of malfunction may be attributable to routine mechanical failures. Some of the attacks were done in collaboration with a clandestine network of railway workers, hackers, and other dissidents located in Belarus, Russia, and elsewhere throughout the region. Human rights groups reported that in the early months of the invasion, at least 11 dissidents in Belarus were arrested after being linked to the sabotage by authorities.

The action in June wasn’t the first time BOAK claimed responsibility for an act of sabotage. In April, the group wrapped a cell phone tower’s electrical cables with rags, doused them in flammable liquid, and set them on fire to impede communications between police and military forces, according to the group. Prior to Putin’s assault on Ukraine, BOAK claimed responsibility for burning a telecommunications tower belonging to a Turkish company near Kyiv in solidarity with the Rojava Revolution in North and East Syria.

Others are choosing military recruitment and enlistment centers in Russia as their targets. According to local media reports and Telegram channels, at least 23 offices have been attacked from February to July, 20 of which involved arson. In some cases, the guerillas posted videos of the acts themselves; BOAK told the anarchist radio show The Final Straw that these acts of resistance are a spontaneous and decentralized phenomenon.

For BOAK, taking direct action is important for sabotaging Putin and his war machine, but it also helps dissidents gain the strength, skills and power necessary for achieving their longer-term revolutionary political goals.

“We advocate social revolution as the replacement of statist and capitalist World Order, BOAK wrote, “by the popular self-government and collective control over [the] economy based on freedom, equality and solidarity.”

An American audience may associate anarchist communists in Russia with Leninist or Stalinist political traditions, but the group was clear to differentiate its methods and ideology from Marxist-Leninists.

“We do not need dictators, presidents and parliaments,” they explained. “We are against parliamentarianism even in ‘democratic’ states.”

Instead, anarchist communists work toward building power from below by developing decentralized, non-hierarchical voluntary networks. Groups or communities within a network, sometimes called a federation, each have their own unique set of decision-making structures, economic and social arrangements, yet they reinforce each other in mutually beneficial ways. Higher order units within a federation may be created to administer and coordinate certain tasks, but they do not impose orders on lower-units like a hierarchical government does.

The group says that these direct actions mirror the anarchist ethos of people taking matters into their own hands, without permission from authority figures.

“[T]he parliamentary struggle in modern Russia is not only impossible, it contradicts the anarchist principle of the direct involvement of people into the transformation of society, [and] teaches people to trust ‘professional political experts,’” the BOAK spokesperson wrote. “Direct action, on the contrary, is an instrument to overcome alienation, it teaches people to participate in decision-making, to rely on their own strengths, and not just wait [for] orders from the privileged Minority.”

Of course, taking direct action against a heavily-armed state is extremely dangerous. Russian authorities often torture dissidents and sentence anti-war activists to lengthy prison terms. Vladimir Sergeev and Anton Zhuchov, for example, face up to ten years in prison for bringing molotov cocktails to an anti-war demonstration. While detained they both attempted to commit suicide, but survived after being hospitalized and were arrested once again.

The actions of groups like BOAK parallel militant acts taken by political dissidents around the world. In the United States, anarchist political prisoner Eric King is serving a ten-year sentence for throwing a molotov cocktail at a politician’s empty office in solidarity with the 2014 Black liberation uprisings in Ferguson, Missouri. Josh Williams was sentenced to eight years for lighting a trash can on fire during the Ferguson uprisings. And an innumerable number of protesters arrested during the George Floyd uprising have been sentenced to years behind bars. In May 2022, Brittany Martin was sentenced to four years in prison for allegedly yelling at a cop during a small demonstration in South Carolina.

BOAK is encouraging people around the globe to show solidarity for prisoners of war in Russia, and continue to pay attention to the atrocities committed in Eastern Europe even though the war is no longer front-and-center of the news cycle.

“We would just ask your readers not to turn a blind eye towards the events in Eastern Europe,” they wrote. “An effect of this battle definitely will reach far beyond its region. The forces who fight totalitarian regimes here need your support and participation.”