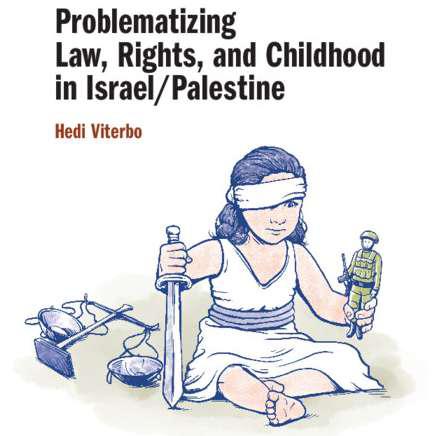 Hedi Viterbo’s book, Problematizing Law, Rights, and Childhood in Israel/Palestine, constitutes a significant contribution in several respects. From the theoretical perspective, it challenges the common paradigms relating to international human rights law, in particular the Convention on the Rights of the Child, and relating to children’s rights, the concept of childhood, and Palestinian children’s lack of protection. The book problematizes and dismantles the universal concept of childhood, taking a stand against the ostensible neutrality of this concept and its lack of context, and instead endowing it with ethno-national meaning that is rooted in place and time. Thus, according to Viterbo, Israel forced upon Palestinian children a certain legal model of childhood that is detrimental to them, using the law, the judiciary, and the rhetoric of human rights to operate its violence while politically exploiting international human rights law and the principle of the child’s best interest to enable the regime of control and occupation.

The book is interdisciplinary in the deepest sense of the word. Indeed, it integrates many fields of knowledge, including law, sociology, psychology, political science, and other disciplines that both enrich the analysis and help to dismantle and analyze basic presumptions vis-à-vis law, human rights, and childhood.

Viterbo’s critique is anchored in rich and varied empirical research based on hundreds of previously unstudied documents, among them hundreds of rulings by military courts. Thus, the research is rooted in the political context of the continued Israeli military occupation of the West Bank and Gaza and violations of Palestinian children’s rights. Viterbo’s criticism also encompasses the human rights community, which uses the same mechanisms of discourse regarding human rights that the Israeli authorities employ as a tool to deepen and justify the mechanism of Israeli control. Consequently, the human rights community accepts the Israeli structuring of the Palestinians, including Palestinian children, as a security threat. At the center of the analysis throughout the book are three central axes: law and judiciary, children’s rights, and state violence.

The book’s central contribution, apart from problematizing human rights law and children’s rights, is its exposure of the structural context of oppression that enables these violations. However, an additional epistemological contribution is its critique of the human rights discourse and international human rights law, which the Israeli authorities employ to depict certain practices as humanitarian when in fact they reinforce violence. This clarifies the disparity between the global and local levels of discourse, amidst a call to anchor the human rights discourse in time and place and in layered ethno-national contexts. This contribution extends beyond the Israeli/Palestinian context and is relevant to other global south contexts. Thus, Viterbo connects to critical legal paradigms in general and international human rights paradigms in particular, which seek to examine the relevance of the law to a range of contexts (gender, status, racial) that cannot be detached from multiple political contexts.

The book also sheds light on the concept of childhood and its social and legal structuring. Viterbo suggests that we should view this as a complex concept, dependent upon time and place, and upon cultural, political, and social contexts. Likewise, he claims that the social structuring of this concept is in fact western in nature. Law and the judiciary play a role in structuring childhood and youth and the relations and borders between them (such as: the age at which one is allowed to marry, the age of criminal responsibility, compulsory education, etc.)

Thus, for example, Viterbo demonstrates how the Israeli military court system uses the punishment of children under the age of criminal responsibility as a warning to the older generation of Palestinians. In addition, he claims that the category of children is not exclusive to those legally defined as children. Using what he describes as the infantilization of soldiers and the Israeli legal system, and in relating to soldiers as children (perhaps to reduce the responsibility placed upon them as adults using violence to further the occupation), Viterbo suggests that we should widen the interpretational framework of the legal conception of children’s rights while relating to the political context.

Viterbo provides examples of how the human rights discourse is employed to whitewash human rights violations instead of structurally exposing the central element: the lack of justice. The neutral, universal language of human rights and children’s rights renews the lack of justice and even enables it. Thus, in chapter 4, Viterbo demonstrates how the military justice system introduced several reforms following international pressure from the human rights community regarding minors’ right to special protections and the need for a juvenile justice system that operates according to principles different to those applied to adults. This led to the establishment of military juvenile courts, which in reality fail to protect the rights of minors and do not improve the protection of the minors standing trial yet enjoy the legal whitewashing afforded by the human rights discourse. Viterbo shows us how the reforms that the state introduced into the military justice system possess a symbolic effect, enabling the Israeli authorities to act in the name of the child’s best interests, in the name of human rights, and in the name of international law, when in fact they harm Palestinians and work to weaken them. Indeed, the military justice system does not act according to the principles that characterize juvenile justice systems in international law, including, among other things, the principle of the best interest of the child and the use of arrest and imprisonment as a last resort, preferring the rehabilitation of the minors.

Based on an examination of hundreds of legal rulings by military courts, Viterbo demonstrates the power relations between occupier and occupied and the legal whitewashing that this system conducts using the discourse of international human rights. As such, Viterbo exposes one of the central paradoxes in the military justice system in general and in particular in the juvenile system, in which military rules and orders are written by the Israeli occupier. The occupied Palestinians are not only unable to affect its content but are judged according to the interests of the occupying power, which is represented by Israeli judges and prosecutors wearing uniforms, with no right to a fair trial due to their inferior position as the eternal suspects.

Viterbo’s book exposes the reality of the system of military courts that serves as the central agent of the occupation responsible for structuring the settler-colonial childhood. As long as this situation continues, as well as ignoring the violence that it continues to create, change will not be possible.

The critique receives further reinforcement considering disparities relating to the legal standing of Palestinian children under the occupation compared to the legal status of children in Israel following the ratification of the Convention on Children’s rights in 1991. Indeed, this step led to a series of legislative changes in the field of family law focusing on the central principles of the convention regarding equality, the best interests of the child, and participation. It is true that in Israel children from groups that suffer from exclusion and discrimination continue to suffer harm, among them children from unrecognized Bedouin villages, ultra-orthodox children, and Ethiopian children. However, the disparities between Israeli children and Palestinian children living under occupation demonstrate how the authorities treat Palestinian children first and foremost as a security threat and thus at any moment can expropriate their legal protections, which are conditional in nature.

Alongside Viterbo’s harsh criticism, with which I certainly agree, I want to ask whether, considering the hostile atmosphere towards human rights discourse and those responsible for advancing it, human rights organizations, we can re-claim this discourse and the discourse regarding the rights of the child. Can we offer a local interpretational framework, suited to the global south, which takes into consideration the power relations and the structural violence of the political situation, working to correct it? Or is decolonialization of the Israeli-Palestinian space necessary before we can free the children from a settler-colonial childhood?