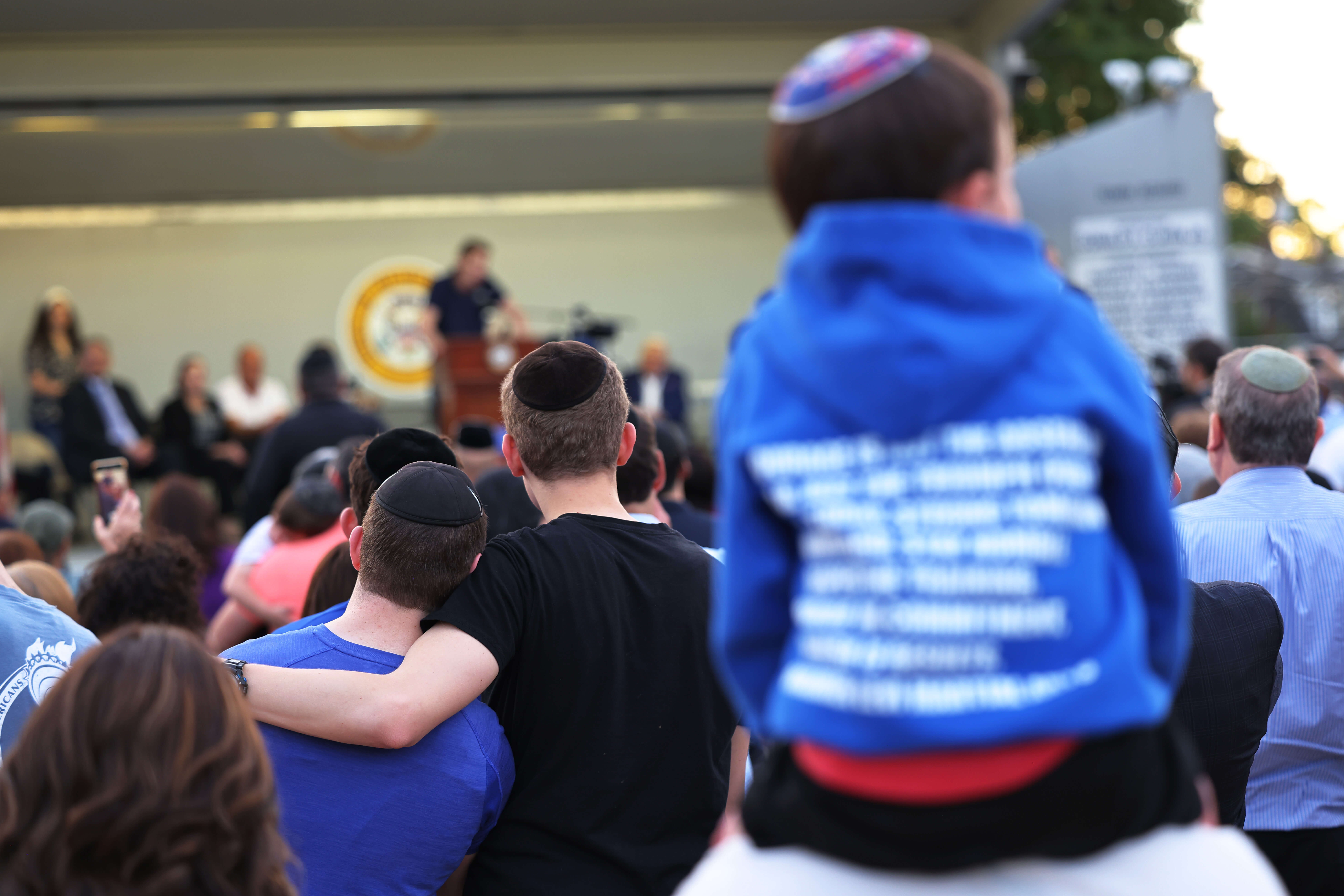 People listen to Joseph Borgen, a victim of a hate crime, speak during a rally denouncing anti-Semitic violence on May 27, 2021 in Cedarhurst, New York. A rally was held by various organizations and local Jewish community groups to support Borgen after a rise of violent anti-Semitic attacks in New York and across the U.S. Photo by Getty Images

The Anti-Defamation league tallied a record number of antisemitic incidents for 2021, partly because last spring’s violence in Israel and Gaza spurred a backlash against American Jews. The organization received 2,223 reports of incidents including harassment and assault, a nearly 10% increase from 2020 and the most ever since it started tabulating antisemitism in 1979. It also counted an additional 494 instances of antisemitism collected by partner organizations like Hillel, and the Reform and Conservative movements.

Aryeh Tuchman, director of the ADL’s center on extremism, said the new report, released Tuesday, underscored the impact that conflict in Israel and the occupied West Bank and Gaza can have on domestic antisemitism.

“We had always sensed that incidents against American Jews increased in moments of conflict in the Middle East but the numbers here were simply shocking,” Tuchman said.

The ADL received reports of 387 incidents of antisemitism in May, while violent conflict was raging in Israel and Gaza, including 15 assaults against American Jews. While the tally includes several reports of anti-Israel activity that was not clearly targeting Jews – including tearing down Israeli flags – it primarily consists of antisemitic vitriol directed at Jews with no apparent connection to Israel.

(Tuchman said the ADL did not usually consider vandalizing Israeli flags antisemitic but included incidents in the report where the “fact pattern suggest antisemitic animus.”)

Synagogues and other Jewish institutions reported menacing voicemails and emails. “F— Jew scum murdering Muslims,” someone wrote to a JCC in New Mexico, “Hitler had it right.” Other incidents included aggressive comments about Israel directed toward Jews who had no apparent connection to Israel.

“You evil Jewish people are killing Palestinian children,” a woman yelled at a Jewish family in Brooklyn while they walked to synagogue.

The ADL also identified 88 antisemitic assaults last year, the highest level of violence against American Jews since it started tracking the number in 2009 — an increase of 60% from last year. The events recorded include several that were well-publicized at the time, including an attack on Jewish diners in Los Angeles by men waving Palestinian flags, along with others that do not appear to have been reported in the media. These include a Brooklyn man who reported that he was beaten and choked by a group of individuals who demanded he say “Free Palestine,” and an individual who threw a glass bottle a Jewish girl as she was getting off a school bus in suburban Cleveland while yelling “f——- Jew.”

A majority of assaults took place in New York City, including 34 in Brooklyn, while 14 occurred in Los Angeles.

The increase in violent attacks comes as other minority groups are also facing high levels of assault. For example, Stop AAPI Hate received 1,635 reports of racist assaults against Asians in the U.S. over the last two years.

The annual audit of antisemitism has seen elevated numbers in recent years, with an increase beginning in 2014 after a decade-long decline. The current uptick is eclipsing a similar wave of antisemitism in the 1990s, when reported incidents rose to a peak of 2,066 in 1994.

It is hard to directly compare this year’s report to previous audits because of the ADL’s move to include reports from six other organizations, whose data was not included in past tallies. “If we’d had their numbers last year, our numbers would have been higher last year,” Tuchman said.

Tuchman also said that the overall increase in antisemitism over the last several years may have also influenced the total count.

“My sense is when people become aware of more antisemitism, they report more antisemitism,” Tuchman said. “There is a greater awareness, which leads them to reach out to us, because they feel that it’s more significant than it was before.”

The ADL used the combined number of reports it received, along with those from the partner groups, to state in its publicity materials for the audit that there was a 34% increase in recorded incidents of antisemitism last year compared to 2020.

The report includes five policy recommendations, including encouraging civic leaders to speak out against antisemitism and hatred, increased government funding for security at Jewish institutions, hate crime and anti-bullying training for law enforcement and students and improvements to the collection of hate crime data.

Jonathan Greenblatt, the ADL’s chief executive, said that it was difficult to pinpoint the specific causes of increased antisemitism but that the data pointed to an alarming trend for the country.

“We do know that Jews are experiencing more antisemitic incidents than we have in this country in at least 40 years,” Greenblatt said in a statement, “and that’s a deeply troubling indicator of larger societal fissures.”

The post ‘Simply shocking’: ADL received record reports of antisemitism in 2021 appeared first on The Forward.