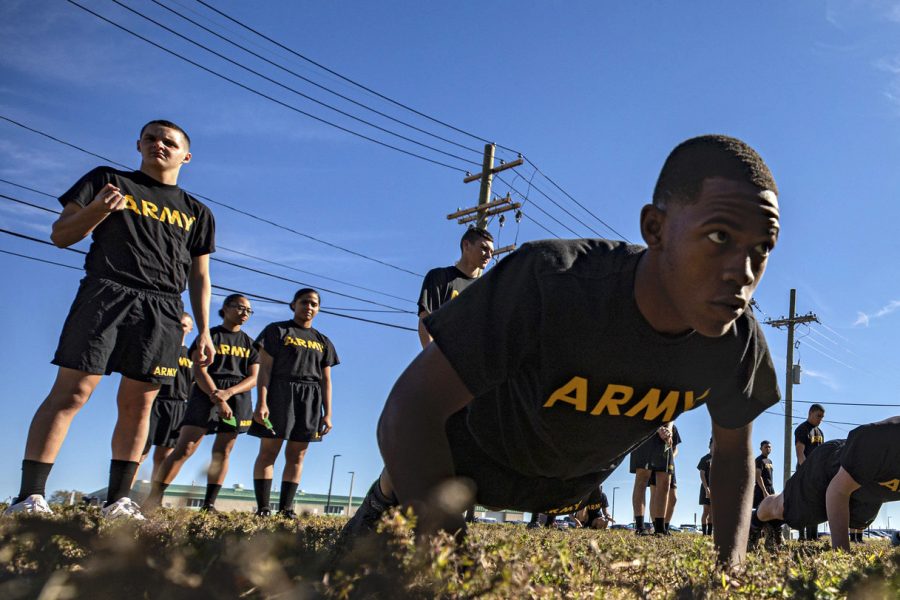 The US military has a long history of recruiting poor people by offering benefits like free college. With Joe Biden’s partial student debt forgiveness, GOP war hawks are fretting that the military won’t be able to prey on desperate young Americans anymore.

Student loan forgiveness undermines one of our military’s greatest recruitment tools at a time of dangerously low enlistments.

In the six years since Banks first ran for Congress, he has taken more than $400,000 from defense contractors, weapons manufacturers, and other major players in the military-industrial complex. Corporate political action committees for Raytheon, Boeing, Lockheed Martin, BAE Systems, L3Harris Technologies, and Ultra Electronics have each donated tens of thousands of dollars to Banks, according to Federal Election Commission (FEC) data analyzed by OpenSecrets. He now sits on the House Armed Services Committee, which oversees the Department of Defense and United States military.

Members of the committee have already collectively received more than $3.4 million from defense contractors and weapons manufacturers this election cycle.

Banks’s admission highlights the way the student debt crisis has been exploited by the military-industrial complex. By saying the quiet part out loud, Banks is finally speaking the truth about how military recruiters use the GI Bill — the 1944 law that awards a robust benefits package to veterans — as a remedy for the cost of higher education to convince young people to enlist.

“To have members of Congress openly imply that the answer to this is to actually exacerbate hardship for poor and working-class youth is, actually, the best thing for young Americans to see,” Mike Prysner, an antiwar veteran and activist, told the Lever. “It proves their reasons for not joining are totally valid. Why allow yourself to be chewed up and spit out in service of a system that cares so little for you and your well being?”

Biden’s initiative will cancel up to $10,000 of federal student loan debt for people who make under $125,000 annually, plus an additional $10,000 for these borrowers who received a Pell Grant in college. The program is estimated to eliminate roughly $300 billion in total debt, reducing the outstanding student debt nationwide from $1.7 trillion to $1.4 trillion.

According to the College Board’s 2021 Trends in College Pricing and Student Aid report, the average cost for annual tuition and fees at public four-year colleges has risen from $4,160 to $10,740 since the early 1990s — a 158 percent increase. At private institutions, average costs have increased 96.6 percent during that same period, from $19,360 to $38,070.

Biden’s student debt cancellation plan was for the most part celebrated in liberal circles as a step in the right direction, although many pointed out that debt forgiveness needed to go much further to address the nationwide crisis.

“If Young Americans Can Access Free College… Will They Volunteer for the Armed Forces?”

Banks’s communications director, Buckley Carlson (son of conservative Fox News host Tucker Carlson), did not respond to a request for comment — but the congressman’s comments reflect a popular mindset among Army brass and conservative hawks.

In 2019, Frank Muth, the general in charge of Army recruitment, boasted that the student debt emergency played a primary role in his branch exceeding its recruiting goal that year. “One of the national crises right now is student loans, so $31,000 is [about] the average,” said Muth. “You can get out [of the Army] after four years, 100 percent paid for state college anywhere in the United States.”

Cole Lyle, former adviser to Senator Richard Burr (R-NC) and executive director of Mission Roll Call, a veterans advocacy group, penned an op-ed for Fox News in May calling student debt forgiveness a “slap in the face” to veterans because service members and veterans were purportedly more deserving of debt relief than the average civilian.

Lyle’s piece was shared by the late Representative Jackie Walorski (R-IN), who also argued forgiveness would “undermine military recruiting.” Mollie Hemingway, editor in chief of conservative outlet the Federalist, and the big-oil front group Citizens Against Government Waste, shared the piece as well.

In April, Eric Leis, a former department manager at the Navy’s Recruit Training Command, Great Lakes, bemoaned in the Wall Street Journal that debt forgiveness — and especially lowering the cost of higher education — poses a threat to the military’s ability to recruit.

“When I worked at Navy boot camp, an overwhelming majority of recruits listed paying for college as their primary motivator for joining the Navy. If young Americans can access free college without having to earn the GI Bill or sign up for follow-on military service, will they volunteer for the armed forces in adequate numbers?” wrote Leis.

“According to Rep. Banks, any relief regarding jobs, health care, childcare, housing, food, should be opposed on the basis it would hurt enlistment!” said Prysner. “While mocked, it does reveal the core of the Pentagon’s recruitment strategy: focus primarily on young people who feel pushed into the ranks by the difficulties of American life.”

Banks’s criticism comes during a tough year for military recruiting. The military is seeing its lowest number of recruits in the current fiscal year since the end of the draft in 1973, the military news outlet Stars and Stripes reported last week.

Earlier in August, the Army admitted it had only successfully recruited half its goal and is poised to miss its target by around 48 percent. Other military branches have also struggled to hit their annual goals, but according to Stars and Stripes, these forces are expected to just reach their target numbers by the end of the fiscal year next month.

But as Prysner points out, such recruitment struggles have nothing to do with college becoming easier to afford.

“According to the most recent [Department of Defense] youth poll, their top reasons are fear of physical and psychological wounds, fear of sexual assault, and a growing dislike of the military,” said Prysner.

The most recent poll, released earlier in August, found a majority of respondents — 65 percent — would not join the military because of the possibility of injury or death, while 63 percent cited post-traumatic stress disorder (PTSD) or other emotional or psychological issues. 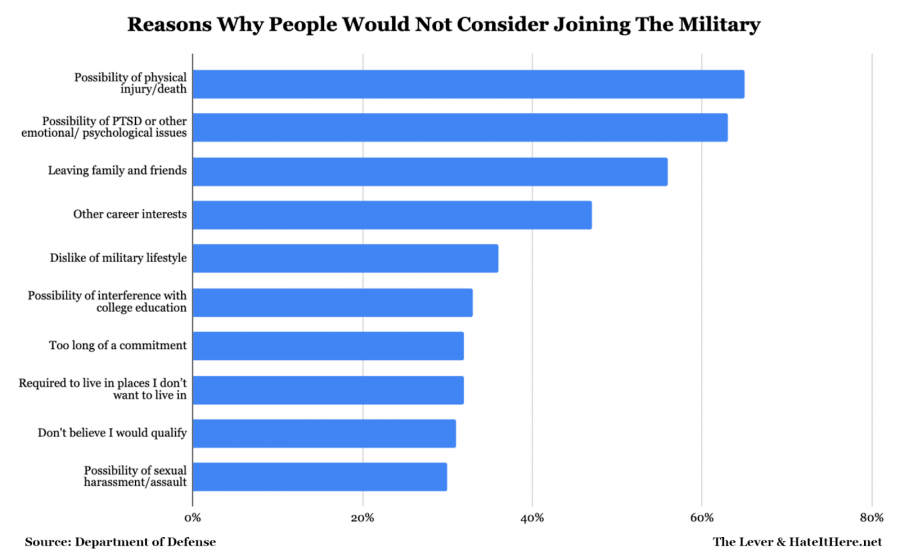 According to the same poll, the top reason why young Americans considered enlisting was to increase potential future pay, while educational benefits, such as those offered by the GI Bill, were the second most common reason for enlisting. 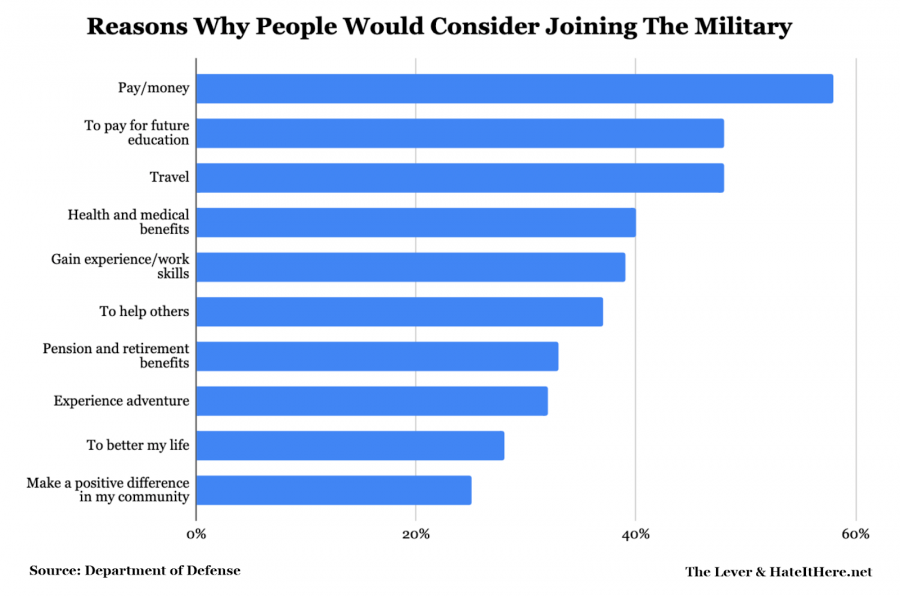 The public has become increasingly critical of the military, thanks in part to a lack of a national cause to rally behind, no looming presence of a serious external threat, and growing discontent with the American system. Some of that negativity has come from within the Armed Forces’ own ranks. In 2020, a video of active duty Army soldiers expressing frustration over their recruiters lying to them racked up millions of views. The clip illustrated how many young Americans are lied to in hopes that they’ll become pawns for the military industrial complex.

This is actually some of the saddest shit I’ve seen pic.twitter.com/Djw2lhZ8sF

To boost its numbers, the military has a long and well-documented history of targeting the economically disadvantaged and enticing potential recruits with its robust benefits package. Earlier this year, the Army released new ads specifically touting how service can fill holes in the country’s tattered safety net. Antiwar veteran groups and other peace advocates warn young people to be wary of the military’s recruitment tactics, especially its education benefits. While the GI Bill could potentially cover a majority of a recruit’s education, its benefits are not guaranteed.

“Even with the G.I. bill and tuition assistance, a lot of veterans end up with student debt anyway, and that’s what they really don’t tell you,” said political commentator and Air Force veteran Ben Carollo. “I think it speaks to how predatory military recruiting is. Because really it takes layers of lies.”

Beyond education, veterans still have to fight for many necessary benefits. Recently, Senate Republicans blocked a bill that would allow for military veterans to receive treatment through the Department of Veterans Affairs for medical issues — including cancer — caused by burn pits overseas, before begrudgingly supporting it after immense public pressure.

Carollo said she bought into the lies when she enlisted.

She, like many other Americans, saw the US military as “the good guys” who brought “freedom” around the world. She eventually came to see through the American exceptionalist fantasy and the false promise of benefits waiting for veterans.

“Sadly I had to learn these lessons the hard way and came out with a disability and trauma that now limits my ability to really use the degree I did get,” said Carollo. “Ultimately it feels like a bait and switch. The idea that we should keep people poor just to maintain that scam speaks to how evil our system is.”