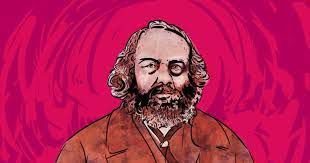 Taking the Mick: Bakunin in the 21st Century

A short introduction to some of the basic ideas of Bakunin and their relevance in the 21st Century.

Mick Bakunin was one of the most influential Anarchists of the Nineteenth Century. (1) Has this guy still got something useful to say in the Twenty-First Century? (2) Well, for starters Anarchism has developed and adapted a lot since his time. One of its strongest features is that it’s a theory, not an ideology. It’s flexible, not rigid. New concerns have gained prominence over time. For example, the anti-globalisation movement since 1999 or post-modernist-influenced strands of Anarchism. (3)

Another point is that there is no bible of Anarchism. There is no key person you have to read to be part of it. You can be an Anarchist and have never heard of Mick or anyone else. In fact, it’s possible to be an Anarchist and not be literate. You can also put a personal emphasis on just doing, rather than thinking it through to the point of inaction. A sensible approach is probably a balance. A bit of useful stuff from past thinkers but without being silly about it. Thoughtful action is good.

So let’s look at Bakunin and see if he has anything worth thinking about. First, let’s be clear. Bakunin has mostly been recognised as more of an activist than a theorist. (4) He only completed a single major work and even his short pieces remained unfinished. His writings are full of repetitions, digressions, and dead ends. (5) He had the sort of energetic personality that carried a book in one hand and a brick to throw at cops in the other. Or maybe he just got constantly distracted by accidentally dunking his beard in his vodka bowl? Here we will mostly look at his Revolutionary Catechism. Because of the sort of person he was, it’s worth thinking of it as just one piece of a jigsaw with some of the bits missing. It isn’t the definitive ‘last word’ on what he thought. Nevertheless, the Revolutionary Catechism is an important outlining of what Bakunin thought. (6)

One of the key features of Bakunin’s Anarchism is his emphasis on absolute freedom and liberty as desirable conditions for society. He defines freedom as “the absolute right of every adult man and woman to seek no other sanction for their acts than their own conscience and their own reason”. (7) So Bakunin sees humanity as capable of rational thought and for each member of society, to organise his or herself without external compulsion. For this reason, he is strongly opposed to conceptions of human nature based on metaphysical abstractions. He calls for “Replacing the cult of God by respect and love of humanity” (8) and rejected a political role for churches. The Catholic Church had a huge social and political influence in Nineteenth-Century Europe. In addition, the Orthodox Church was closely tied to the oppressive regime in Bakunin’s native Russia at the time. Before dismissing his focus as irrelevant today, it’s worth remembering the recent religiously influenced over-turning of Roe .v. Wade in the USA, Hindu nationalism in India, or the rise of the Taliban or ISIS.

Mick also argues that society has evolved beyond a primitive condition requiring divine authority and that the same applies to human authority. He advocates “Absolute rejection of every authority including that which sacrifices freedom for the convenience of the state” (9) With the Covid pandemic causing states across the world to exert all kinds of pressures on societies, Bakunin’s position makes a good discussion point as to how Anarchists can remain true to themselves while looking out for the social good. He certainly sees the state as a significant crusher of freedom. For example, he calls for “Abolition, dissolution, and moral, political, and economic dismantling of the all-pervasive, regimented, centralised State, the permanent cause of the impoverishment, brutalisation, and enslavement of the multitude”. (10) He then goes on to advocate the abolition of state control over education, the judiciary, bureaucracy, army, and police. (11)

George Woodcock was a Twentieth Century sympathiser of Anarchism who wrote introductory texts. He argued that all anarchists deny authority but not everyone who denies authority is an Anarchist. (12) It is a necessary but insufficient condition. He explains that Anarchism requires more than “unthinking revolt”. It also needs a critique that aims at social change towards a desirable future society. (13) He offers the following definition of Anarchism “A system of social thought, aiming at fundamental changes in the structure of society and particularly the replacement of the authoritarian state by some form of nongovernmental cooperation between free individuals”. (14) It’s a useful basic working definition.

Turning to the kind of future society Bakunin wants, he notes that all members of society would have the right to social support for “upkeep, clothes, food, shelter, care, guidance [and] education”. (15)This apparently extreme generosity, however, is crucially rooted in the idea that “whoever wants to live in society must earn his [sic] living by his[sic] own labour, or be treated as a parasite” and “Work must be the basis of all political rights”. (16)The distribution of wealth, therefore, is based not on need but on work performed. Mick Bakunin stresses people should be entirely free to associate in any way they like. (17) He is flexible as to whether work is performed collectively or by self-employment. (18) Mick also thinks about the gap between manual and intellectual workers and argues for a mixing of the two where possible. (19) He is pretty clear on these points but both sympathisers and detractors have seen his connecting of work and political rights as a potential form of tyranny and compulsion. (20)

Under Bakunin’s version of Anarchism, there is of course the option of a person without political rights as he has defined them, being expelled or choosing to leave a particular society. Bakunin emphasises the importance of decentralisation in the absence of the state. Given this, some hope might be afforded the idea that another body would take in such an outcast. Presumably, there would be a wide variety of economic organisms, with a degree of flexibility greater than under state systems. It is possible this would mean the various economic units would be at different levels of development. They would also possess different resources and organise in diverse ways. Logically this would mean differing expectations as to the minimum labour input required from society’s participants. The minimum level of contribution required could be extremely low in some instances. Thus the outcast from one community may represent an average person in another. The instances of true parasites in the terms Bakunin establishes could be so few in number in fact, that they are a non-issue for most intents and purposes. (21)

Another issue to consider is if society is based on work contributions, what about those who have natural aspects about them that make it impossible for them to work or can do so only in a very limited way? What happens with the elderly or the partially or seriously disabled? If we take Bakunin literally, these groups are unable to contribute. Would they, therefore, be ostracised and isolated? This sounds really undesirable.

The answer to this has partly been covered above. Perhaps the most sensible response to the problem is to step back and recognise again that no Anarchist is obliged to treat the writings of anyone as holy writ. There is really no obligation to adopt Bakunin’s interpretation wholesale without modifications. Its easy to imagine a society that is fundamentally based on the principles he advocates, yet doesn’t take an absolutist form. Its also possible that if he was re-animated and came back to life now, Zombie Mick might reconsider his own views on this. Anyway, a decent society could accommodate a way of functioning that is focused on labour as a basis for rights in regards to most categories of people, while recognising valid exceptions. Therefore a form of welfare would exist. (22)

This topic seems relevant today when you consider the brutal mistreatment of workers and refugees in many parts of the world. Workers contribute our labour yet we get far less than we give. We receive few advantages compared to the wealthy parasitic class that tells us what to do. It also highlights that Anarchism isn’t arguing for a ridiculously perfect utopian society. People are messy and complex. It does tend to show that overall it offers a better approach than the status quo.

Allied to economic decentralisation is the concept of federation. This means that the various economic and social units would voluntarily work together. (23) Bakunin says that the constitutions of federations would allow autonomy for the lower level units but only on secondary matters. Presumably the principle of ‘No Work, No Rights’ would still apply universally.

Federation is something that would require a lot of coordination and communication. In relation to the issues of decentralisation and federation, Woodcock claimed Anarchism intrinsically requires “a policy of simplification” . (24) Another Twentieth Century activist Sam Dolgoff convincingly argued that exactly the opposite is true, especially in relation to trends in more contemporary society (25). At present, we certainly have the technical means to achieve a high degree of complex interaction along those lines. In fact, there were already mass-scale experimental examples in the Twentieth Century that undercut such criticisms. For example, there was a short-term attempt at anarchist economic organising in Ukraine between 1917-21, (26) and a heavily anarchic economy developed in areas of Spain between 1936-39 (27)

There are other aspects of Bakunin’s ideas that could be mentioned. For example, he calls for the abolition of the patriarchal family and the discontinuation of marriage laws. (28) He also places great emphasis on the equal education of everyone in society. These freedoms however are contingent upon the flowering of his federalist paradigm. (29) It’s also fair to point out that in his personal life Bakunin was a bit of a bunghole but that doesn’t make his advocacy of gender emancipation and other points any less valid. He also had views about who could legitimately participate in revolutionary struggles in terms of what class or classes they belonged to. This put him in conflict with some radicals of his day. For example, he favoured the involvement not just of industrial workers but also peasants, artisans, and marginalised elements such as criminals. (30)

So to wrap up, you could read Bakunin’s stuff such as Revolutionary Catechism, and find ideas that are relevant for discussing some social problems we have today. He has views about religion, economics, and what political rights could be based on. On the other hand, many have written differing opinions on these topics from other Anarchist perspectives. Not everyone has taken his stance on certain issues and that’s fine. Some aspects of his thinking are problematic but at least can form the basis for debate. The product that can help inform action. Take what you find useful, and change or dump what you don’t. So it’s up to you to read him or not and accept his ideas or not. Which is kinda the point, isn’t it?

(1) The intention here is to discuss Bakunin’s views rather than provide details about his colourful life. If you do want a quick overview of that, check out Ruth Kinna, The Government of No One: the Theory and Practice of Anarchism, Milton Keynes (2019) pp. 274-6
(2) There is an interesting interview with Mark Leier, a biographer of Bakunin who responds to the same question, with some overlap but also with differences of emphasis and focus from the present article: https://theanarchistlibrary.org/library/anarcho-bakunin-for-21st-century-activists
(3) Ruth Kinna, Anarchism: A Beginner’s Guide, London (2005) pp.72-73, pp. 154-158
(4) James Joll, The Anarchists, London (1964), p. 86, Richard Sonn, Anarchism, New York (1992) p. 28
(5) Sam Dolgoff, Prefatory Note, in Sam Dolgoff (ed.), Bakunin on Anarchy, New York (1972) p.ix
(6) David Morland, Demanding the Impossible?: Human Nature and Politics in Nineteenth-Century Social Anarchism, London, (1997) p. 97

Taking the Mick: Bakunin in the 21st Century