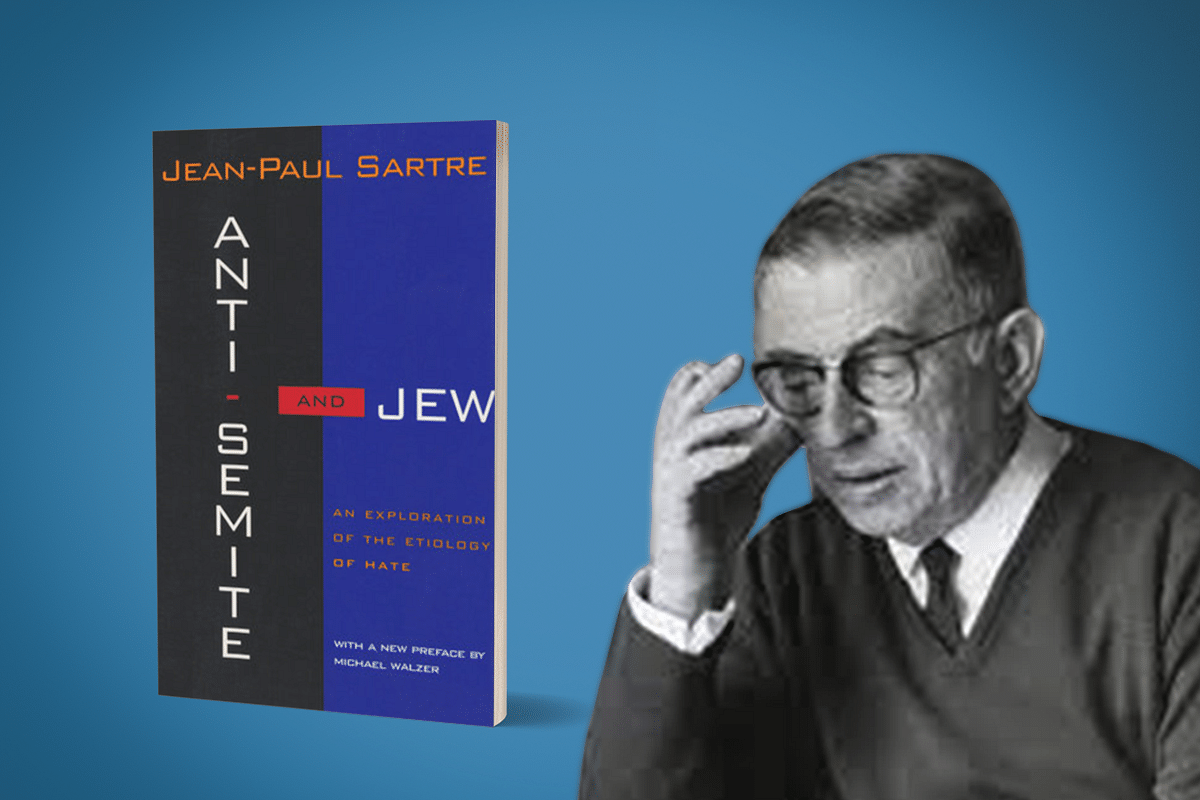 The Etiology Of Hate: Anti-Semitism And Anti-Tamil Brahminism

When you come face to face with public expressions of malevolence which defy conventional explanations such as difference of opinion or prejudice, you know it is time to go a bit deeper.

While my primary concern is the anti-Brahmin or more precisely the anti-Tamil-Brahmin (ATB) in the state of Tamil Nadu in India, this post is about sharing a well known analytical framework.

What is the in the depths of the mind? In the next post, I will describe how these dimensions manifest in the Dravidian ATB individual. This post is about introducing a particularly deep piece of work that already exists in the domain.

Jean-Paul Sartre — The Anti-Semite And Jew

Jean-Paul Sartre is one of the leading lights of the philosophical world known for his contributions to existentialism. A fierce thinker of the kind the world hasn’t seen, he even refused to accept the Nobel Prize for fear of unconsciously losing his free thinking.

In 1944, shortly after the liberation of Paris from German occupation, some of the French Jews started to pour back into Paris and surroundings.

In the wake of this jubilation, he was dismayed that hardly anyone in the media was talking about the Jews, who had somehow managed to scrape through the nightmare. Was it a fear of angering the anti-Semite?

This question prompted him to write a profoundly deep essay “Réflexions sur la question juive” later translated to English as “Anti Semite and Jew – An Etiology of Hate”.

I have read this multiple times and it stuns me how well it fits as a general psychological analysis framework even outside the specific European war context. I want to share this with my readers here.

This essay is divided into four parts roughly:

1) A psycho pathological analysis of the anti-Semite

3) the authentic and inauthentic Jew and

4) a discussion about the religious locality and Zionism. The first part, the psychology of the ant-Semite is a spectacular piece of work that still commands influence decades later. That is what I will be focusing on.

A PDF of this essay is available, Google for “Anti-Semite and Jew”

The only way to do justice to the essay is to post the whole thing. But here are some relevant excerpts. Once again, I encourage people to read the essay. You will thank me later.

Is It A Prejudice? An idea? An opinion?

Others [Fakenheim] have pointed out that anti-Semitism is more than just a prejudice, because unlike a genuine prejudice anti-Semitism does not seem to disappear when knowledge comes on the scene.

A ‘pre-judice’ is a ‘pre-judgment’ that is like a default position based on incomplete knowledge. An act of prejudice might be you assume someone is incompetent, then he performs well, then that prejudice disappears. Does this ring a bell?

There is no fact or correction you can make to the various ‘anti-pretexts’ to help. The pretexts of hate are themselves tenuous and might just be a wilful misinterpretation of events. If it is not a prejudice then what is it?

Here is where Sartre’s genius comes in — he says it is not a prejudice it is not even an opinion such as those that are protected by freedom of speech. Strong words on foreign policy, economics, abortion, social justice, religion, are opinions. Sartre:

If it isn’t prejudice, not is it an idea in the sense of something that can be protected by free speech.

What is it? Sartre calls it a “passion” a “criminal passion”.

He goes on to build his case that these involvement is not based on experience — a non-Jew has a bad experience at Furrier and hence hates all Jews instead of hating Furriers. A non-Jew loses a college spot where there are 10 non-Jews ahead of him but only the Jews ahead of him cause him to hate all Jews. A young actor without talent who accuses the Jews of keeping him out of key roles, they stack stories and experience such as this to justify their passion. He notes:

Then he goes on to buttress his point saying the actual historical record itself is not as important in front of the anti-Semite. You can see the parallel in Tamil Nadu Dravidian rhetoric — history does not inform the anti-Tamil-Brahmin (ATB) but it is the ATB that informs history. This can be seen by re-interpretation and fabrication in tune with the ATB sensibilities. More on this in my next. For now, here is Sartre:

Choosing To Think Wrongly. A Thirst For Impenetrability

One of the most brilliant lines comes next. Now the basis for the hate is on specious and thus tenuous ground. The reasoning defies logic, but the question is “How can anyone choose to think wrongly?” I ask this during so many interactions with ATB.

Sartre, explains that there is a longing for impenetrability — a solid mass like a rock that is impenetrable. The passion is a lifestyle choice, the anti-Semite chooses to be impenetrable by not entering the plane of logic. Sartre:

Trying To Reason And Debate With The Anti

How does talking to an anti-Semite by means of reason and debate? Do they believe in words and reason? Here is Sartre.. I find it stunning how directly it applies to the ATBs who come forward to defend their point of view.

How brilliant is Sartre that he could develop this psycho analytical model that applies so well to a completely different setting — because it is the psychology of passion. Here is how trying to reason with a anti-Semite will be:

The anti-Semite and indeed the ATB is a terrifying person, everyday people want to assuage his anger and make peace.

They don’t know the depths or the lengths or the violence potential that underlies this hate.

It is possible for someone to go so far out in hate speech without being backed by violence potential?

It is like people fear the madman because they don’t want to test him. What if he has nothing to lose?

The political benefits of anti-Semitism can be explained psychologically. Another question is how is a group made to hate another group?

The answer lies in the psychology of persuasion. Through an incessant bombardment of canards and defamation and elevating such demagogues to very high levels such as textbooks and universities and landmarks, masses can be persuaded.

The Jewish issue with Christ is just one such mechanism. There is a general mass psychology at play here. This is from a recent book by Amos Kiewe (The Rhetoric of Anti-Semitism)

Mass Psychology Persuasion Offering Yourself As The ‘Anti’ Of The ‘Undesirable’.

It is possible to see how by attributing the opposing view to community, then maintaining a barrage of defamation of that community, you can gain political power by simply persuading the public to support the NOT-community. The non-demonised.

This strategy is crude but works spectacularly in low grade societies. This is in fact the trump card of the ATB (Dravidians) — they just have to link any issue to Tamil-Brahmins and go to the people and persuade them to adopt the stand that is the opposite, ie, their own stand.

Feeling of oneness. For the few hours the anti-Semites or ATB meet in their halls and pour venom on the other. For those few minutes the king and the pauper are in unison. It is mostly found in the petty-bourgeoisie… in our context middle class white collar.

For the truly elite, they have better things to do since they are the ultimate beneficiaries anyway. They can even feed the beast and play the property games.

The Jew is absolutely necessary to the anti-Semite, if some really powerful Jew is nowhere to be found he will simply elevate the ones of far lower stature, because .. let’s see how Sartre puts is:

Anti-Semitism is not to be found among the workers, but ironically among the very same parasite professions.

Raising The Temperature Against The Common Enemy As A Uniting Function

Sartre, notes that political action cannot be directed against individuals. I suspect this means that you cannot bring a civil defamation case against a passionate hater whose expression is artistic freedom by penning a caricature, an obscene representation of women of the hated group, talking rudely etc.

It is the crowd, the mass. Even if you punished one that would be of a low quality when there are hundreds who will use that as proof of why their passion is even more required.

There are also political gains to be had. The temperature of anti-Semitic rhetoric can be adjusted to compensate for the presence of class or caste differences. The higher the temperature the more closer the lord and his servants are united against the common enemy.

Do you see the similarity here?

If you removed the ATB rhetoric you will just be a serf and your leader will be the owner — because that hasn’t disappeared at all.

Why would you otherwise bother about 3 per cent or 5 per cent when you have a classless 95 per cent?

In The Very Depths Of His Heart, A Criminal The final analysis is of passion, a passion of hate — that which is chosen of their own free will. They decide for themselves to think, argue, and reason wrongly. They are willing to accept the humiliation of being caught out. They want the annihilation. Hence Sartre terms anti-Semitism as not a prejudice, an idea, or an opinion but a passion— a criminal passion. He doesn’t create anything new even though he has it within himself to do so in a snap. He seeks only to cleanse what exists. What else can explain the Dravidian failure to simply solve to a great extent the ritualism by creating their own temples and own liturgies? This is how Sarte explains:

The Mild Ones, The Elites

Okay, so the profile of the anti-Semite is now complete. But that person is not everyone. Passion is a spectrum, those with such real passion are the true believers who will be few.

Those are the vanguard elements. What about everyday non-Jew people ? Those who do regular jobs, are not particularly offensive, nor inoffensive, at home with the hard anti-Semite in a flippant sort of way.

This non-Jew is described perfectly by Sartre – they are not persons at all. And as second-hand anti-Semites. They can drop in an instant and turn into an aggressive personality.

The second hand anti-Semites draw on the energy to gain a personality for themselves. Or to have that latent snarling aggression.

Time to wrap up this long post. I have not done justice to Sartre in the places where I tried to rephrase him. You need to read the entire essay for yourselves.

There is a certain contextual element here that makes it all the more relevant for Tamil Brahmins in particular to be aware of this work, but all others should do well to read it.

Any society in which such a strong element of hatred exists in the mainstream, that society cannot have rational discourse. All choices and debates can be easily shouted down by the ‘ANTI’ group by linking it to the primary demonised group.

I just covered 30 per cent of the essay here. The other part which I found fascinating was the description of the inauthentic Jew. A Jew who sheds his image to conform to the anti-Semitism. Sartre calls it ‘avenues of escape’ but exhorts the Jew to ask exactly what it is that he is running from?

More on this soon.

This article was first published here.