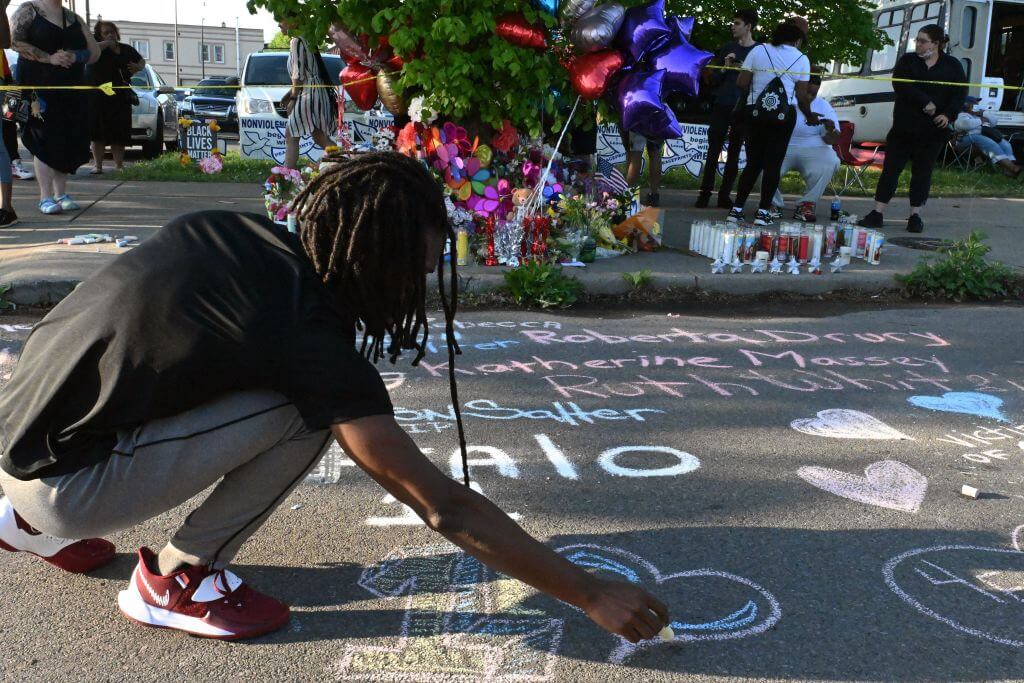 The gunman killed Black people. But his screed focuses on Jews.

When a shooter entered a supermarket in Buffalo, New York, and opened fire Saturday, killing 10 people, he was targeting Black people. In the diatribe he published to explain his motivations, though, he perplexingly focuses much more on another group: Jews.

But on the answer to the next question, he places more emphasis than he does anywhere else in the section. “Are you an anti-semite?” he asks himself.

“YES!!” he answers, in bolded all-caps. “I wish all JEWS to HELL! Go back to hell where you came from DEMON!”

A close reading of his rambling screed reveals a mind steeped in virulent antisemitism.

The main body of the 180-page document is split into sections, each focusing on a demographic group. The first section, on Black people, contains 11 pages of racist falsehoods. The next, on Jews, stretches to 30 pages, filled with rantings, infographics, memes, and pseudoscience. Additional sections on East Asian, Arab, and white people are less than one page each.

In total, the screed mentions Jews more than 100 times. The section on Jews also appears to be largely the original work of the shooter, rather than copied from the statement of the gunman responsible for a 2019 mass killing of Muslims in New Zealand, from which other portions of the document are taken.

The document explains that the shooter was motivated by the great replacement theory, the idea that elites are plotting to use immigration and the demographic shifts it causes to dilute the political and cultural influence of white, ethnically European Christians.

In many versions, including the one espoused by the Buffalo shooter, Jews are pegged as the elites masterminding the plot.

Rooted in xenophobic fears of a multicultural future, the theory has been gaining ground in increasingly mainstream conservative circles, including on Tucker Carlson’s Fox News show, in a campaign ad for Rep. Elise Stefanik of New York, and on Rep. Matt Gaetz of Florida’s Twitter feed.

The shooter begins the section by invoking the antisemitic conspiracy theory that Jews “control the mainstream media, many government positions, and international and global banking.”

He continues, leaning into antisemitic conspiracy theories, “they advocate for leftist ideology, and spread propaganda among the right. They spread their lies through all forms of media. They want us to divide ourselves by race, instead of goy and non-goy, like they already do.”

Surveys show that American Jews have a range of political ideologies, and that most Jews, whose ancestors have been in this country for generations, are highly integrated into mainstream American culture. There is a long history of Jewish solidarity with racial minority groups — a 2020 Pew survey found that more than half consider “working for justice and equality in society” to be essential to their Jewish identity.

The shooter then takes an even darker turn, calling for genocide in a disturbing echo of the Holocaust: “The real war I’m advocating for is the gentiles vs the Jews. We outnumber them 100x, and they are not strong by themselves. But by their Jewish ways, they turn us against each other. When you realize this you will know that the Jews are the biggest problem the Western world has ever had. They must be called out and killed, if they are lucky they will be exiled. We can not show any sympathy towards them again.”

The shooter purports to show a degree of tolerance for Jews as an ethnicity but directly attacks Judaism as a religion.

He misquotes Jewish sacred texts, claiming that the Talmud allows pedophilia and permits the exploitation of non-Jews. “Jews will tell you that they do not support these any more, but in reality this is what they all seek,” he writes.

One post features a photo gallery of staff members at six major American news outlets with Jewish stars next to each headshot (though some depicted are not, in fact, Jewish). Among those shown as working at The New York Times is Jodi Rudoren, who left there in 2019 and is now the Forward’s editor-in-chief.

Many are incoherent. One post falsely claims that 78 percent of slave owners were Jews. Another screenshots the Wikipedia entry of Black Lives Matter co-founder Alicia Garza, underlining the fact that she grew up with a Jewish stepfather. On another page, he compiles screenshots of news stories highlighting Israel’s role in the illegal organ trade, such as one from Haaretz from 2014. Racist images caricaturing Jewish facial features appear throughout.

The section’s conclusion reiterates antisemitic stereotypes, promoting a false narrative that Jews seek to divide and conquer other groups: “They will stop at nothing to ensure that they have full control over the goyim.”

He continues: “For our self-preservation, the Jews must be removed from our Western civilizations, in any way possible.”

A potent stew of hatred

Elsewhere in the document, the shooter paints a clear picture of his path to radicalization and the sources of his views.

He wrote that he was bored at the start of the pandemic, and started browsing 4chan, an anonymous internet forum known for hosting right-wing content, and within that website, /pol/, an antisemitic imageboard. “There I learned through infographics, shitposts, and memes” about the great replacement theory, “and that the Jews and the elite were behind this. From there, I also found other sites,” including the neo-Nazi message board The Daily Stormer, “where through data and exposure to real information I learned the truth.”

His words highlight how hatred festers on unregulated social media platforms, and how antisemitism merges there with racism and other ideologies into a toxic stew.

They also raise a question that the attacker asks himself in the Q&A: “Why attack immigrants when the Jews are the issue?” He answers, ominously, “because they can be dealt with in time,” adding later, “I can’t possibly attack all groups at once so might as well target one.”

The post The gunman killed Black people. But his screed focuses on Jews. appeared first on The Forward.