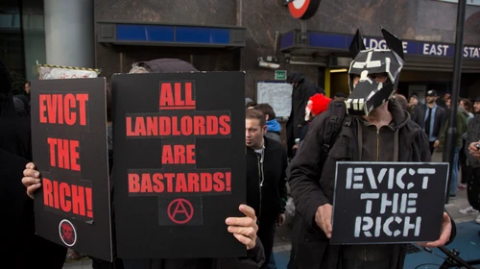 The Hilton Opened an ‘Anarchist’ Cocktail Bar in London. The Drinks Are £14.

From Vice News by Simon Childs

The hotel chain changed the branding of its "Freedom Cafe" in East London, after a local anarchist group complained that it ripped them off.

East London anarchists have accused the Hilton hotel chain of copying their radical image and history as branding for a luxury bar for “wanky City types” where cocktails cost up to £14.

The Freedom Cafe was supposed to be East London’s anarcho-communism themed cocktail lounge. When it opened in October customers could sit on a sleek leather chair and spend £13 on a vodka concoction named “the Russian Anarchist” after Peter Kropotkin, who escaped to London after being arrested in Tsarist Russia for subversive political activity. Or for just £11 they could order a virgin cocktail called “Why Work?”, “named after a provocative series of essays dissecting work, its forms under capitalism and the possibilities for an alternative society producing for our needs, rather than mere avarice”.

The cafe was named after the historic Freedom Press anarchist publisher down the road in Whitechapel. The bar’s menu was even made to look like a copy of Freedom Press, the anarchist journal published since 1886, with “Anarchist Weekly” written on the top of the page. It offered, “Anarchy, coffee, drinks and comfort food”. 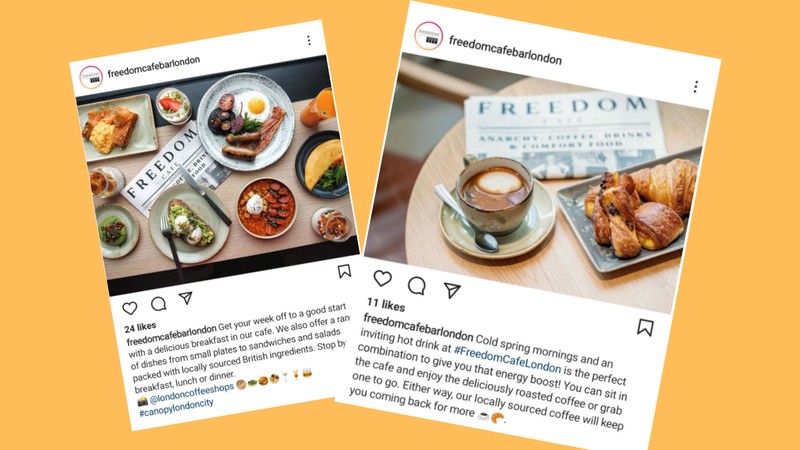 There was just one problem. Freedom Press – still an anarchist collective publishing books and running a bookshop in Whitechapel – say they were never consulted about any of this and are furious about it.

In an article anonymously published on the group’s Freedom News website, a member of the group explains how they thought it was an April Fool’s prank by a friend “knowing how much we despise the soul-drinking grey co-option of London culture for the consumption of wanky City types.”

Seeing the cafe as just the latest example of gentrification of the formerly working-class district, they added: “Surely these people weren’t actually boneheaded enough to wholesale rip off our name, photos and even the introduction to our history page on our own website for some mindless, dust-chewing corporate branding exercise?”

But that is exactly what was happening. Owned by the multinational hotel group Hilton, the cafe is part of Canopy by Hilton London City, “A vibrant hotel with an East London vibe.”

Hilton has been forced to make changes after the anarchists complained.

According to a now-deleted blurb on the cafe’s website, it is carrying on the history of London coffee shops, which were “a gathering place for writers, radicals, entrepreneurs and artists – a breeding ground for concepts that would go on to change the world.”

However, the local anarchists are not convinced that the Hilton hotel group, worth £11.87bn ($15.48bn), is committed to political radicalism. Darya Rustamova, member of the Freedom Press collective said, “Rather than changing the world, they are entrenching the exact kind of market capitalism which is ruining our city and many others like it.”

When VICE World News went to the cafe on Monday afternoon, the word “Freedom” had been covered up. The anarchist newspaper style menu had been replaced with a generic one. People in suits held business meetings. The cafe was still serving “the Freedom Burger”, which comes with chunky fries for a chunky £16.50. The lounge music, plush furniture and potted plants did not evoke much rage against the machine.

The anarchists have also accused the hotel of co-opting the area’s history in order to make money out of it with no benefit to the local community.

Rustamova said: “They are selling the local area as a tourist attraction because they want people paying to stay at their hotel.

“This is not a celebration of Whitechapel or Brick Lane or Spitalfields, this hotel is not for us, it’s for the City, it’s for anyone with deep pockets and some weird fetish for walking tours of the working classes. You can’t just say you’re honouring the beauty of the local neighbourhood if in reality you’re simply exploiting it. Our histories aren’t a fucking PR hook.”

When VICE World News approached Canopy London City for comment, it said, “The Canopy by Hilton brand aims to offer guests unique experiences inspired by the local neighbourhood. It was this brief that was given to a third party consultancy group of global repute, who were charged with creating a café and bar concept with references to the locality. In response, the agency proposed the Freedom Café and Bar concept, inspired by the local Freedom Press Publishing House.

“Canopy London City is extremely disappointed to learn that the consultancy did not approach Freedom Press Publishing House for their consent prior to creating the food and beverage concept. As a result, Canopy London City have established contact with Freedom Press Publishing House with a view to finding a mutually agreeable resolution as soon as possible.”

Hilton did not identify the third-party consultancy. VICE World News asked if Hilton supports anarchism as a political philosophy but did not get a response.