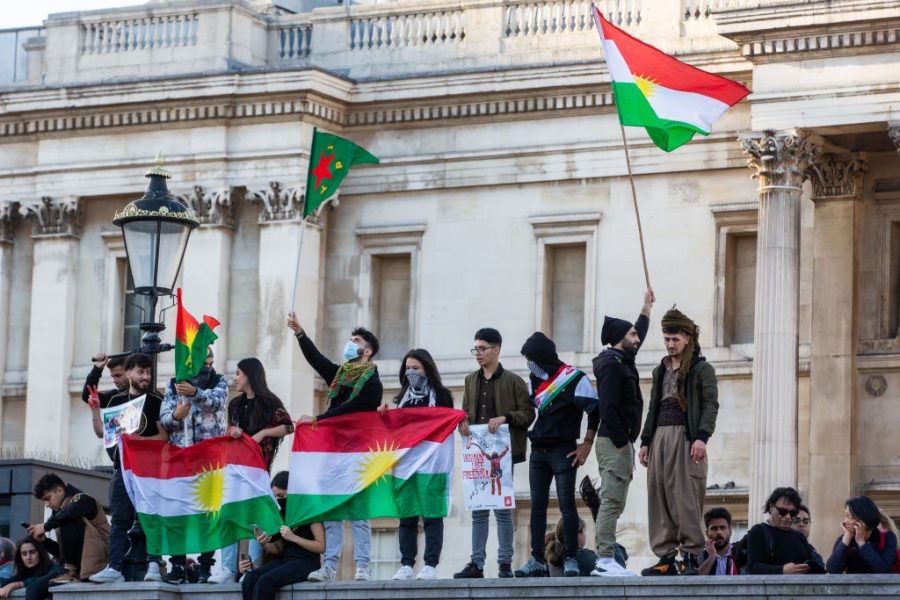 Protests in Iran have erupted following the death of a young Kurdish woman for “inappropriate dress” — laying bare not only the theocratic brutality of Iran’s government but the Iranian state’s historic repression of the Kurdish people.

On September 13, a twenty-two-year-old visitor to Tehran named Jîna (Mahsa) Amini found herself in trouble with Iran’s “morality police.” Her supposed crime was inappropriate dress, for which she was detained.

Such encounters are not uncommon in Iran, ruled by a reactionary government that hijacked the 1979 mass uprising against the county’s US-backed monarch, Mohammad Reza Pahlavi. However, while most morality police detentions are nonlethal, for Amini it proved otherwise. She fell into a coma in custody and died three days later. Authorities claim she suffered a heart attack, but evidence suggests she was severely beaten.

Amini’s death has proved to be a lightning rod, sparking a wave of popular protests across Iran.

As might be expected, given the antagonistic relationship between the Islamic Republic and the United States, this eruption of unrest has been greeted with sympathy in the halls of power in Washington, DC. Indeed, the gendered nature of the violence that led to Amini’s untimely death, and the role women have played at the vanguard of the anti-government protests, plays into a kind of “intersectional imperialism” that seeks to justify military and diplomatic escalation with Iran in the name of female emancipation from Islamic “barbarism.”

There is a kind of ‘intersectional imperialism’ that seeks to justify military and diplomatic escalation with Iran in the name of female emancipation from Islamic ‘barbarism.’

There are other false friends of the protesters: numerous groups among the exiled Iranian opposition are keen to claim kinship with the protesters, from “Crown Prince” Reza Pahlavi to the supporters of cultlike Mojahedin-e-Khalq. Perhaps the most striking example was journalist and Voice of America employee Masih Alinejad, who received a fawning New Yorker profile that proclaimed she was “leading this movement.”

The reality is that the rebellion is an outburst of popular anger directed at a stifling and repressive theocracy — a capitalist oligarchy dressed in the garb of a pious alim that endeavors to discipline the Iranian masses through the imposition of its vision of Islamic morality.

In many ways, it is Iranian women upon whom this draconian vision falls the heaviest — hence the central role of women in the protests. However, to reduce the “feminism” of the revolution to a question of individual self-expression — the “stealthy freedom” Alinejad has sold to self-satisfied liberals and anti-Muslim conservatives in the West — is to undersell the reasons why so many Iranians are taking to the streets.

In addition to broad anger at a sclerotic political order subservient to clergy and the security services, the economic situation in the country is looking increasingly grim. Inflation and growing inequality are ever-present realities for millions. Certainly, part of the reason is Washington’s escalation of economic and diplomatic warfare following the Trump administration’s 2018 decision to renege on the Iran nuclear deal.

But Washington’s imperious attempts to destabilize the Islamic Republic should not obfuscate the brutality of the government itself, nor the grievances that have driven people into the streets. Despite its “counterhegemonic” geopolitical stance and its “revolutionary” origins and rhetoric, the Islamic Republic is at its core a repressive, right-wing capitalist state.

Amini’s death at the hands of the Islamic Republic’s enforcers has served as a unifying symbol for an inchoate protest movement, bringing into sharp relief the travails of Iranian women. An Iranian-Kurd, Amini was a native of Saqez, a town in the country’s predominately Kurdish northwest. In fact, a contestation of sorts pertaining to the meaning and memory of her death is already manifesting in whether one calls her by her Kurdish name, Jîna, or her government name, Mahsa. Thus, her death has also raised another critical issue facing the country: the question of Kurdish national self-determination.

Amini’s death at the hands of the Islamic Republic’s enforcers has served as a unifying symbol for an inchoate protest movement.

Iran’s Kurdish minority makes up between 8 and 15 percent of the population and primarily resides in the provinces of Western Azerbaijan, Kurdistan, and Kermanshah, collectively known among Kurds as Rojhalat (Eastern Kurdistan). While sharing many traditions with other Iranians, including the dominant Persian majority, Kurds have their own linguistic, cultural, and religious distinctiveness.

Iran’s modern would-be nation-builders, from the Pahlavi dynasty to the Islamic Republic, have often viewed the Kurds as a potential threat to the country’s unity and meted out cultural and political repression. These political tensions were further compounded by the persistence of tribalism — a characteristic often exploited by the Iranian state to maintain its authority — as well as the more general economic underdevelopment of Iran’s Kurdish regions.

Given these material and political circumstances, Kurdish political mobilization in Iran has amounted to an act of resistance. At times, this has manifested in armed struggle and open insurrection. In 1947, following the Anglo-Soviet occupation of Iran, a short-lived autonomous republic was established in the town of Mahabad. However, Pahlavi forces — with, it should be noted, the connivance of numerous Kurdish tribes — crushed this attempt at self-rule after eleven months. In the 1970s and 1980s, Iranian Kurdistan once again became the center of armed struggle, first during the revolution that overthrew the shah and then as one of the chief centers of resistance to the new government. (One reason for their opposition was religious: the majority of Iran’s Kurds are Sunni; the Islamic Republic is Shi’ite.)

At the forefront of this phase of the Iranian Kurdish struggle were two left-nationalist organizations: the Kurdistan Democratic Party of Iran (KDPI) and the Organization of Revolutionary Toilers of Iranian Kurdistan (Komala). By the late 1980s, the rebellion had largely been contained, and much of the cadre of both parties had been forced to flee to either Iraqi Kurdistan or Europe.

In the 1990s and 2000s, Kurdish resistance in Iran sprouted in new directions. The 1997 election of the reformist presidential candidate Mohammad Khatami was particularly significant.

Even peaceful activism and agitation carries with it enormous risks.

On the political front, Khatami’s ascension opened the way for the election of Kurdish politicians to the parliament in 2000, although the intervention of the Guardian Council — a state body charged with vetting potential candidates — stymied this trend in subsequent elections. Still, civil society organizations promoting Kurdish language and culture as well as those engaging with a variety of social issues, from domestic violence to environmentalism, continued to flourish, albeit often on the borders of legality.

Armed resistance continued as well: in 2004, a new armed group called the Kurdistan Free Life Party (PJAK) — an offshoot of the Turkey-based Kurdistan Workers’ Party (PKK) — was founded. However, despite periodic clashes with the Iranian security services over the years, Tehran’s military control over its Kurdish dependencies has remained secure.

This control has been bought at the price of coercion and violence. Even peaceful activism and agitation carries with it enormous risks. For instance, in 2018, four environment activists in the border town of Mariwan were killed while attempting to extinguish forest fires caused by Iranian government shelling, and in 2020, a Kurdish language teacher, Zahra Mohammadi, was slapped with ten years in prison on trumped-up charges. (The sentence was later commuted to five years.)

Such cases are just a few examples that form a broader pattern of repression. According to a 2019 United Nations report, Kurds make up some 50 percent of political prisoners in Iran and are much more likely to be the victims of capital publishment.

At times, the Iranian state has attempted to win Kurdish allegiance though “pan-Iranian” appeals to shared history and culture. Former president Khatami declared that “nobody has the right to claim to be more Iranian than the Kurds.” Yet, as scholar Kaveh Bayat has observed:

One cannot be depicted as more Iranian than other Iranians and simultaneously be deprived of the right to be educated in one’s native language. One cannot feel untrammeled loyalty to the Shi‘i-identified nation-state when facing discrimination against the Sunni creed.

It is these contradictions within the Iranian nation-building process that the Islamic Republic, like the Pahlavi monarchy before it, have failed to overcome. Thus, although many Iranians view Amini’s death as a symbol of the general bankruptcy of clerical rule, for many Kurds, it is also perceived through the lens of ongoing national oppression.

Like much of Iran, Kurdistan has been in turmoil since the death of Amini, with mass protests and strike actions. The Iranian government response has been to round up protesters and unleash naked violence, even taking the fight into Iraqi Kurdistan by attacking exiled Iranian opposition group camps and destabilizing the local administration.

However, what marks out the protest movement in Iranian Kurdistan is the question of national self-government, as evidenced by slogans in favor of exiled Kurdish opposition groups and calls for pan-Kurdish solidarity (“From West to East, Kurdistan Is One Country”).

This nationalistic élan contains some risk. Geopolitical realities, and the military balance of power, mean that any isolated Kurdish rising is likely doomed to fail. For better or worse, the fate of Iran’s Kurds is conjoined to the rest of the Iranian population.

Yet although the Iranian state has long sought to polarize the question of Kurdish rights by raising the specter of “separatism,” Iran’s Kurdish movement has by and large sought to exercise national self-determination within the framework of Iran. The KDPI formula, for instance, is pithily summed up in the slogan: “Democracy for Iran, Autonomy for Kurdistan.”

Of course, this still leaves the question of what autonomy would look like in practice. Would it follow the more conservative model of a quasi-nation-state adopted by the Iraqi Kurds? Or might Iranian Kurds draw on the radical vision of “democratic confederalism” presented by the PKK and its ideological confederates in Rojava (northern Syria)?

Significantly, the PKK’s ideological synthesis — which ties the resolution of the national question to a broader political program rooted in anarchism, eco-socialism, and women’s liberation — made its mark not only on the protests in Iranian Kurdistan but across Iran, with Iranians adopting the PKK’s slogan of “Women, Life, and Freedom.” This cross-pollination is a positive sign that interethnic solidarity across the opposition movement is possible.

The Path to Unity

While the protests in Iran lack any clear leadership or political program, they’re animated by a democratic impulse and a desire for political freedom, economic justice, and female emancipation.

However, for Iran to make progress down the road toward liberal democracy, let alone socialism, any organized opposition to the Islamic Republic must embrace an egalitarian vision of the future. It must overcome the contradictions within the Iranian nation-building process, central to which is the resolution of the Kurdish question. To put it more emphatically, Iran must cease to be a “prison house of peoples” held together through violence and coercion.

As the Ottoman Kurdish revolutionary and democrat Abdullah Cevdet analogized, with regards to the future of another multinational polity:

Let us tie two men tightly to each other with the same rope. And let us place another two men side by side freely and at liberty to act upon their own personal initiative. Which have the greater link, the men tied together or the two who are freely placed next to each other? Even to answer this question is stupidity!

While the Ottoman Empire ultimately collapsed amid an explosion of ethnonational violence and militarism, there is still hope that Iran can avoid this fate. And were Iran able to resolve long-standing Kurdish grievances thanks to popular pressure, it would not only send reverberations across the greater Kurdish homeland but deliver an enormous victory for democracy in the Middle East.