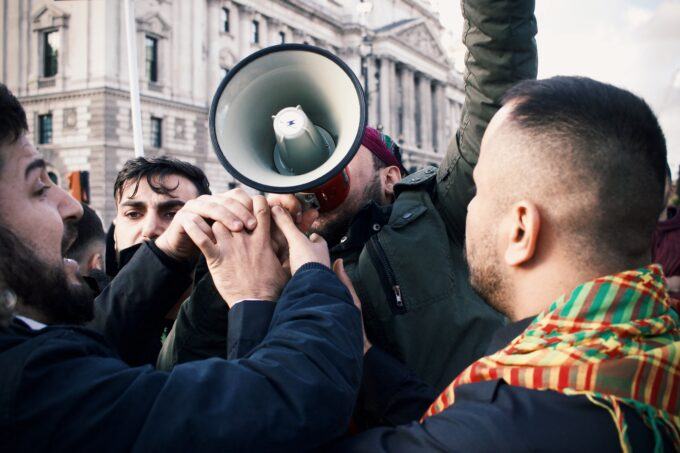 The Liberal “Aversion to Conflict”

An unusual article recently appeared in the Financial Times called “Liberals must overcome their aversion to conflict.” It is hard to know what the author is arguing in the piece, though it might be for less criticism of militarization. Throughout, he touches on the threats posed to the liberal order by both the “woke left” and the “post-truth right,” George Orwell’s killing of a wasp (apparent evidence that violence must go hand-in-hand with liberal greatness), Salman Rushdie’s stabbing, and Winston Churchill’s rejection of Nazism.

It seems that the crux of his argument is that liberalism puts “such stress on reason” that “it attracts those who are helpless at conflict.” Rather than fearing conflict, he states, liberals must acknowledge the occasional necessity of brute force and embrace it. Or, “Sometimes, at least, set a brute to catch a brute.” It is a foolish and naïve argument, dripping with an all too familiar British nostalgia for Empire. It must be noted that liberalism’s apparent aversion to conflict is a falsity. For those on top, the conflict inherent in liberalism may be hidden; however, liberalism is rooted in conflict and violence – it simply solidifies its forms of violent conflict as the normal state of affairs.

Liberalism goes entirely undefined throughout the article. Though the author states that “there is nothing innate about liberalism that mandates evasiveness,” he makes no suggestion about the things that might be innate to it. This is a telling and important aspect of the piece. Whatever great thing is under siege, seemingly on all fronts, is left to the reader’s imagination. He is not alone in this vagueness – evasiveness may not be innate to liberalism but it does seem to plague definitions of it. To speak of liberalism, that great catchword for modern pan-European society, it is necessary to better examine what it actually means.

Liberalism is widely traced to John Locke and John Stuart Mill, to Europe and Enlightenment, to Rationalism and Revolution; however, the history of liberalism is not a process of accumulation, where the first liberal thought spurred on the second and third and can, therefore, be traced from the roots like a vine. It is, instead, a retroactive canon building process. It is a process of perpetual reconceptualization. An original model of liberalism does not exist and cannot be discovered.

Unlike traditions such as communism or anarchism, liberalism was not considered to be a cohesive historical phenomenon by most of those involved in the “construction” of the tradition. It did not emerge through pragmatic debate as civilization progressed, as its proponents might allege. In fact, many so-called liberal thinkers, including Locke, were not widely recognized as a liberals until the twentieth century. Though such men wrote about liberty, the idea that liberalism was a specific, defining ideological or political category was not widespread until fairly recently.

It was only really in the twentieth century that liberalism became recognized as a political tradition. Liberalism was constructed by scholars and intellectuals who nabbed bits and pieces, here and there, which seemed to define a particular social order. America, which did not have a tradition of liberalism in the nineteenth century, became identified as the defining example of it by the mid-twentieth century. This occurred because the concept of liberalism was actively reconstructed by men such as Arthur Schlesinger Jr. to identify thinkers and ideas which justified or formed the dominant commitments of contemporary America, legitimizing capitalism and distancing ideas of liberty from communism.

Yet, liberalism should not be understood as a specifically American phenomenon. It simply has an American strain. This Cold War reconstruction retroactively produced a canon which is now accepted as legitimate historical development. The canon produced seems to lead naturally from the British political tradition to American democracy. Yet, this still leaves the specific definition of liberalism vague. Champions of liberalism, like the Financial Times author, might suggest that it is simply a dedication to reason and liberty – to freedom, rationality, and pragmatism. However, this is little more than a façade, which falls away with meaningful critique.

Foucault once wrote that “Quite simply, liberalism is English policy; it is the policy of English domination.” This policy, according to Foucault, established a distinct connection between a specific economic form of dominance, which is recognized as being grounded in particular historical circumstances, and a specific mode of governance. Foucault’s identification of liberalism as an English phenomenon is significant. The tendency to trace liberalism back to England is widespread among both its critics and its champions.

In European Liberalism, Massimo Salvadori writes that “Liberalism as a meaningful movement has existed since the time when in Great Britain people committed to self-government were numerous enough to acquire political influence,” developing momentum in the 1640s and culminating in 1688 with the Glorious Revolution. In Bramsted and Melhuish’s history Western Liberalism, the section “Roots of Liberalism” opens with an analysis of government in England following the 1688 revolution and of John Locke’s Two Treatises of Government. Similarly, in The Cambridge Handbook of Classical Liberal Thought, Ralph Raico writes that “the society that emerged in England after the victory over absolutism” was an “experiment” that served as a “spur to other nations.” Liberalism, according to these sources, seems to stem from the Glorious Revolution, when absolutism was defeated by self-determination.

Throughout the seventeenth and eighteenth century, as Foucault recognizes, England established a particular mode of dominance which enabled it to exert an immense degree of power and control through largely economic means. This mode of dominance, known as capitalism, relied primarily upon a particular structuring of social relations and a state structure through which these relations could be established and reinforced. Its emergence included a vast transformation of social relations and systems of governance, and propelled England into the position of extreme global dominance that it occupied until the early twentieth century. The Glorious Revolution allowed capitalists to appropriate state power – it was a victory for capital, not egalitarianism. It should not be forgotten that, at the time of the revolution, those in power were concerned with parliamentary democracy rather than egalitarian democracy. Its freedom is the freedom of the capitalist class to accumulate wealth.

It is no mistake that the period of history widely identified as the rise of liberalism significantly overlaps with the rise of capitalism. It is no mistake that they both have roots in England and its Glorious Revolution. Furthermore, the mid-twentieth century reconceptualization of liberalism largely coincides with the period in which America’s position of dominance is perceived to have surpassed Great Britain’s, establishing the United States as the predominant capitalist power in the world. This was also a period in which global powers were shying away from explicit advocacy of empire. Naturalizing, justifying, and governing capitalist dominance was key to this new conceptualization. Liberalism, now viewed as a tradition which overcame monarchical despotism, was situated as the antidote to totalitarianism and, even further, as the natural progression of civilization – its modern stage.

Liberalism is the art of governing capitalism. Capitalism is an inherently violent structure. It relies on seizing the means of sustenance from people and forcing them to labour in a hierarchical structure in order to purchase what they need to survive in an established market system. This involves establishing a repressive police structure which enforces adherence to this system. It is rooted in class domination. Furthermore, in order to establish capitalism in the first place, incompatible forms of life must be eradicated. This has often involved genocide, as in the case of Indigenous peoples across the Americas.

When discussing liberalism, it cannot be ignored that it is inherently violent so long as it is attached to capitalism. It also cannot be ignored that liberal, capitalist, societies have their roots in colonial extraction. England, for example, accumulated its immense wealth through colonial missions. In fact, the entire pan-European sphere, the liberal order, is built on the backs of the colonized peoples of the world. When imperialism fell out of fashion, pan-European states and their ruling classes managed to maintain structures of colonialism through economic means. Liberalism served to justify these structures. Domination and extraction still define this way of life. It simply takes a brief survey of twentieth and twenty-first century wars to recognize that liberal states do not shy away from violence.

It is no mistake that the great man championed by the author of the Financial Times piece is Winston Churchill. Churchill became “a household god” not during the Second World War – a war now used to erase his ills – but during the Thatcher-era. The Thatcher-era, that infamous neo-liberal exercise, was marked by brutality and intensified exploitation. Churchill has since become an icon of moral brutishness to those who pine for the resurgence of British imperial power. He is a symbol of British strength and righteous violence. The fact that he championed genocide, admired Mussolini, and was generally fascistic in character is conveniently ignored.

Liberal reason seems to contain a devotional inability to acknowledge realities which conflict with the liberal worldview – including those which reveal the true historical underpinnings of liberal thought. It is simply false to suggest that liberalism has ever been averse to conflict. Instead, conflict and violence are at its core. It serves, in part, to explain away, justify, or hide these elements of the social structures which it upholds.

In the sense that it is being used by the Financial Times, liberalism is little more than a veil. It is necessary to parse out what actually defines the social and historical order that the author believes is under threat. It must be asked what, specifically, the author thinks is being threatened by “tentativeness,” “cancel culture,” and “identity politics” – and what causes Orwell, Churchill, and militarization to seem like antidotes to these threatening elements.