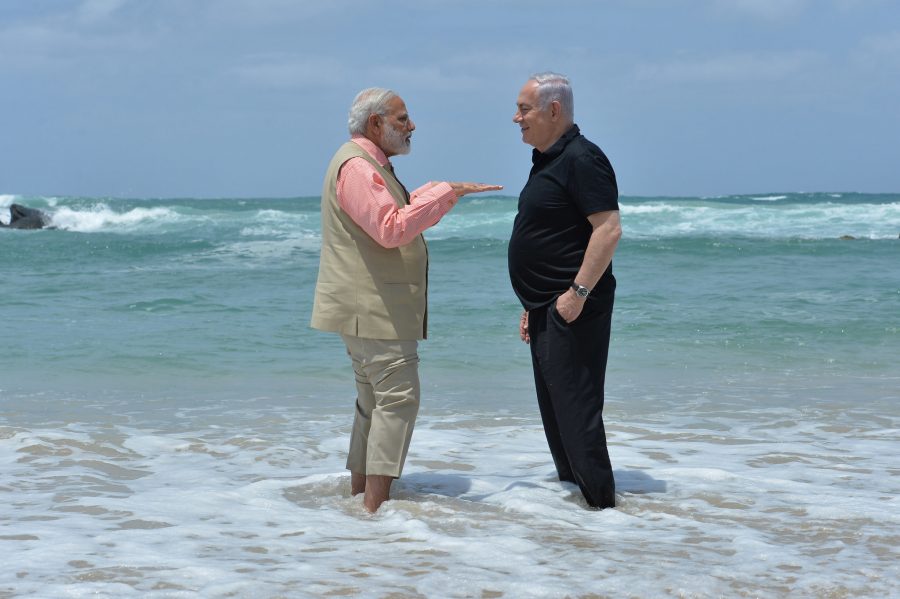 The sell-off of the Port of Haifa looks like a takeover by corporate interests. Yet the acquisition was led by a close ally of Indian premier Narendra Modi — showing its ties to Israel’s strategy of finding autocratic allies abroad.

Last month, Israel’s yearslong quest to fully privatize the Port of Haifa came to an end. India’s Adani Ports and Special Economic Zone Ltd (APSEZ) and Israel’s Gadot Group bought the port for a whopping $1.8 billion. The former company, clearly the major player in the deal, holds a 70 percent share. The port represents a key strategic point in Asian-European trade, given its location between the Suez Canal — one of the world’s largest trading thoroughfares, which enables annually “12 percent of global trade and 30 percent of global container traffic . . . transporting over USD $1 trillion worth of goods” — and the rest of the Mediterranean. While much has been said about the global geopolitical implications of this development, it was made possible by — and will have important effects on — Israel’s strategy of normalization and ongoing regional integration.

The deal was in many ways exceptional — and laden with symbolism. Coming in the immediate aftermath of the so-called I2U2 summit, in which the Indian, Israel, Emirati, and US governments pledged “to harness the vibrancy of [their] societies and entrepreneurial spirit to tackle some of the greatest challenges confronting our world, with a particular focus on joint investments and new initiatives in water, energy, transportation, space, health, and food security,” the deal’s political character was writ large. As if to really drive this reality home, the bid that ASPEZ and the Gadot Group put forward was a full 55 percent higher than that of its closest competitor and followed diplomatic pressure from the United States to sideline a Chinese offer.

It is clear, therefore, that far from being a simple economic process of privatization, the takeover of the port is also part of a major strategic vision shared by the countries involved: limiting the influence of China’s Belt and Road Initiative and increasing the economic, military, and political cooperation of US allies in the region as the latter continues the “pivot to Asia” initiated by Barack Obama. Further underlying the intrastate nature of the deal despite its apparent “private sector” character — a tried-and-true approach to limit popular pressure and outrage in recent natural gas export deals between Israel and its neighbors — is the person leading the acquisition: Gautam Adani.

Adani is a close ally of India’s prime minister, Narendra Modi, and has repeatedly been accused of being the recipient of unfair political favors during privatization bids and other acquisitions in India. Their alliance is long-standing: Adani stood by Modi in the aftermath of the 2002 anti-Muslim pogroms in Gujarat, in which over a thousand people were killed. At the time even much of India’s ruling class declared the latter persona non grata for his responsibility in the massacre.

So good is the relationship between the two men that between 2014, when Modi came to power, and 2020, Adani’s net worth increased by an estimated 230 percent, as he received preferential access to ports, airports, mines, and other key economic assets. According to Forbes, between 2020 and 2022 alone, his net worth again grew tenfold. The close relationship between the men was also visible internationally. In June this year, it became clear that Modi had leant on then Sri Lankan president Gotabaya Rajapaksa to award Adani a major energy project in the country. By purchasing the Haifa port, Adani is both opening the way to Europe for his own economic empire and serving Modi’s foreign policy goals.

The Haifa port deal is not Adani’s first venture in Israel’s economic orbit, either. In 2016, the Adani Group entered a collaboration with Israel’s Elbit Systems — the internationally renowned Israeli drone manufacturer, which boasts of its battle-tested technology (read: used against the Palestinian population in Gaza) and has recently been forced to shut down two of its UK-based facilities after repeated occupations by the Palestine Action group. A year later, Modi and then prime minister Benjamin Netanyahu, both barefoot, held one of the most surreal photo shoots imaginable on Tel Aviv beach to demonstrate their close alliance.

While it is right to locate the privatization of Haifa port — and the specifics of how it has taken place — within these broad, global, geopolitical processes, it is also part of Israel’s ongoing push to normalize its relations with the wider region. Starting in the late 1970s with a peace deal with Egypt, following the collapse of Nasserism, and accelerating in the 1990s, after the defeat of the First Intifada and the Oslo Accords, Israel has followed a strategy of economic integration, tying itself to the most autocratic regimes in the Middle East.

The discovery of natural gas in the Eastern Mediterranean and the US-sponsored normalization deals between Israel, Morocco, Bahrain, the United Arab Emirates (UAE), and Sudan have further accelerated this process. Major natural gas export deals have been signed with Jordan and Egypt (twice), while trade between Israel and the UAE has already exceeded $2.45 billion since. The two countries also signed a free trade agreement, as did India and the Emiratis. This laid the groundwork for the current privatization deal, which facilitates the development of a trade corridor (of primarily agricultural products) from India to the Gulf and then the Mediterranean — a perfect opportunity for all three partners, as the war in Ukraine, climate change, and global recession continue to disrupt food supplies.

The Haifa port is thus a key node in furthering ongoing processes of integration — both within the Middle East–North Africa region as well as between the region and its major trading partners. In fact, the port has played this role from its inception. Developed by the British as an exit point for Middle Eastern petroleum and other colonial goods, it remains an important nodal point in global world trade — if only because of its proximity to the Suez Canal. Moreover, a train line connects Haifa to the Jordanian border and from there to the rest of the region. While the current line stops at Beit She’an, just north of the West Bank, there has been repeated talk about prolonging it across the border and even further afield across the Arabian Peninsula. The recent privatization of the port and the increased trade it is expected to bring make the concretization of such a plan all the more likely.

While the close collaboration between some of the region’s most reactionary regimes does not presage anything good for the people of the region, these processes are not unidirectional. Ironically, growing regional integration has also increased the possibilities of renewed identification by popular movements throughout the region — borne out, for example, during the 2011 revolutions — of the connections between their own struggles against their repressive regimes and that of the liberation of the Palestinian people from Israeli settler-colonial rule. In Jordan, the recent Israeli gas deal drew massive popular anger. Ports, railroads, and agricultural production are dependent on the labor of thousands of people, and as the Modi government knows, they can also fight back. The more their oppressors and exploiters connect their economies, the more they also open the possibility for international solidarity and resistance from below.