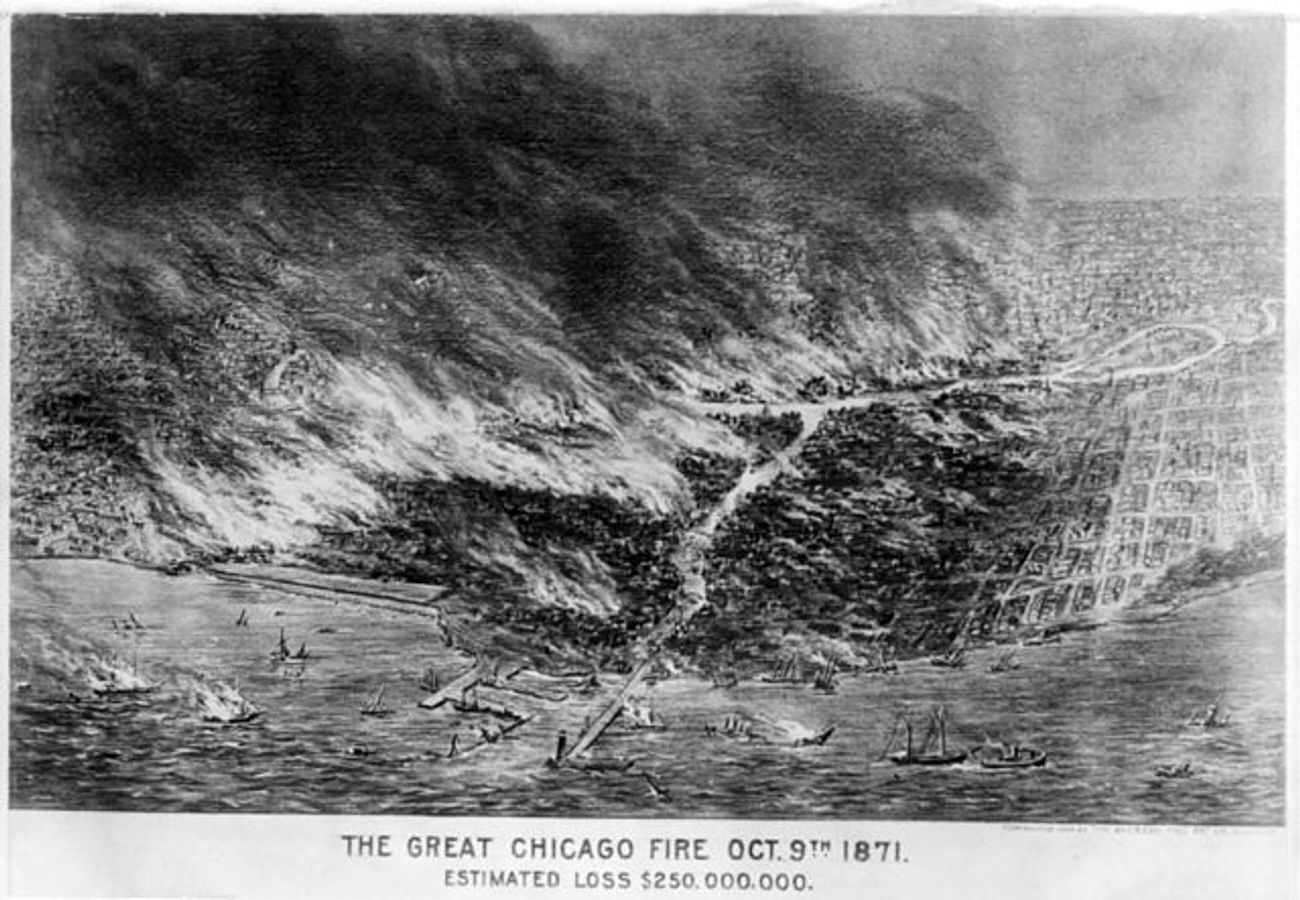 The secret Jewish history of the Great Chicago Fire

Editor’s note: The Great Chicago Fire devastated the city 151 years ago this weekend. To mark the anniversary, we are republishing this piece from 2021.

The spark of the Great Chicago Fire, which razed nearly 4 square miles of the city, killed hundreds and left 100,000 more homeless, can be traced with certainty back to Catherine O’Leary’s barn. We still don’t know what or who exactly started it, but one possibility is an 18-year-old German Jewish immigrant.

While the traditional culprit for the inferno, which started on Oct. 8, 1871 at around 9 p.m., and blazed for two days, is the O’Leary cow — and some experts blame the colorfully named Daniel “Pegleg” Sullivan — the first person to take full responsibility was a young gambler named Louis M. Cohn.

The admission became public only after Cohn’s death in 1941, by which time he had become a pillar of society and a prosperous importer and world traveler. A 1944 news release announcing Cohn’s endowment to the Medill School of Journalism stated that Cohn “steadfastly maintained” that the cow was not the cause of the fire. Instead, Cohn claimed the trouble started as he and several boys, among them one of the O’Leary sons, were playing a lantern-lit game of craps in the hayloft.

“[[O]ne of the boys accidentally overturned the lantern, thus setting the barn afire,” the release noted. “Mr. Cohn never denied that, when the other boys fled, he stopped long enough to scoop up the money.”

In Cohn’s will, Alan Wykes reports in his 1964 book “The Complete Illustrated Guide to Gambling,” he was less ambiguous as to his culpability: “When I knocked over the lantern, I was winning,” he said.

Cohn’s claim remains apocryphal, but his presence — and that of some 32 other Cohn households in the 1870 census — paints a picture of the Windy City’s Yiddishkeit at that moment.

While Cohn, a German Jew like some of the city’s first settlers, was busy gambling, others were observing Simchat Torah. The flames quickly spread to the synagogues but, as Irving Cutler wrote in his definitive “The Jews of Chicago,” most of the shuls were able to save their Torah scrolls.

The 1871 fire gave Chicago the resilient name the Second City — built on the ashes of the first. Apart from Cohn, the fire may have contributed to the fortune of another German Jewish immigrant: Sigmund Birkenstein, great-great grandfather of the Forward’s Editor-at-Large Robin Washington.

“I grew up with the oral history drilled into me of how they ran to the lake with the baby in their arms,” Washington said. “I have the family prayer book in which are written the names of Sigmund and Marianna Birkenstein’s then three children (eventually eight), showing the baby to be Rachel, born July 23 that year. I’ve also since discovered the address where they lived in what is now downtown Chicago — directly in the path of the fire.
“Sigmund before the fire had a rag and scrap paper business that eventually grew into a very successful scrap metal enterprise. I think I’m safe in adding the conjecture that after the fire, he found whatever paper there was that wasn’t burnt, leading to his fortune — which the family doesn’t have any more!”
Other Jews weren’t so fortunate. Three years after the Great Fire, a blaze originating from the shanty of Nathan Isaacson took a toll on the newly arrived Eastern European Jewish community. Several synagogues were lost, as were Black churches south of the Loop.

Press coverage at the time was anything but sympathetic to the victims — the Chicago Journal described the recently un-homed citizens as “peddlars whose pack-ridden backs are humped and known in every land: whom children fear, and dogs bark at in the country, and who, in a trade, can out-jew all other jews [sic].”

The writer concluded that the Jews “packed up with a unanimity quite unusual with even these natural-born wanderers, and, need it be said, unusually quick?”

Isaacson, whose shanty and barn were next to an oil factory, was arrested and charged with arson but never found guilty. He was likely a victim of his own city’s prejudice.

In the end, though, Jews took a leading role in commemorating the fire most people remember. Screenwriter Sonya Levian helped pen the script to the best-known film depiction of the conflagration, 1938’s “In Old Chicago.” Lew Pollack, the co-writer of “My Yiddishe Momme,” worked on the music.

The film follows the O’Leary family — Louis M. Cohn is nowhere to be seen.

The post The secret Jewish history of the Great Chicago Fire appeared first on The Forward.