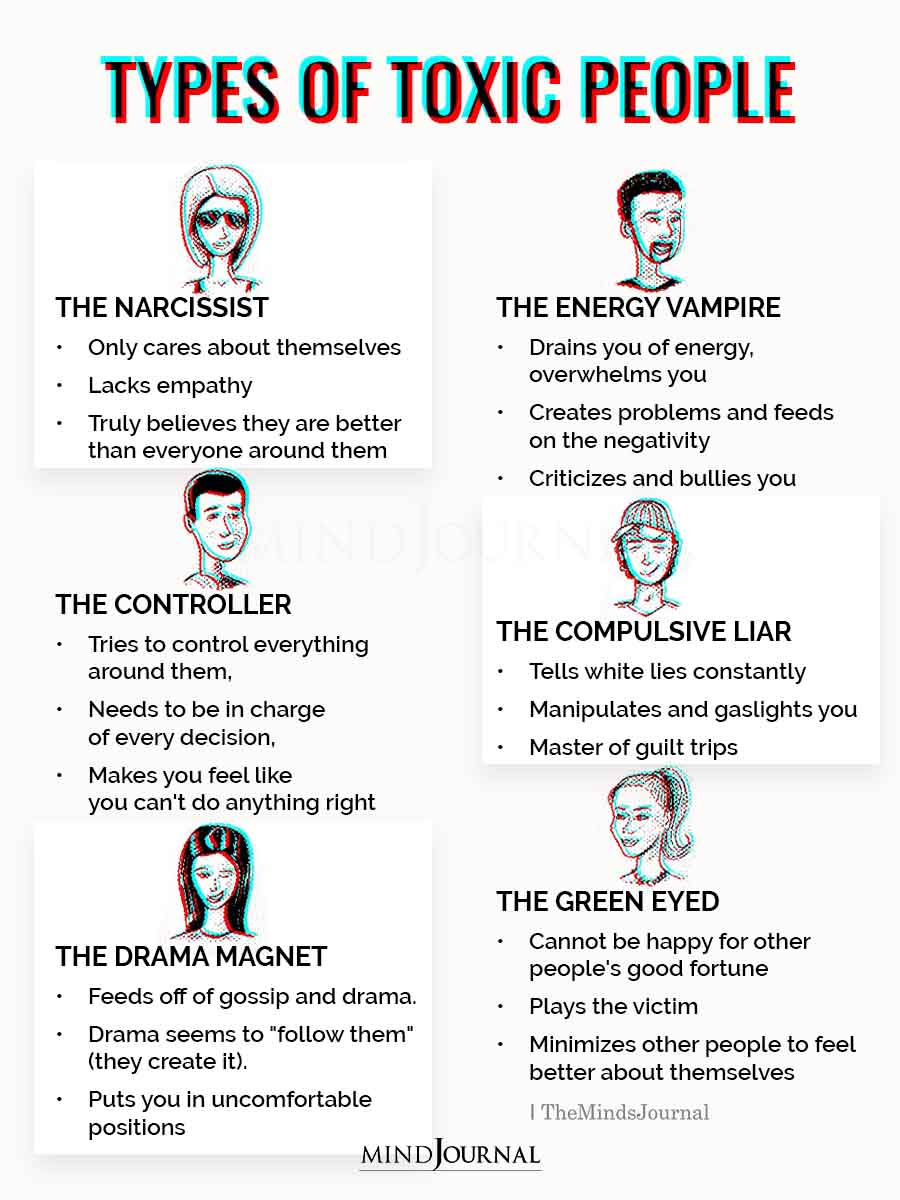 There are a lot of toxic people in the world, but there’s no need to let them get you down. It’s easy to feel like you’re surrounded by them, but it doesn’t have to be that way. If you know how to spot them and deal with them properly, you can avoid letting their negativity affect your life and relationships.

Here are six types of toxic people and how to deal with them:

The Narcissist: They are selfish and self-centered.

The narcissist is the most toxic of all toxic people. They are selfish and self-centered and always looking to be the center of attention, even if it means making other people feel bad about themselves. They will do whatever it takes to get what they want, even if it means hurting others. The best way to deal with a narcissist is to keep your distance from them as much as possible. If you can’t avoid them entirely, try not to allow yourself to be manipulated by their false charm or empty promises of friendship.

Having said that though, I still believe in second chances for everyone… Well maybe not for everyone but definitely for those who deserve one!

The Energy Vampire: They drain your energy, taking power away from you and making you want to give up on something important to you.

If you’re not careful, the energy vampire can drain your energy—and even make you want to give up on something important to you. You will know them when they complain a lot and expect you to fix their problems. They are often negative and pessimistic, so it’s easy for them to make others feel like they’re doing something wrong or that there is no hope in sight.

How to Deal: Try not to engage with these people or take on their negativity yourself. If possible, remove yourself from the situation by changing locations or leaving early if necessary. Also consider seeking out other positive people for support instead of getting weighed down by someone else’s issues all day long!

The Controller: they try to control others but don’t know how to control themselves.

Controllers are hard to spot because they often appear as the most caring people you know. They will go out of their way to make sure you have everything you need, but it’s all because they want control over your life. Controllers can be parents, bosses and even friends who try to control others, but don’t realize they are actually lacking self-control and thus have no right to tell others what to do. Controllers tend to be perfectionists who need things done their way, so if something doesn’t go right the first time around (and let’s face it—it never does), don’t expect them ever to admit that you did a good job or show gratitude for trying your best. They’re also very critical of other people’s work; if something isn’t perfect in their eyes (which is always), then it simply isn’t good enough for anyone else either!

If this sounds like someone close to you—a parent perhaps?—then start looking for ways around their controlling behavior so that any negativity doesn’t affect your mood or self esteem too much during difficult times at home or work!

The Compulsive Liar: they lie about everything all the time.

The compulsive liar is the closest thing to a sociopath that you’ll find in your daily life. They lie about everything all the time, even when they know you know they’re lying. They’ll lie about small things like the weather, and big things like their work, relationships, and finances. It becomes an addiction for them–they have to tell at least one lie every day or else they feel like something is missing from their lives (which could explain why so many politicians are compulsive liars).

The difference between a compulsive liar and someone who just lies occasionally or for fun is that this person lies for no reason–they’re simply addicted to it. And if you can’t trust them with mundane details of your life like where you were last night or what’s happening next weekend? How do you expect them to hold up under pressure when your mother asks if her new hairdo makes her look fat?

The Drama Magnet: They always find a way to make their lives seem more dramatic than they actually are.

The Drama Magnet is someone who always seems to find a way to make their lives seem more dramatic than they actually are. They can be found in any social setting, but they’re most likely to appear at work, school and other places where you might have a lot of younger people around.

They’ve got a story for every situation and usually it involves them as the victim or martyr. The Drama Magnet might be complaining about how their boss doesn’t respect them enough or how everyone else gets special treatment over them because of gender/age/race/religion etc., but when your time comes around for a promotion at work (or whatever), they will suddenly remember that there was some huge injustice committed against them by management years ago! How dare YOU get a raise after all I have been through?!?

You might think that these people are just self-absorbed narcissists who enjoy getting attention from others by playing the victim card, but what’s more likely is that you’re dealing with someone who may be suffering from mental illness—whether it’s depression, bipolar disorder or something else entirely—and has learned that being dramatic makes people feel sorry for them and give them attention when they need it most (and often don’t get enough).

The Green-Eyed Monster (aka the GEM): They are envious of what you have in your life, even if that thing is something you have worked incredibly hard for.

The GEM is the type of person who will steal your success, but complain about your failures. They are envious of what you have in your life, even if that thing is something you have worked incredibly hard for. They may even go so far as to pretend that they know how difficult it was for you to get there (“I know how hard it is to balance family and work!”).

The GEM’s jealousy can be rooted in insecurity or a lack of self-worth, so they feel threatened by any success that someone else has achieved. The GEM believes their own success has come at the expense of others’ failures, rather than through hard work and determination as everyone else does. These people are toxic because they will never feel satisfied with their own achievements and will always strive to take credit for yours instead.

Avoid toxic people and only engage with them when absolutely necessary

Avoid toxic people and only engage with them when absolutely necessary. The most important thing is to remember that there are other people in your life who love and support you, so it’s okay to spend more time around them.