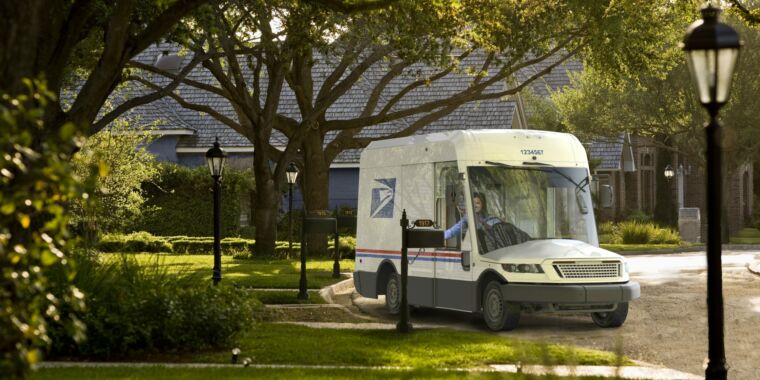 In 2021, the United States Postal Service picked a new delivery vehicle to replace its fleet of aging Grumman LLVs. However, the USPS drew immediate criticism, as the vast majority of a potential 165,000 Next Generation Delivery Vehicles, which will be built by Oshkosh Defense, would not be electric.

But on Wednesday, the USPS changed its mind and says it will now limit its NGDV purchase to 50,000 NGDVs, at least half of which will be battery-electric vehicles. Additionally, it says it will purchase 34,500 commercial off-the-shelf vehicles, “including as many BEVs as are commercially available and consistent with our delivery profile” according to the Federal Register.

Oshkosh’s NGDV has been designed to be fitted with either an internal combustion engine or a battery-electric powertrain. When the USPS first selected the NGDV, it said that only 10 percent of the order would be for BEV mail vans—Postmaster Louis DeJoy pleaded poverty on behalf of the Postal Service, which he said could not afford to purchase more BEVs.

This did not go down well with either the White House or the US Environmental Protection Agency, particularly since an EPA analysis determined that the diesel-powered NGDVs would only be capable of 8.6 mpg (28.86 L/100 km) when used with air conditioning, barely better than its current fleet.

The USPS rejected this analysis and said that if the NGDVs were operated without air-conditioning, the vans would average 14.7 mpg (16.00 L/100 km).

In March, the USPS placed an initial order for 50,000 NGDVs, with the slightly more ambitious plan that 20 percent would be BEVs, it said. But in April the Postal Service was sued by 16 states and several environmental groups that took issue with the USPS’s cursory environmental review that it used to justify purchasing so many more diesel NGDVs despite ever-worsening climate change.

Now the USPS says it will limit its NGDV purchase to those 50,000 vehicles and that at least half of them will be BEVs. The first NGDVs are due to enter service in late 2023. But it also says that it wants to purchase 20,000 left-hand-drive COTS vehicles, “including as many BEVs as are commercially available and consistent with our delivery profile.” Additionally it will purchase up to 14,500 right-hand-drive vehicles, but these will all be powered by internal combustion engines. The COTS purchase will be spread over two years, USPS says.

However, there’s bad news, too, as the USPS will keep 50,000 inefficient LLVs in service, “despite the significant operational risk, considerable maintenance costs, and the higher emissions of greenhouse gases and other air pollutants when compared to more modern vehicles.”