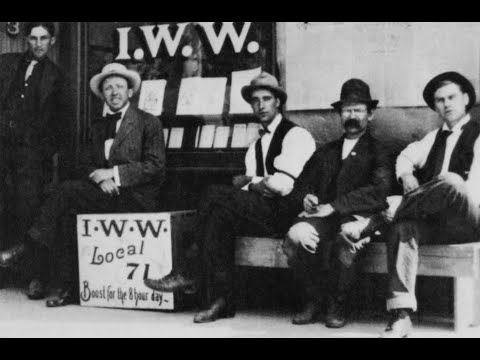 Teeming with rousing folk songs from the picket line and spirited one-liners from union men and women, Stewart Bird and Deborah Shaffer’s 1979 documentary “The Wobblies” collages together personal impressions from former miners, lumberjacks, stevedores, wheat farmers, silk weavers, and migratory workers — all members of the IWW (International Workers of the World) at the turn of the century — to create a multilayered look at one of the nation’s most radical, and most often overlooked labor organizations.

Ripe for rediscovery on the eve of a new 4K restoration that will be screened across the country in honor of May Day, the film endures as an astounding and essential portrait of American subversion as seen through the eyes of those who lived it.

The IWW, whose members were nicknamed “Wobblies” (or “Wobs”), was formed in 1905 with the goal of creating “One Big Union” made up of all workers, regardless of skill level, race, creed, gender, or country of origin (an audacious notion when most unions were off-limits to women and Jim Crow laws were in full-effect). With a philosophy informed by socialist and anarchist thinkers, the IWW was loathed by capitalist crusaders of the time, as well as more “established” union leaders like AFL president Samuel Gompers, who described it as “a radical fungus on the labor movement, those who could not fit in to a normal, rational movement.”

By 1917, the IWW was largely torn apart by internal conflicts, as well as sweeping hostility toward the “Red”-leaning organization and mass arrests for conspiracy and sedition. The organization does still exist today, though with a significantly reduced membership.

An oral history more than an official one, “The Wobblies” is focused more on rank-and-file members and their stories, rather than on creating an authoritative overview of the organization. As a result, the documentary is as unwieldy and imprecise as its name suggests, though this is far from a defect. The chorus of voices who lend their memories to the narrative are as unique and varied as the IWW itself. Bird and Shaffer sought to capture these early Wobblies’ recollections on camera before they were erased from history.

It’s mesmerizing to listen to men and women in their eighties and nineties as they recall detailed evocations of poor working conditions, the camaraderie of striking workers, and the traumatic violence of strike-breakers.

You’ll be charmed by the patchwork assembly of footage the filmmakers string together: A mix of impressive archival clips from the early days of the movie camera, and lovingly shot interviews from the late ’70s with the Wobblies themselves, interspersed with original illustrations and vintage anti-Wobbly propaganda, equal parts amusing and disconcerting. Footage capturing the physical work that Wobblies did for low pay and long hours — from stevedores hauling massive loads off ships, to lumberjacks sawing back-and-forth through a tree the size of a building — is especially astonishing.

Rather than coming together to form a cohesive whole, each Wobbly subject instead emerges as an individual over the course of the film, with their own personality and perspective on the events that unfolded — some more incendiary than others. One migratory worker explains how cutting off their labor through strikes was the most violent act they could commit, and the futility of sending in government troops to combat them: “Let them weave cloth with bayonets.”

As abrasive as some of the subjects can be, they all have an endearingly tender side, eager to sing along to old labor tunes: “Why don’t you stick together with the Wobblies in one band?” one man sings with fervor. “And fight to change conditions for the workers in this land?” In one clip, a former lumberjack brings out a musical saw which, when curved and played with a bow, emits a haunting whistle-like melody, not far off from the sound of a theremin. The film is suffused with musical interludes like this, which manage to transmit the Wobbly spirit better than any footage or interview can.

Watching “The Wobblies” now, as workplaces large and small struggle (and sometimes even succeed) to organize for better working conditions, it’s inspiring to see the grit and determination of these men and women working together over a century ago. They laid the groundwork for many of the labor laws we have today, but were fighting for the same things workers are still reaching toward — fair wages, shorter hours, and equal pay. They refused to compromise, and were often labeled as rats, rabble-rousers, bolsheviks, and criminals because of their staunch beliefs.

But as you listen to the Wobblies tell their stories, laughing to themselves as they reminisce or singing ardently to the camera, it’s clear that they’re the same people who stood up boldly to the ruling class with a loud message and an unflinching sense of solidarity.

“The Wobblies” is now playing at The Metrograph. It will screen in theaters across the country on May Day, Monday, May 1.