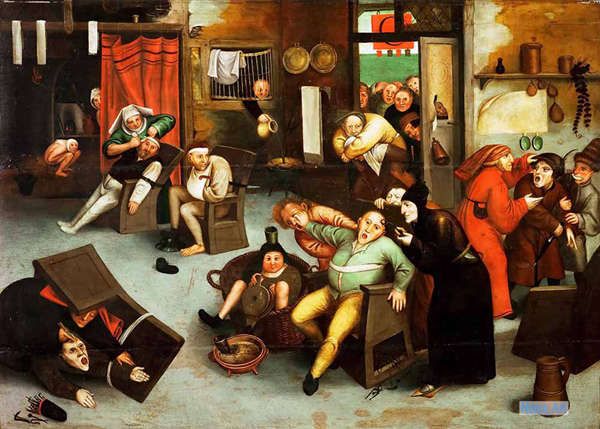 Theses of the Socialist Patients’ Collective

Malaise is the “new social issue”, they said in the Espai en Blanc collective, affirming a desire to live against the death that they give us in life. Our illnesses are a territory of investigation, exploitation and resistance. Psychic crises are the point of view of the antagonism of the symptomatic multitudes, because in the rebellious force of our symptoms a common intimacy is elaborated. They are not “problems” that we should cure. They are the marks and energies of mutations. What do anxieties, depressions, insomnia, apathy, anorexia tell us about our ways of living and dying? How can we appropriate the forces and knowledge of disappointment, failure, delirium, hatred and rejection? When the politics of capital is management of emotions, brains and desires, power becomes narco-therapeutic control. But our symptoms resist: they do not want to fit into the management of chaos. What is today a collective psychic liberation, capable of conspiring with our fragility? Are we capable of conquering a new secrecy, a new sensuality, another kind of aggressiveness? An “alternative hedonism” where the politicisation of our ill-being is affirmed as the reverse of the invention of new enjoyments, leisure and fantasies?

In this bio-psychic situation of mental health crisis, we recover the “Theses of the Socialist Patients’ Collective” and Jean-Paul Sartre’s preface to the book Turn Illness into a Weapon, written in 1970. In the first text they state that “mental illness” is a “productive force for capital”, since it is a “precondition and result” of capitalist social relations. However, if “the disease” manifests itself as a “protest of life against capital” it can be a “revolutionary productive force for human beings”. The psycho-biopolitical strategy of this group is to turn “the illness” into a territory of resistance against capital, directing the forces of suffering against the structural causes that make capitalism a system that produces deaths, illnesses and “mental disorders”. In the second text, Sartre discusses the cruel optimism of the “cure” in psychiatry and psychoanalysis, showing that the political challenge is to bring “illness to its culmination, to the point where it becomes a revolutionary force”.

Eleven Theses on Illness of the Socialist Patients’ Collective

1) Illness is the presupposition and the result of capitalist relations of production.

2) As the presupposition of capitalist relations of production, illness is the productive force for capital.

3) As the result of capitalist relations of production, illness, in its developed form as the protest of life against capital, is the revolutionary productive force for humans.

4) Illness is the only form of “life” possible under capitalism.

5) Illness and capital are identical: to the degree capital is accumulated – a process which goes hand in hand with the destruction of human work, known as ‘destruction by capitalism’ – the spread and intensity of illness increases.

6) Capitalist relations of production involve the transformation of living work into dead material (goods, capital). Illness is the expression of this continually self-expanding process.

7) Illness is, like concealed unemployment, the crisis buffer of late capitalism in the form of social security contributions.

8) In its undeveloped form illness is a limitation, the inner prison of the individual.

9) If illness is taken away from the administration, exploitation, and custody of health care institutions and emerges as the form of patients’ collective resistance, then the state has to intervene and patients’ lack of an inner prison will have to be addressed with external, “actual” prisons.

10) The healthcare system can only deal with illness under the premise that patients lack any rights at all.

11) Health is a biological, fascist fantasy whose function in the heads of the stupid and stupid-makers is the concealment of the social conditions and social functions of illness.

I read your book with great interest. I found it to be not merely the only possible radicalization of the anti-psychiatry movement, but also a coherent praxis which aims at transforming and supplanting the standard “treatment methods” in mental health.

In general, you see the same feature in capitalism that Marx understood as alienation to be illness. In that you are right. In 1845 Engels, in The Conditions of the Working Class in England wrote that through capitalist industrialization a world was created, “in which only a race of people can feel at home who are dehumanized, degraded, intellectually and morally debased to the level of animals, and are physically morbid.”

Because capitalism’s atomizing powers systematically and permanently cripple a class of people into vassals – externally and internally – it’s understandable that the totality of people of whom Engels speaks, who had been stricken by illness, can be understood as the unity of harms that come with wage-dependency and as the revolt of Life against these harms which reduce people to the status of objects.

Since 1845 the relationship has fundamentally changed, but the alienation remains, and it will last as long as the capitalist system. It is, as you say, “assumption and result” of the relations of production. Illness – you point out – is the only possible form of life in capitalism. In fact, the psychiatrist, who is wage dependent, is a sick person like each of us. The ruling classes merely give him the power to “cure” or to hospitalize. Cure – this is self-evident – can’t be understood in our system to mean the elimination of illness: it serves exclusively as the maintenance of the ability to go to work where one stays sick. In our society there are the well and the cured (two categories of unwittingly sick people who fit the norms of production), and on the other hand those recognized as sick, who are rendered incapable of performing wage work, and whom one sends to the psychiatrist. This ‘policeman’ begins by placing them outside the purview of the law by denying them the most fundamental rights. He is clearly an accomplice of the atomizing powers: he approaches individual cases as if psycho-neurotic disturbances were the personal flaw and fate of an individual.

Then he compares the sick – who in their distinctive features appear to be alike – studies the different behaviors, which are merely forms of appearance – and brings them together so that they form a nosological unity which he treats as different illnesses and then submits to a classification system. The sick person qua sick person is thus atomized and placed into a separate category (schizophrenic, paranoid, etc.) in which he encounters other patients but who can have no social relationship to him since they are all viewed as particular examples of the same psychoneuroses. You, on the other hand, have made it your goal – through these many publications – to penetrate to the fundamental collective cause: “mental illness” is unavoidably connected to the capitalist system which changes labor power into a commodity and those who are dependent on wages into things. (Objectification). It’s clear to you that the isolation of the sick, their atomization, which is originally determined by the relations of production, can only continue to the extent that patients in their revolt are still unclear about their demand for another society. To counter that it’s necessary that they be together, that they reciprocally raise each other’s consciousness and incite action, in short that they form a socialist collective.

And since the psychiatrist is also a sick person, you refuse to see the patient and doctor as two individuals who are naturally separated. This division has always resulted in turning the psychiatrist into the sole signifier (determining) and the patient into the sole signified (determined) and thus into a pure object. In contrast, you see the patient-doctor relationship as a dialectical unity which is present in each of them. Once patients have unified, then, within this dialectical relationship, depending on the circumstances, one or the other is the determining moment of the relationship, namely to the extent the patients either get stuck on the reactionary moment of the illness or else revolt against it and become aware of their true needs which are suppressed and deformed by society. From the knowledge that illness is, in all its forms of appearance, a general contradiction, and that each individual at the same time is both signifier and signified, it follows for patients that they must unify so that they divide and keep separate the reactionary moments (e.g. bourgeois ideology) and progressive moments (demand for a different society whose highest goal is the person and not profit). It goes without saying that this collective isn’t to be seen as a cure, because capitalism produces illness in every person and “psychiatric cure” only means a reintegration of patients into our society. Rather the collective seeks to bring illness to its culmination, to the point where it becomes a revolutionary force through a shared consciousness.

What’s exceptionally impressed me about the SPK [Socialist Patients’ Collective] is that the patients, without fixed medical roles – without a fixed pole of meaning – produce human relations and thereby mutually help each other to become conscious of their situation, in which they see themselves in the others’ eyes, i.e. they treat each other as subjects in the sense of signifier-signified. In the modern form of psychiatry, psychoanalysis, the patient looks at no one and the doctor sits behind him to register his impressions, and orders them as he, the doctor, sees fit. This spatial predetermination of the doctor-patient relationship puts one person in the position of pure object and makes the second into absolute meaning giver who deciphers the speech of illness through a hermeneutic whose secret he alone claims to know. I am happy to have experienced the actual progress that the SPK represents. Given the condemnation of your work I also see that it exposes the harshest repressions by capitalist society and not only the power of the representatives of culture, but also that of politicians and the police who have to unleash their power against you. You will have to fight with all available means because the rulers of society count on hindering the continuation of your practical work, even if they have to charge you with being vile conspirators. You won’t be judged by silly arrest charges, though, only by the results you achieve.